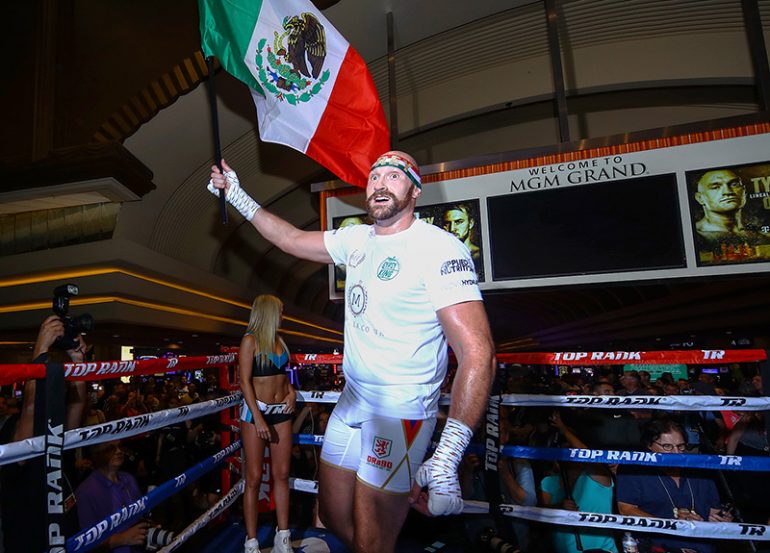 LAS VEGAS, Nevada – Tyson Fury did what Tyson Fury does and created a carnival atmosphere as he marked the start of fight week in Las Vegas.

The Ring Magazine’s No. 1-rated heavyweight is in town to take on Sweden’s Otto Wallin and he happily took center stage at the public workouts at the MGM Grand. 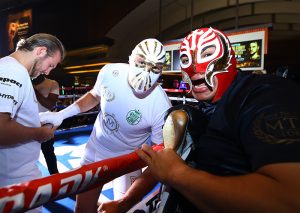 Few boxers get into the spirit of a media event like Fury. Photo Mikey Williams / TOP RANK

Wearing a white luchadore mask, and with camp insider Timothy Allcock waving at Mexican flag, Fury worked the pads with trainer Ben Davison and shadowboxed while playing to the gathering crowds.

It’s Mexican Independence Day weekend so Fury has found his theme of the week.

“I was here only eight weeks ago, now the Gypsy King has returned to his hometown,” said Fury. “I’m going to put on an exhibition. We’re going to stand toe to toe and smash each other to pieces.”

Wallin had already done his workout. With trainer Joey Gamache wearing trainers on platforms to present his southpaw charge with a higher target, Wallin worked on pivoting off the front foot and told the crowd he felt a win on Saturday was his destiny.

“I feel like finally the time has come,” he said. “I’ve been working for this for a long time. I want to be the best, I want to fight the best. I’ve got this opportunity and going to take it with both hands.”

Aaaand THAT is how you enter the building to headline Mexican Independence Day Weekend when you are @Tyson_Fury – El Rey de los Gitanos. ??#FuryWallin | SATURDAY | @ESPN+ pic.twitter.com/9UCBUdzgaV

Promoter Bob Arum harked back to when another Swedish heavyweight caused a huge upset, when Ingemaar Johannson stunned Floyd Patterson.

But it’s clear Fury is his man. 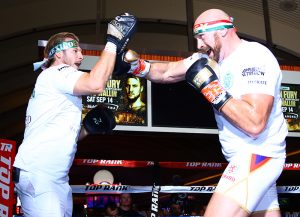 “People are seeing things that they haven’t seen since Muhammad Ali,” Arum commented. “You’re seeing a great fighter who can connect to the people and he’s a real showman.”

Fury-Wallin tops the ESPN+ show but undercard fighters also were given time to workout in front of fans.

“It’s an honor,” said Zepeda, of boxing in Las Vegas. “I’m ready and the fans will see a great fight.

Asked about the rivalry between their respective nations, Zepeda said it makes the contest more exciting.

“It’s going to be another classic,” he said.

“We are going to give it our all and it will be a Mexican show on Saturday,” said Navarrete.