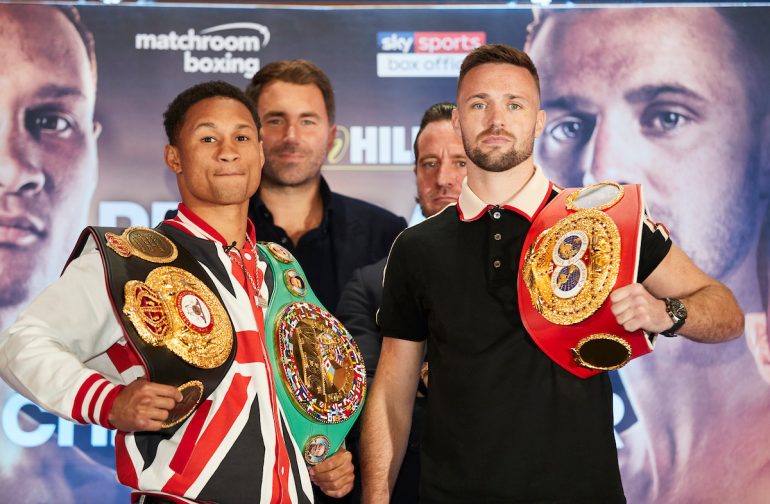 Taylor (right) and Prograis are both armed with 140-pound world titles. Photo by Mark Robinson
09
Sep
by Ring TV

Good afternoon everyone, thank you for being here today for a very special press conference ahead of our huge show on October 26 at The O2 Arena, live on Sky Sports Box Office in the UK and DAZN.

What a card, what a main event and what a group of fighters we have here today. The Unification match up, the Ali Trophy, The World Boxing Super Series Final between Regis Prograis the WBC Diamond, WBA World Champion and Josh Taylor the IBF World 140lb champion. It’s an absolutely brilliant fight, I was lucky enough to be there in Glasgow when Josh Taylor won the World title against Baranchyk in the Semi-Finals and I am delighted to be working alongside Kalle Sauerland and the WBSS to bring this to Sky Sports Box Office on a huge card.

You have only got to look at the names, I feel a bit bad that these guys are on a bottom table if there was such a thing. Three-weight World Champion Rick Burns, former World Featherweight Champion Lee Selby, Conor Benn, Yves Ngabu, Lawrence Okolie brilliant European Cruiserweight match-up as well and of course Derek Chisora against Joseph Parker. The two came head-to-head in Los Angeles last week, we’ll be bringing you exclusive content of that. Parker is now in camp, he’s underway.

It’s great to be in London, it’s great to be putting this fantastic Ali Trophy final on and we have to thank Matchroom and Sky Sports Box Office for providing this great platform at The O2 in London. The atmosphere there is incredible and is fitting for this super final. This is it, the Champions League of boxing, the Super-Lightweight final. As a fan this is my peak, this is the one that when we set it out this was the golden final. The ticket to the Ali Trophy and it is a dream to have both guys, two undefeated and very young fighters with huge personalities. Two fighters who will come forward, both slick in different ways and both amazing to work with. It’s not often you see the best going against the best, this is one of the fights of the year and is an amazing card from top to bottom.

I’m happy to be here, shoutout to Josh Taylor. This is going to be the third Champion I have boxed. I have beaten the British Champion, beaten the Commonwealth Champion and I am looking forward to beating the European Champion next. I’ve seen a lot of interviews with him and I like the way he speaks, he speaks very confidently. I’m just looking forward to going through training camp and then going to work.

It is going to be a very exciting fight, he has got a style which is opposite to mine. He is a come-forward fighter who also knows how to box with good counter-punching. There is going to be a lot of things to deal with on the night but I will deal with them all comfortably and go on from there. The most important thing is to make weight in seven weeks and we can go from there.

The O2 has been great to me and I have boxed there more than any other venue. I won the Lonsdale belt there, won and defended my World title and now I am back there on October 26. I’ve got a tough opponent in front of me, Ricky Burns is a former three-weight World Champion and to be a World Champion and defend it once you have got to be a great fighter, to do it twice you have got to be brilliant and to do it at three different weights, you’re elite. I have got the upmost respect for Ricky Burns and we shared the ring back in 2014. He got me in for sparring in preparation for his fight with Crawford and from what I can remember it was great sparring, up and down. After each session, everyone in the gym would give us a standing ovation so if the sparring is anything to go by then we are in for a treat.

A few years back when I was British Champion making Featherweight was a real struggle and I remember you asking me Eddie, “how do you make the weight?”. The sacrifices and some of the stuff I had to do to make the weight you wouldn’t believe. Losing the World title was very upsetting but it was a weight lifted off my shoulders, I can fight at a more comfortable weight and I’m in the gym and feeling good. 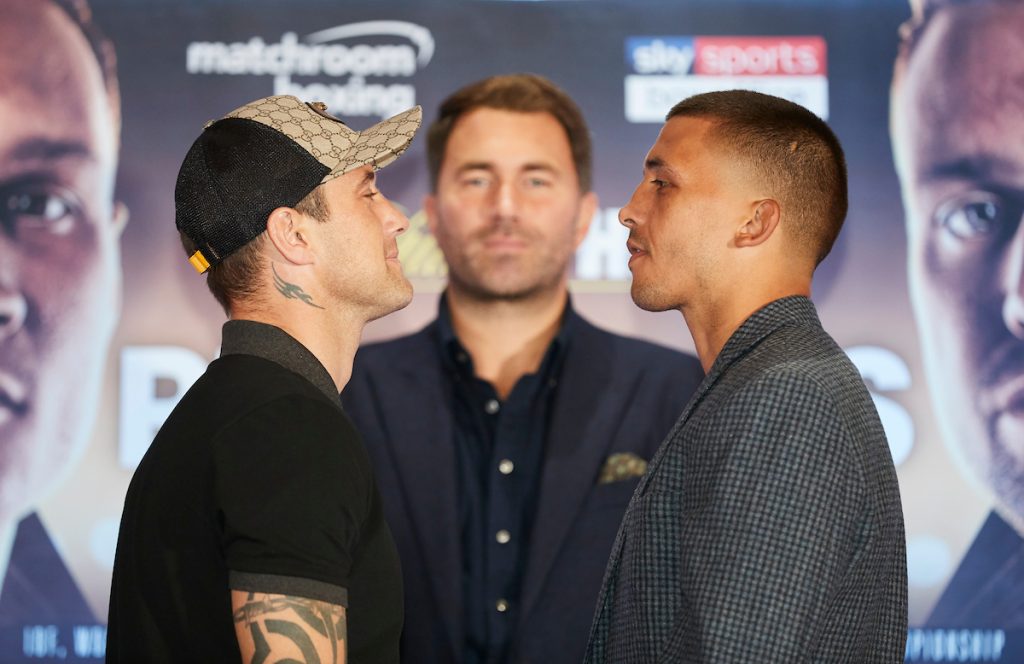 I’ve finally got a fight over the line, it has been a frustrating year for myself. We have had a couple of fights being spoke about but they fell through. My last fight was in November last year but we have pulled it out the bag with this one. I know that I am in for a tough fight, as Lee said, we sparred before and he came up to help me when I was boxing Crawford and I can always remember when we were sparring I said to him he “you’re so big for a Featherweight, how do you do it?”. It was competitive sparring and like I said, on the night the best man will win. I just feel like I am going out there to do a job, training has been going well so far and I can’t wait for October 26.

We know what Parker brings to the table, he is well established. More importantly he holds that all important win over Andy Ruiz Jr who is arguably the number one Heavyweight on the planet after the crazy stoppage victory he got over AJ in New York which I was ringside for. For me, Derek getting that win against Parker means more than just a win. It really catapults him up there to the top players in the division and he has shown time and time again that he can come again. Last time out against Artur Szpilka his training camp hadn’t gone well, sparring was a struggle but he managed to get it together in the last two sparring sessions. Fortunately the universe works in strange ways and I was in the Hayemaker gym round the corner today watching Derek Sparring for the first time since that fight in his first real war sparring and he is back. He is in a better place now seven weeks out than he was on fight night last time out. The fact he hasn’t had long out the gym and is back working hard means he is a great spot and he is going to build on what we brought to Artur Szpilka at the O2, an arena where he has a great history. Parker is in shape and is going to come to win this fight and I think it is going to be an absolute barnstormer.

Dave Coldwell will no longer be training Derek Chisora because of a logistical issue in the sense that Dave couldn’t come down to London and Derek wasn’t able to get up to Dave. We will make an announcement in the coming weeks who will be in the corner but if sparring is anything to go by you are in for an absolute treat and Joseph Parker would never have had the heat that is going to be brought to him on October 26.

I’m bringing war, I’m not playing. This is my show. Boxing is thriving because of the Heavyweights. Mike Tyson said it when AJ knocked out Klitschko, the money is back in the division. I want more money if I’m not headlining the show!

I’m really looking forward to fighting for the first time in London, headlining at The O2 and I am so excited for it, I can’t wait.

I am fully confident going in to this fight. I am bigger than him, stronger, quicker and punch just as hard – I can beat him in every department. If he comes and tries to walk me down then I believe that he will walk onto a shot and I will get him out of there, if not I can outbox him for the full 12 rounds. I am fully confident I can win this fight either way It goes so I am happy and excited to be here. I have always wanted to box on a big show in London and I’ve been to watch shows here in the past. I am so excited to be headlining and to be a part of a great night.

I believe myself and Regis are one and two in the division – we’re the two guys to beat. We will prove this on October 26 and I feel like this is my time to shine. I can’t see him beating me at all and I am super confident. However it goes you will see a Josh Taylor win, I can’t see anything other than a win for myself. 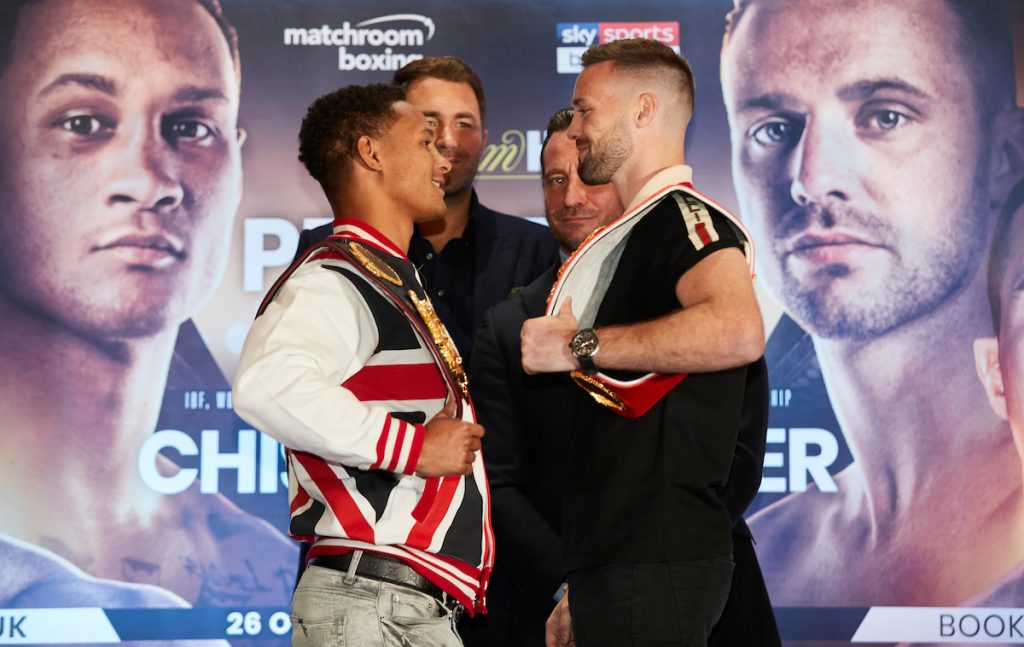 I am so glad to be here and I am so excited for October 26. It has been a dream for me for a long time to come and fight in London, the fans over here are some of the best in the world. For me, there is no animosity towards anybody and most fighters don’t get this chance in a lifetime. You have got four things on the line, my title, his title, the Ali Trophy and the Ring Magazine belt. I had a late start but a lot of fighters have been fighting for 20 or 30 years and never have got this opportunity. For me to be here is the opportunity of a life-time and this is about personal legacy right now.

To be getting this chance in London, at The O2 – I can’t wait! This is number one and number two, two undefeated fighters in their prime, both champions – sometimes you have two champions but they’re not number one and number two but this time it’s two prime undefeated guys. This is a huge show and I am so excited to be a part of it. Everybody that I have fought was supposed to be an even, 50-50 fight but I dominated. He is taller and longer than me but the tale of the tape doesn’t matter to me. You can’t determine my hook by the tale of the tape or my boxing IQ. I don’t just want to repeat what he said but I really cannot see how he can beat me. I am not being cocky or arrogant but I just can’t see it. He’s been hurt in his last fight and he was dropped too. The past is the past and this is going to be me and him and I think he will bring his A game like I will – this is going to be one hell of a fight.