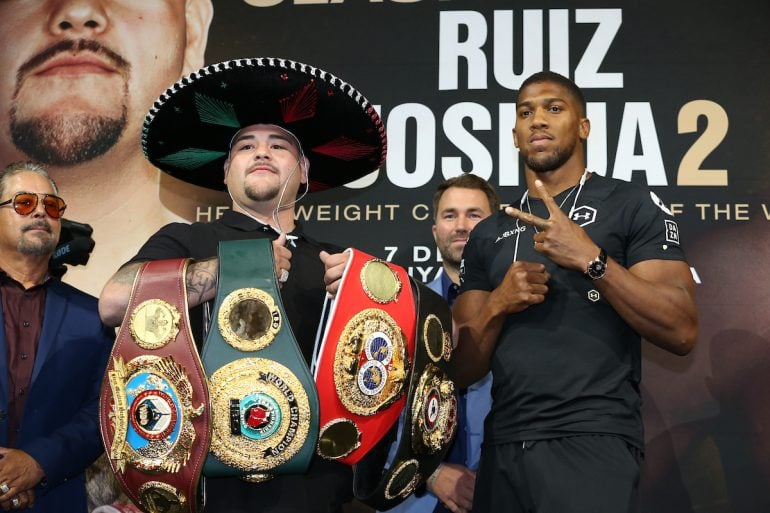 In the anticipation of Joshua-Ruiz II, I wanna touch once more the topic of their first fight. Like many, I experienced a great shock at the night. It was so unbelievable that Joshua – who was, at the time to me, the most accomplished of the Big Three (Wilder is power, Fury is  skills, Joshua got both) – could lose to someone of Andy Ruiz’s unathletic appearance. Some thought he simply had the baddest night of his career. But what I’m wondering just now is: Was his boxing skills or the image of a destroyer with a stunning KO power simply overestimated?

I mean on one hand the wins over Klitschko, Povetkin, Dillian Whyte, Joseph Parker are without doubt making his resume the best of any active heavyweight, but on closer inspection – it is not. The thing is that Klitschko and Povetkin were already old at the time he beat them and definitely past their best days and even that they still gave him some scary fits. Dillian Whyte was such an untested prospect as he was at the time, both having no one of note in their records, and who rocked him too. And he went the distance with Joseph Parker, who was never considered a true elite and despite the huge difference in size and power, was never able to hurt him. To add to this a controversial stoppage over Carlos Takam…  And who knows if he were to meet Klitschko and Povetkin at their bests or face Dillian Whyte now, more mature and battle-tested than back then, what the outcome would be?

So, there’s a question – was he somewhat OVERRATED or just Andy Ruiz Jr was that good, whose handspeed and skills were too much for Joshua to handle?

Some Mythical Matchups of the biggest shockers in heavyweight history:

Thanks for sharing your thoughts and questions on what is still the frontrunner for Upset of the Year, as well as the matchup that remains the most compelling in the sport, Jose.

Hasim Rahman vs Buster Douglas, Lamon Brewster, Andy Ruiz – Douglas by close decision, Rahman by decision (if he boxes a disciplined gameplan, which he could, but you never knew what version of Rock would show up – if he tried to bang with Lamon he’d get whacked out IMO) and Rahman, again, by decision over Ruiz (but like the Brewster machup, he’d have to respect Andy’s power, chin and guts).

Buster Douglas vs. Oliver McCall – Douglas by decision (this is another fight that actually took place – 30 years ago) 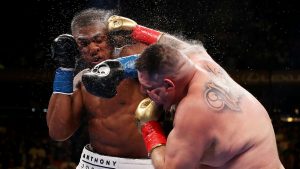 It was so unbelievable that Joshua – who was, at the time to me, the most accomplished of the Big Three (Wilder is power, Fury is skills, Joshua got both) – could lose to someone of Andy Ruiz’s unathletic appearance. Yeah, but you can’t judge the magazine by its cover with Ruiz, there’s quality content in those pages. AJ was indeed the most accomplished of the Big Three, and he does possess a blend of skill and power, but Ruiz is not slouch with that combination himself. And Ruiz has got more than good technique and power – the happy fat man has SPEED, and there’s nothing more dangerous in the prize ring than a puncher with deceptively quick hands. As good as Joshua is, Ruiz simply does a few things better – primarily his combination punching and ability to take a good punch. That goes a long way in a shootout.

Some thought he simply had the baddest night of his career. They both did. Joshua had a bad night; Ruiz had a BADASS night.

But what I’m wondering just now is: Was his boxing skills or the image of a destroyer with a stunning KO power simply overestimated? I don’t think so. To me, Joshua was as good as advertised. Ruiz just turned out to be much better than advertised. And Joshua wasn’t ready for that.

I mean on one hand the wins over Klitschko, Povetkin, Dillian Whyte, Joseph Parker are without doubt making his resume the best of any active heavyweight, but on closer inspection – it is not. That’s boxing for ya; this has got to be one of the only pro sports where a standout competitor’s greatest victories/accomplishments can be used as examples of why he or she really isn’t that good.

The thing is that Klitschko and Povetkin were already old at the time he beat them and definitely past their best days and they still gave him some scary fits. Yeah, that’s true. Neither man was a spring chicken when he challenged Joshua, but heavyweights mature a lot slower than fighter from lighter weight-classes and those two were not your average big men. Both are Olympic champions. Klitschko is a future first-ballot hall of famer. Povetkin had only lost to Klischko and had been on an eight-bout win streak going into the Joshua showdown.

Dillian Whyte was such an untested prospect at the time, both having no one of note in their records, and who rocked him too. Somebody is likely to get rocked and somebody’s ‘O’ has got to go when two unbeaten-and-untested heavyweight boxer-punchers are matched up. Whyte got the s__t-end of that stick, but the loss probably helped in making him a better fighter. Joshua’s loss to Ruiz could make him a better fighter.

And he went the distance with Joseph Parker, who was never considered a true elite and despite the huge difference in size and power, was never able to hurt him. Hey, Ruiz wasn’t able to Parker either (and the New Zealander moved a lot on AJ, just as he did vs. the Mexican-American contender).

And who knows if he were to meet Klitschko and Povetkin at their bests or face Dillian Whyte now, more mature and battle-tested than back then, what the outcome would be? He could conceivably go 0-3 against that terrific trio in mythical matchups, but so what?

PROGRAIS-TAYLOR LANDS IN THE UK

Hey Doug hope all is well.

Seeing a lot of negativity about the Prograis v Taylor being PPV in the UK but I really think this card is a treat. Five former or current champions all on one card. What’s your thoughts on the PPV (roughly 25$)?

Parker points if he fights smart

Always good to hear from Scottish fans, Hammi (yeah, I Googled your hometown). 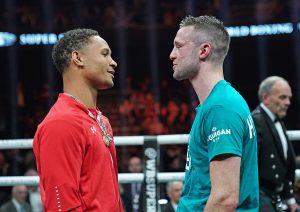 There will be plenty of time for deep dives on the World Boxing Super Series 140-pound tournament final between top seeds Regis Prograis and Josh Taylor on October 26, but for now, I’ll just say that it’s neck-and-neck with Ruiz-Joshua II as the scheduled fall/winter matchup that I want to see the most.

Oh, and I’ll also mention that the card is not PPV in the U.S. It’s on DAZN.

Oh, and one last thing: The vacant Ring Magazine junior welterweight championship is on the line in the main event.

I’m going Taylor late round KO. That’s a bold call, man. I’m super high on Taylor, but I honestly can’t pick a favorite in this matchup. Your lad has advantages in height and reach and I think he’s got the edge in boxing fundamentals and footwork, but Prograis appears to have the edge in power as well as an aggressive but unique style that’s hard to shine against. I think they matchup well and are pretty much equals in the ring (especially in terms of ring IQ) until one of them proves otherwise next month. I’m gonna have to do my homework on this matchup before I make a solid pick and prediction.

Parker points if he fights smart. Agreed. Dereck Chisora is a tough out for any heavyweight, but I think Joseph’s rock-solid chin and ring savvy/generalship (which should include a lot of lateral movement) will see him through to a hard-earned decision victory.

Burns to brutalize Selby in great style. I’m a proud fan of the Rickster but that outcome would surprise me. I know Burns has a much better resume than Selby, who made his name at 126 pounds, but I think the Welshman is more comfortable fighting at 135 and he’s likely a lot fresher than the veteran Scotsman. I hope I’m wrong, but I can see Selby giving Burns fits.

Okolie to cure insomnia. Aw, come on, Hammi. I know Okolie has stunk out the joint a couple times in previous bouts, but that doesn’t mean his matchup with Yves Ngabu is going to suck. (This matches The Ring’s Nos. 9- and 10-rated crusierweights, by the way.) If you’re not a believer in Okolie’s ability then have faith in Ngabu’s ability to make it an interesting fight. The Belgian boxer-puncher appears to be a decent combo-and-counterpuncher, and his body attack looks pretty good. I favor Okolie but I think Ngabu can make it interesting.

My best to you and yours. Family is everything.

I’m wondering when boxing commissions started allowing fighters with bushy shock absorbers into the ring. I can remember not long ago when bearded fighters were required to shave before they could fight. Now it seems to me that almost every weekend I see someone with a large beard in the ring. This afternoon it was Ryan Ford from England, who was finally knocked out with a body shot.

Don’t get me wrong. I have nothing against beards. I own a small one myself. But don’t they give a fighter an advantage? Best. – Leslie Gerber, Woodstock, NY

I think it’s a matter of opinion, Leslie. Some trainers think a big, bushy beard will help cushion blows to the chin, while others object to them being worn in the ring because they fear that particularly coarse or wiry facial hair can scrape the face of their fighter during physical infighting. 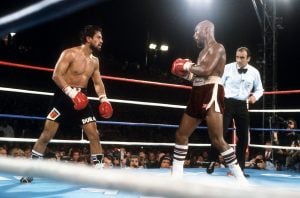 Duran (left) challenged Hagler (right) for the middleweight championship in 1983. Photo / THE RING

Most trainers these days don’t seem to care. It seems that the more popular and fashionable beards become in everyday society, the more acceptable they are in the prize ring. It used to be that only a few notable boxers had beards (late-career Roberto Duran had his famous facial hair and Marvin Hagler had his Fu Manchu ‘stache and goatee – and both beards added to the menacing images the legendary champs brought into the ring). These days you see journeymen, gatekeepers, prospects and fringe contenders with big ole bushy beards, and most fans and boxing insiders don’t think twice about ‘em.

Freddie Roach is old school, so he often demands that the opponents of his fighters who have beards (or even long goatees, as Antonio Margarito had prior to the Manny Pacquiao fight) shave them off or at least cut them down prior to the fight. He did this with Adrien Broner when Manny Pacquiao fought the wayward Ohioan in January. Broner’s trainer Kevin Cunningham agreed that the beard had gotten fairly long. The Nevada commission rules allow for them to determine if a fighter’s hair or beard is so long that it becomes a safety concern (to either or both combatants), and they can insist on a fighter trimming their hair down to a reasonably length. Broner shaved the beard.

I noticed Ryan Ford’s beard during the Josh Buatsi fight. I don’t think it had anything to do with his durability, but I did mention to my daughter that it made his bald head resemble and ice cream cone.

There are two fighters I’ve noticed recently whose beards seem to get longer and bushier with every fight – WBC titleholder Gary Russell Jr. and former 130-pound title challenger Jono Carroll.