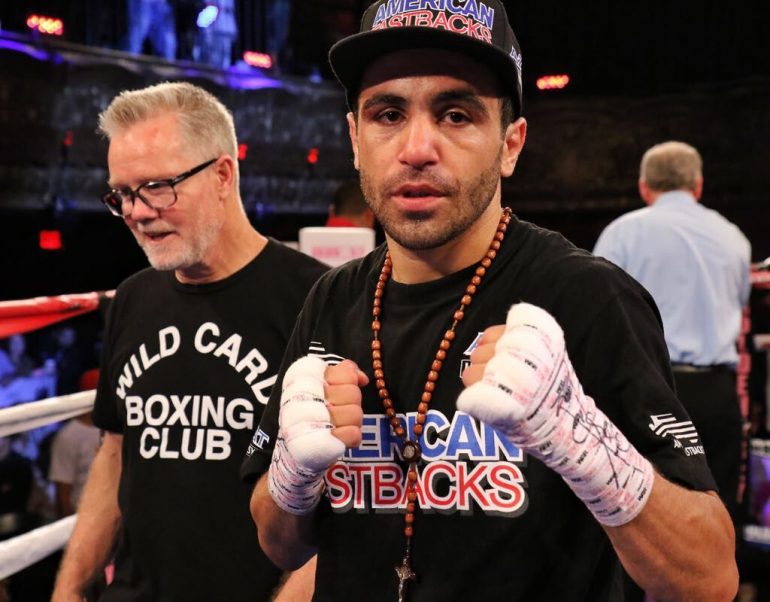 Azat Hovhannisyan is a firm believer in second chances. He’ll get one after a victory over Franklin Manzanilla earned him a second shot at a world title belt.

Hovhannisyan battered the contender from Colombia, forcing him to take a knee before he was counted out in round four on Thursday night at the Belasco Theatre in Los Angeles. With the win, Hovhannisyan improves to 18-3 (15 knockouts) and earns a shot at the WBA junior featherweight title, which is currently held by Danny Roman.

The fight was a match-up between former world title challengers, both of whom lost to WBC titleholder Rey Vargas.

Both fighters had their moments in a methodical opening round, but Hovhannisyan began walking down Manzanilla, forcing him to fight off his back foot. With each passing minute, Hovhannisyan let his hands go, connecting several combinations to the head and body.

Hovhannisyan rained several punches at Manzanilla in the fourth, backing him up against the ropes. Hovhannisyan’s unanswered punches towards the end of the round took their toll, forcing Manzanilla to take a knee to avoid taking further punishment. He remained on one knee as referee Edward Collantes counted him out at the 2:58 mark.

“This was a very easy fight at first,” said Hovhannisyan, who is trained by Freddie Roach. “I could have made it a 12-round fight, and he would not have touched me. But (he) wanted to make it a tough fight. I wanted to make it an exciting fight. I didn’t even feel his punches.”

Azat Hovhannisya wasted no punches and deafted Franklin Manzanilla by KO. ? What an unbelievable performance by Azat ? pic.twitter.com/xNryHAhQ5V

Earlier this week, Roman had to pull out of his IBF and WBA world title defense against mandatory challenger Murodjon Akhmadaliev, scheduled for Sept. 13, due to a shoulder injury suffered during training. Hovhannisyan would like a shot at fighting Roman, but has other options if Roman’s return to the ring takes longer than expected.

“If Rey Vargas doesn’t want a rematch and Danny Roman is injured, then I want (WBO titleholder) Emanuel Navarrete.”

“We also knew he was a tough warrior,” said Manzanilla after the fight. “I tried to box. It was the wrong game plan, but either way, I’m going to rest and see what opportunities are out there for me. I’ll be back.”

With the victory, Valentin improves to 9-0, 8 KOs.

Valentin, who had never been past the third round, figured to receive a decent test from Bassa, who had faced the likes of Ronny Rios, Joet Gonzalez, Jonathan Oquendo and Lamont Roach.

The bigger Valentin outboxed and landed the more-telling punches during the first two rounds of the fight. By the midway point of the fight, Bassa used his experience to land lead and counter left hands to the head of Valentin.

Bassa connected in spots, but Valentin was busier and effective during the last three rounds of the fight.

All three judges scored the bout 79-73 in favor of Valentin.

In the opening bout of the Golden Boy Facebook Watch stream, James Wilkins (8-1, 6 KOs) dropped journeyman Luis May once en route to a unanimous decision victory.

Wilkins utilized his size and athleticism to effectively outbox May throughout most of the fight. May was game, but was able to hold off the more-assertive fighter from Staten Island, New York.

The 23-year-old Wilkins dropped May with about 30 seconds left in round three. May beat the count and fought on the rest of the way, utilizing his experience to land an occasional right hand or left hook to Wilkins’ head.

May, who is a restaurant owner in his hometown of Cancun, Mexico, drops to 21-16-1 (8 KOs). He has lost seven of his last eight bouts.