Eddie Hearn on Saudi deal controversy: ‘If I don’t do it, someone else will’ 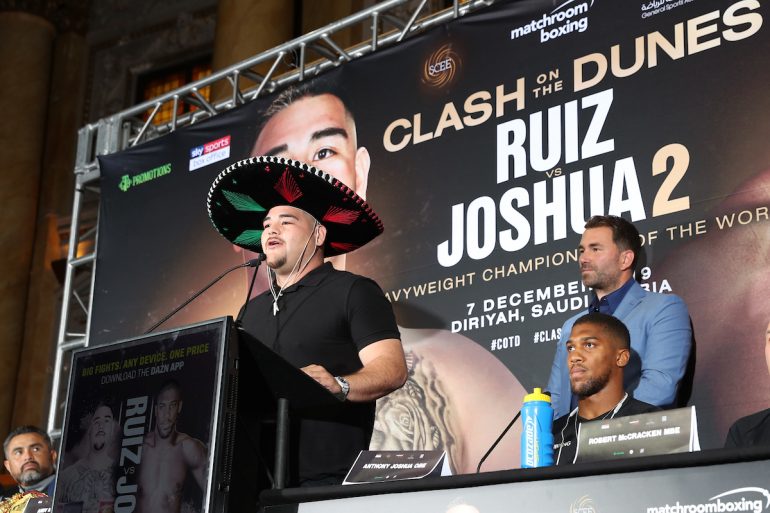 NEW YORK — Promoter Eddie Hearn brushed off criticism over his decision to bring the Andy Ruiz-Anthony Joshua rematch to Saudi Arabia, saying that “every country has problems” and that he’s only getting the best deal he can for the fighters.

“It’s not about backing a regime, we have a job to provide the best opportunities for our fighters,” said the Matchroom Boxing managing director Hearn on Thursday afternoon when asked whether bringing a big show like that brought legitimacy to a regime that has drawn widespread backlash for its human rights record.

“And if that means I have to get thrown under a bus…,” Hearn continued. “Every promoter in world boxing has tried to get a super fight in Saudi Arabia. Floyd Mayweather did everything he could to get the (Manny) Pacquiao rematch in Saudi Arabia. Unfortunately for me, I’m the guy that got it, so I’ve got to live with the little bit of criticism that comes with it.”

.@EddieHearn explains his reasoning for why he’s willing to do business with Saudi Arabia considering their poor human rights record #RuizJoshua2 pic.twitter.com/6oXyphGgpX

The fight, a rematch of Ruiz’s shocking knockout win on June 1 at Madison Square Garden, is set for December 7 in Diriyah, Saudi Arabia at a 16,000 capacity venue that is still under construction. The main event will air on DAZN at midnight local time so a 4 p.m. Eastern Time airing.

Hearn continued that he was told that other promoters have tried to follow up with Saudi promising to deliver fights.

“Let’s not kid ourselves, don’t you think any promoter wants to go wherever the most money is for their fighters, and that’s what we’re doing. But what I will say is, I’ve experienced it, I’ve seen it and every occasion has been absolutely first class. The logistics are on a level I’ve never seen before.”

The two fighters arrived in town for the second leg of the three-city press tour, which began the day before in Saudi Arabia and will conclude on Friday. Among those in attendance was Khalid bin Salman, the Saudi prince who has been accused of convincing Washington Post journalist Jamal Khashoggi it was safe to enter the Saudi consulate in Istanbul, Turkey just before he was killed there last October.

Saudi officials claimed it was a “rogue operation”, but the CIA concluded that Saudi Crown Prince Mohammed bin Salman, the brother of Khalid bin Salman, ordered the killing.

In addition, Saudi Arabia has drawn criticism for its record on LGBT rights and women’s rights.

Hearn says he was “100 percent” confident that the crowd will be integrated, with women being allowed to watch the fight alongside men.

“It’s pretty frustrating when you hear like ‘women aren’t allowed to the event’,” said Hearn. “I went to the World Boxing Super Series (final between George Groves and Callum Smith in September 2018), there’s loads of women and now things are changing more so. I was on the plane yesterday for the press conference last night, full of women.”

Hearn says that Saudi Arabia was a second choice for the rematch after the Ruiz camp objected to holding the fight in Cardiff, Wales, which is in the United Kingdom where Joshua, a native of Watford, England, is from. Asked how much more money Saudi Arabia was offering to bring the fight there, Hearn responded, “a lot.”

“No country in boxing right now can possibly compete with the money that is available in the Middle East. We either embrace it, or we turn our nose up at it and let someone else do it,” said Hearn.

Ruiz-Joshua II is far from the first controversial location for a fight, as illustrated in Michael Woods’ story last week on the subject.

Hearn says that the local commission will handle the fight, but that an arrangement will be made to keep all parties happy with representation.

Testing is being handled by the Voluntary Anti-Doping Agency (VADA), which is already underway, says Hearn.

Joshua (22-1, 21 knockouts) said he felt comfortable fighting in the Middle East because he travels there frequently.

Ruiz (33-1, 22 KOs) initially felt “iffy” about fighting in Saudi Arabia, but changed his tune once he touched down and was impressed by the security detail provided to him.

“As soon as we got there, it’s a lot different, it’s beautiful out there, beautiful people,” said Ruiz.