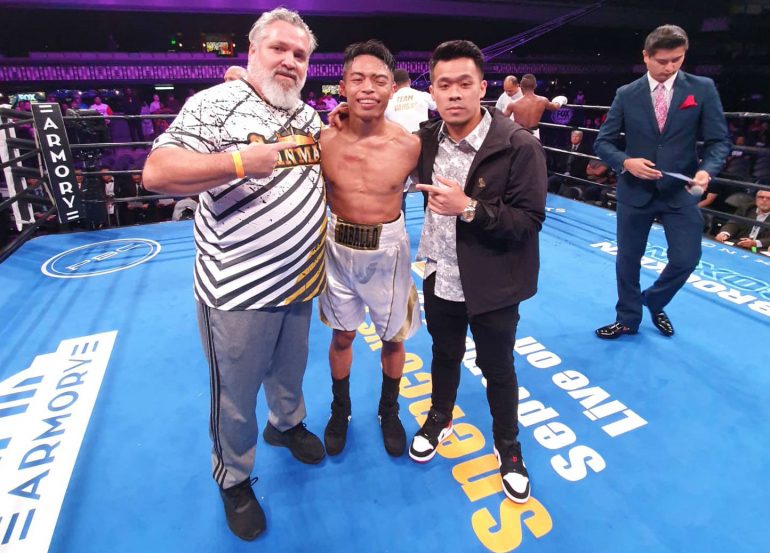 Reymart Gaballo needed just three rounds to get through his debut on the Premier Boxing Champions roster, scoring a knockdown in the second and another two in the third to finish off Yeison Vargas.

It was Gaballo’s third fight in the U.S. and took place on the undercard of the Erislandy Lara-Ramon Alvarez card at the Minneapolis Armory in Minnesota.

Gaballo (22-0, 19 knockouts) of Polomolok, Philippines found his target early against Vargas (17-2, 12 KOs), landing a left hook to the body late in the second to score the first knockdown. The bell rang right after, giving Vargas a much needed breather. Gaballo came out for the third looking to continue the body work but drew warnings for low blows from the referee.

Reymart Gaballo finishes off Yeison Vargas with two knockdowns in the third round to win his PBC debut in Minnesota. The Filipino bantamweight is now 22-0 (19KOs) (Video from Sanman livestream) pic.twitter.com/KcaEGpEexP

That was enough to convince Gaballo to direct his punches upstairs instead, and he scored two knockdowns in quick succession from hard right hands to end the bout at the 2:04 mark.

“I was relaxed because I know this is my first step in my career with PBC,” said the 23 year old Gaballo, who is trained by Osmiri “Moro” Fernandez.

“I’m ready with anyone at 118 pounds. Anyone they give I’ll fight.”

Jim Claude Manangquil, whose Sanman Promotions co-promotes Gaballo along with PBC and MP Promotions, credited matchmaker Sean Gibbons with maneuvering them to this spot, and says they’ll plan to get Gaballo back in the ring later this year or early in 2020.

“Of course the WBA bantamweight title is the target,” said Manangquil, referring to the two belts that will be stake in the World Boxing Super Series final between “regular” titleholder Naoya Inoue and the recognized champion Nonito Donaire on November 7.

Asked for other possible opponents while that title situation plays out, Manangquil says Guillermo Rigondeaux – whom Gaballo sparred with in Miami – or Liborio Solis would be preferred matchups.