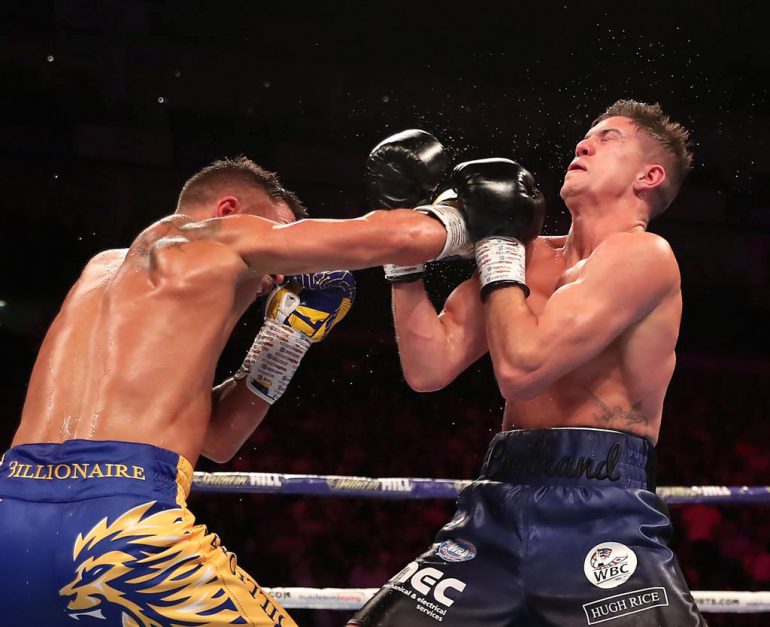 Loma on the attack against Cool Hand Luke.
31
Aug
by Tom Gray

LONDON – Vasiliy “Hi-Tech” Lomachenko was made to work, and he did just that.

The pound-for-pound No. 1 from Ukraine was energetic and efficient – if not electrifying – in a 12-round unanimous decision win over fellow Olympic champion Luke Campbell at the O2 Arena on Saturday. With the victory, Lomachenko added the vacant WBC title to his growing list of lightweight honors. Official scores were 119-109, 118-109 and 118-109.

Lomachenko, The Ring champion at 135 pounds, dropped a tiring Campbell in the 11th with a furious burst of shots to the body, but the gallant Englishman reached the final bell after putting forth a spirited effort in defeat. Campbell’s stock can only rise after this performance, but there was only one winner.

“Of course I’m happy and thank you to everyone who came to support us,” said Lomachenko (14-1, 10 knockouts) in his post-fight interview. “This is my (WBC) title, and I want to fight and unify the division.”

It was a cautious opening, but Campbell got the best of the first round with a brace of sharp left hands, one of which drew a nod of appreciation from the pound-for-pound king. The Englishman continued to have success from the outside in the early sessions, and his owns feints and footwork were giving Lomachenko a test.

The inevitable Matrix shift occurred in Round 4. Lomachenko dipped effortlessly inside Campbell’s right jab and scored with some brilliant singles and doubles to head and body. Campbell maintained his composure, but he was getting a preview of what the great Lomachenko could do.

Round 11 – Lomachenko is looking to seal victory in style and a searing punch to the ribs troubles Campbell.

DOWN! Campbell is floored, he gets back up and holds on desperately. #LomaCampbell pic.twitter.com/7XTLCDmNtb

The champion took that success into the fifth and landed the two best punches of the fight; a pair of brutal straight left hands to the chin. When the second of those needle-sharp shots landed, Lomachenko followed up to the body and hurt Campbell badly. Almost down at the very end of the round, Campbell returned to his corner gasping for air.

It was now becoming the “Loma Show,” although Campbell still gallantly returned fire. His best moment came in the seventh when he jolted the visitor with two sharp left hand counters that sent the home support into a frenzy. However, that success only served to infuriate Lomachenko, who rallied back with some superb work of his own. That pattern continued for the remainder of this fight. Campbell would have a modicum of success but would be paid back with interest. 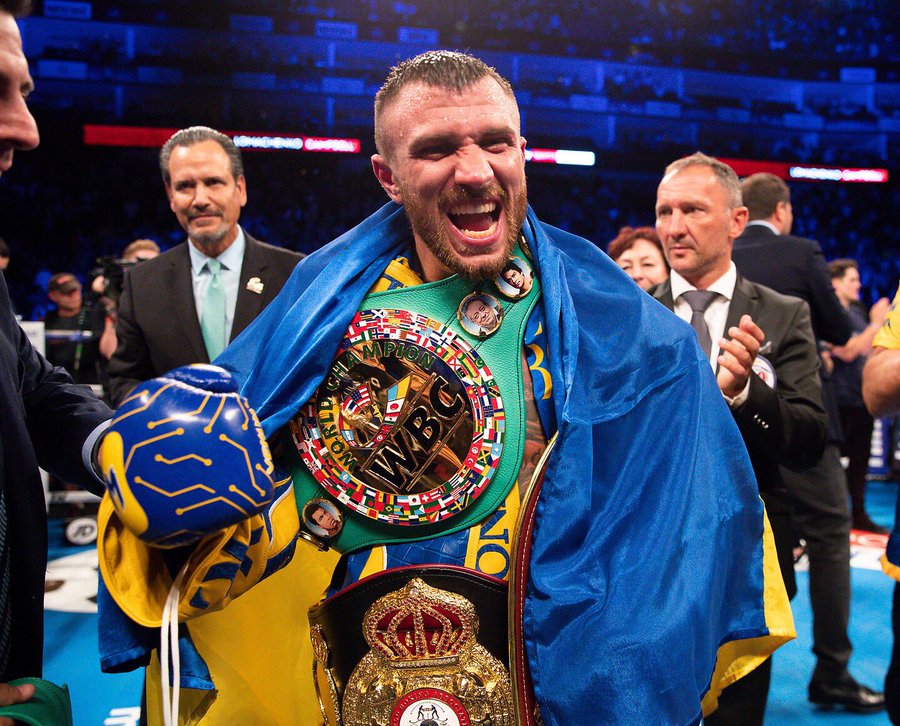 Now armed with WBA, WBC and WBO titles, Lomachenko needs only the IBF belt, currently held by Richard Commey, to acquire undisputed status in the lightweight division. If successful, he’ll be the first man to do so since the great Pernell Whitaker almost 30 years ago. The hard-hitting Commey faces a significant test in the form of mandatory challenger Teofimo Lopez on Dec. 14 at Madison Square Garden. Regardless of who wins that bout, Lomachenko would open as a significant favorite against either of them.

The 31-year-old Campbell (20-3, 16 KOs) can take solace from the fact that there was absolutely nothing he could have done tonight. The Englishman is a terrific boxer, who has been dreadfully unlucky in both of his attempts at world titles. Just days prior to him challenging Jorge Linares in September 2017, Campbell’s father passed away after a long and brave battle with cancer, and he still came agonizingly close to winning on points. Tonight, he just came up against an incredible talent, who looks on course to becoming the finest fighter of a generation. Campbell is sure to come again.