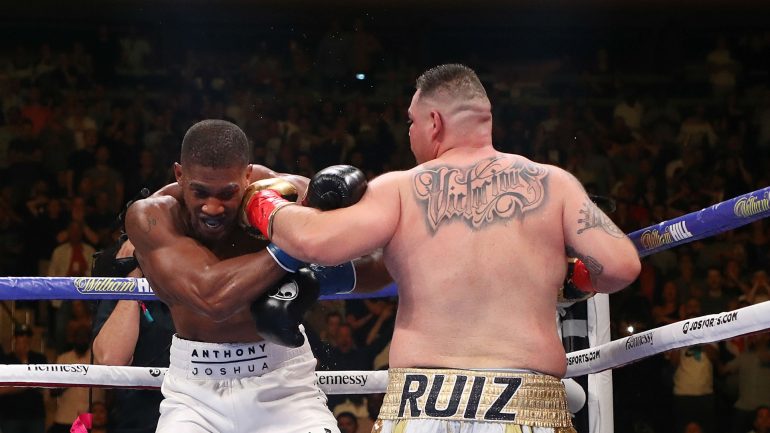 It seems likely that promoter Eddie Hearn will be answering questions about placing the Anthony Joshua vs. Andy Ruiz Jr. sequel in Saudi Arabia from now until fight night.

The British promoter, who is the main packager for DAZN spoke on The Luke Thomas show, and was asked if it is ethical to hold that heavyweight clash in that Middle East station.

“I think so, and I think we’re following in the footsteps of all those huge organzations that are staging major sporting events there,” Hearn told the host of the Sirius show. WWE, PGA, WBSS, horse racing, and F1 doing a Formula E event…He noted that 70,000 convened to watch David Guetta.

“This fight will go down in history, this will be up there with Thrilla in Manila, the Rumble in the Jungle, where major fights were held in sometimes controversial places, where huge amounts of money was generated for the fighters in an event that will go down in history. So, yep, it’s gonna come with its criticism,” he allowed…but Saudi Arabia is a “sports and entertainment destination,” for athletic contests and entertainment.

He continued; Hearn said he’s happy that this place is being opened up as a new source of eyeballs, which can help grow boxing. Fourteen million persons living right there, “70 percent of which are under the age of 24,” he shared. He is salivating, and believes that he can snag a nice percentage of them into becoming AJ fans, and boxing fans.

Hearn makes a few solid points. He doesn’t delve deeper, and remind, or tell this era’s fight fans that bringing such a spectacle to such a region is an honored and effective tradition. Mobutu Sese Seko tried it with the Rumble in the Jungle, in a bid to normalize, to show the world he and his nation weren’t so different than ours. Ferdinand Marcos in Manila tried to do the same. Of course, there are salient differences in play. For one, when Zaire and Manila welcomed Ali, they were welcoming Ali. He was the show, his persona would do more to lift the nations up, via osmosis, than a Joshua or a Ruiz could. But Mohammad bin Salman, in the same vein, would prefer reporters mention Saudi Arabia in the context of sporting events rather than more “controversial,” or darker, contexts.

Hearn has also said, in so many words, find me the super power nation free from mud strewn by moralists. Again, he’s not wrong; Americans do a fine job at wagging fingers, and not so much paying heed to the ones aiming right back at them, as they criticize foreigners for misdeeds and steps.

Now, comparisons to mega bouts from past decades don’t align perfectly. In Zaire, Ali was happy, he said publicly, to be showing off her magnetic majesty “in a country operated by black people. I wish all black people could see this. In America, we’ve been led to believe that we can’t do without the white man, and all we know about Africa is jungles…It don’t seem possible, but 28 million people run this country, and not one white man is involved…We in America are the savages,” The Greatest said in the lead to his scrap with Foreman.

Mobutu must have been grinning and chuckling maniacally, what bang for his buck. (Or his $10 million or so bucks expended for the Oct. 30, 1974 PR payoff.) Also, consider that in America, citizens were either avoiding all together as best they could, or wrestling with the unwanted reckoning that their own leadership was nothing close to pure of heart and soul. On Aug. 8, 1974, Richard Nixon had told the nation that “I shall resign the Presidency at noon tomorrow.”

Four fights later for Ali, dictator Marcos sought to offer a softer side of himself to the critics. Marcos was a slick operator, a dirty trickster that could have taught Nixon some dodgy methodology, it could be argued. He put into motion false flag events to help himself put into place martial law in fall 1972. Marcos adopted a new constitution in 1973, and scrambled to hold power.

In 1974, in his state of the nation address, he said, “Two years ago we sought to transform our nation. We established what we called the New Society. We created hope out of despair. We gave every man, woman, and child in this country not only a new hope, not only a new promise, but also a new charge, a new responsibility, a new burden.” In his 1975 address, he’d laud his nation’s low unemployment rate, as compared to America’s. And so he hit on the idea of bringing the American icon, the most gleaming of all sporting icons, to his nation, to have some of that stardust rub off onto the Philippines.

OK, so Joshua is no Ali. But the fight, which will be the most talked about prize fight of the year in boxing 2019, is a great get for Salman bin Abdulaziz Al Saud, the King, and his son, Crown Prince Mohammad bin Salman, considered the de facto ruler of Saudi Arabia. He has led many reforms within the country, and sparked controversies, as well.  The thinking could well be this: better journos talk about the “controversy” surrounding the presence of a prizefight, than other higher-grade pockmarks.

The sports’ number one all time promotional titan, Bob Arum, has himself helped bring bouts to places where political unrest is of a spicier and arguably darker tone than our version. In 1979, Arum and Top Rank staged with a South African crew a heavyweight title fight. Big John Tate would battle Gerrie Coetzee of South Africa, on Oct. 20, 1979, and NBC would televise.

Critics swarmed some and Arum answered as to why he’d be OK with bringing that event to a place where apartheid reigned.

“It’s no coincidence that shortly after the announcement of the fight, and the integration of Loftus Versfeld Stadium (scene of the fight), the government began articulating a policy to repeal the ban against interracial marriage and the recognition of black labor unions,” the savvy deal-maker offered.

“Without the fight, these policies would have been harder for these people to accept. The fight created the climate for change. It’s no accident that the original thaw in the U.S.-China situation was brought about by sending in a Ping-Pong team,” he told the Washington Post.

Arum didn’t discuss the staging of the Hearn event in Saudi Arabia when he was invited on the Everlast Talkbox podcast a week ago. But Hearn could study up on Bob’s point-making in doing rebuttal to those thinking Saudi Arabia is not a proper place to hold such a prize-fight.

Hearn, in contrast, is not as yet being met with severe blowback, as Arum was in 1979 when Jesse Jackson led a campaign to have the bout scrapped and to force NBC from broadcasting it live.

Bottom lining it, Hearn is going to where the money pot is largest. He, like Arum, is businessman first. In ’79, Arum was attracted to a new well-spring for placing bouts, he’d be placing ten more title fights in Southern Africa. He’d signed Tate to a deal in 1977, and Big John had not seen a problem going to South Africa in June 1978 to defeat SA’s Kallie Knoetze, rated No. 1 by the WBA.

“I couldn’t care less whether Bophuthatswana is an independent nation or not,” Arum said, when pressed about where bouts would land, in sections more or less so integrated.  “If the fight is bad, people won’t tune in, and if it’s good, they will. (I prefer to) let the United Nations fool around and determine whether these people (in Bophuthatswana) are puppets or not. As long as I can do business and put on a fight, politics, frankly, bores me.”

Point to Bob for authenticity, then; after Tate downed Coetzee, he offered more candid Arum speak.  He relayed that he received 40% of the live gate—after the backing hotel group deducted expenses—plus all television money. NBC paid $400,000, and another $250,000 came in from foreign TV rights. Arum’s share of the concessions brought him an additional $250,000. “Can you believe this?” he said to SI. “From just the souvenir spinoffs I make a quarter of a million. That’s more than I make on a whole normal promotion in the States.”

Maybe we should leave it there, and have that sum up the story of bringing bouts to nations with leadership that invites harsh critique inside and outside their national borders…Sharp and opportunistic capitalists are adept at looking at a Zaire, Manila or Saudi Arabia and looking past human rights transgressions, and also recognizing that the world’s political leadership pockets are filled with no angels, and instead seeing pots of gold, there for the taking.

Profit making, to them, frankly, is less boring than politics.