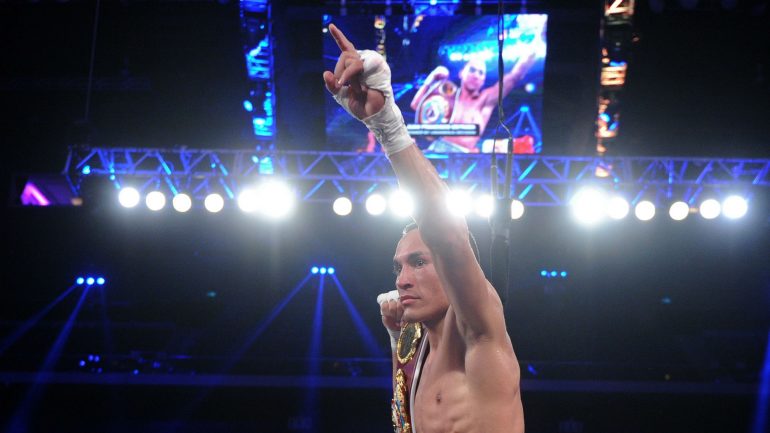 North Carolina native Beamon (16-2-1, 11 knockouts) fought with confidence, pushing forward and throwing punches in bunches. He backed Estrada into the ropes early in the second round but was caught with a counter left hook that dropped him to the canvas, sending the partisan crowd into a frenzy. A moment later another hook dropped Beamon to a knee. The challenger immediately rose to his feet, but had dug a massive hole for himself on the scorecards early.

Estrada looked calm and relaxed throughout, as if he saw everything Beamon wanted to do. The Mexican veteran threw fluid combinations upstairs and downstairs. Beamon’s feet were all over the place. After fighting nondescript opponents almost exclusively in the Carolinas and Mexico, the American was making a quantum leap in opposition tonight. He showed plenty of heart and landed some punches of his own, but appeared to be in over his head for the most part.

The pace settled in the middle rounds, with Estrada laying back and countering Beamon. He began taunting a bit in the fifth, laying his right elbow on the ropes to draw his inexperienced opponent in, then throwing combinations as he got close. Beamon returned the favor by escorting Estrada to his corner after the end of the sixth, having just landed some hard shots of his own toward the close of the round. Estrada hurt Beamon in the final minute of the seventh, landing several unanswered shots in a row, but the stubborn Carolinian kept swinging away and refused to back down.

What started as a completely one-sided showcase early on actually became interesting later on, as Beamon pressed the action with his nervous energy. His aggression would cost him though, as Estrada repeatedly countered him when he dove in. The accumulation of damage eventually a toll. Beamon’s left eye was swelling up and he was fatigued in the ninth round, meanwhile Estrada didn’t have a scratch on his face.

“El Gallo” caught Beamon with a hard body shot that pushed him into the ropes about halfway through the round, once again landing several unanswered punches, forcing the referee to stop the bout.

Could a unification bout against WBA title holder Khalid Yafai (26-0, 15 KOs) be next? The UK native also fights on DAZN and is promoted by Matchroom’s Eddie Hearn. That’s an easy fight to make and would unify titles in one of boxing’s most loaded divisions.