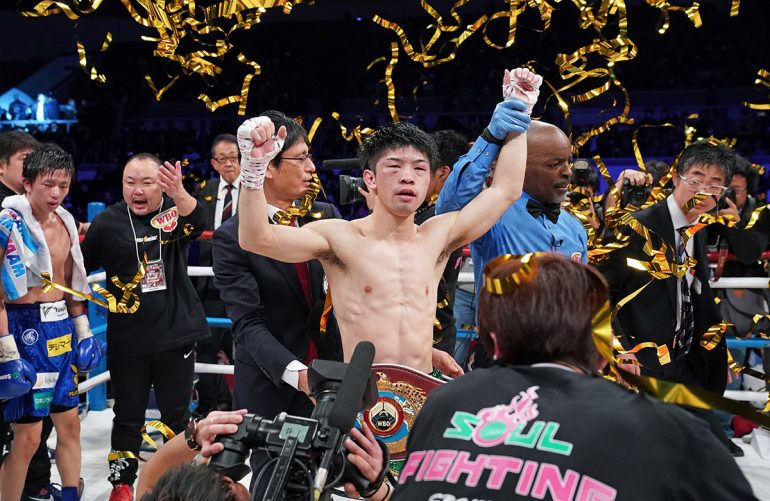 The Ring’s No. 1-rated flyweight Kosei Tanaka defends his WBO title against mandatory challenger Jonathan Gonzalez, of Puerto Rico, on Saturday at Takeda Teva Ocean Arena in Tanaka’s hometown Nagoya, Aichi. The fight will be streamed live in the U.S. and other world regions on RingTV.com in corporation with CBC TV, Tanaka’s longtime broadcast platform in Japan.

“It has always been my dream to fight in America,” Tanaka, who has held the WBO versions of the 105- and 108-pound world titles, told The Ring through Andre Ueda during his sparring camp in Philippines in June. “I am hoping that this live stream will put me one step closer to an American ring.”

Tanaka (13-0, 7 KOs) broke Japan’s national record of being the youngest three-division titleholder when he seized the WBO flyweight belt from Sho Kimura via majority decision last September at the age of 23. His first 112-pound title defense was a unanimous decision over Ryoichi Taguchi, a former Ring Magazine and WBA/IBF champion at junior flyweight (the 108-pound division), in March. Tanaka dared to fight in a hardnosed action style against those dangerous veteran rivals, but he can be an intelligent fighter with great quickness. He says he wants to show off his skills against Gonzalez.

“I have a variety of fighting styles, and I am especially proud of my speed. I would like everyone to witness it,” Tanaka said. “I am excited to face the WBO’s No. 1 contender, and I will fight in a way the audience can enjoy as much as I will.”

This will be Tanaka’s first time facing a southpaw in a championship bout, so he’s come prepared. Tanaka piled up sparring rounds with a team of lefties, including a couple of world-ranked Filipino fighters, but the best training partner for him was his older brother, Ryomei Tanaka, a prominent amateur southpaw who is targeting the 2020 Olympic Games.

The brothers opened their sparring session to the media at the beginning of this month. They only allowed two rounds of sparring to be witnessed, but the alacritous moves and lightning counters each displayed was enough to thrill the onlookers in the sweltering hot gym.

Gonzalez (22-2-1, 13 KOs), who beat fellow Olympian McWilliams Arroyo twice back in the amateur, has good sense of range and quick combinations. Tanaka might start with quick step in and out to control the time and not hesitate to throw vicious counters.

“I had good preparation. I don’t have problem with southpaw at all. I will be quicker than my opponent, and I will knock him out,” Tanaka boldly said during the fight-week media workout.

Once more, American boxing fans can watch it live on RingTV.com. The fight starts at 4:00 p.m. on August 24, local time, which is midnight (Friday) Pacific Standard Time and 3:00 a.m. Eastern Standard Time on Saturday. (The stream begins at 11 p.m. Friday PT/2:00 a.m. Saturday with the co-featured bout of the card, Kento Hatanaka vs. Jaysever Abcede, and both fights will be available on-demand for one week following the live stream.)

This stream is also available in other world territories except for Latin America (excluding Puerto Rico) and Japan. In Latin America on ESPN, and in Japan it broadcasts live on the CBC/TBS Network Channels.