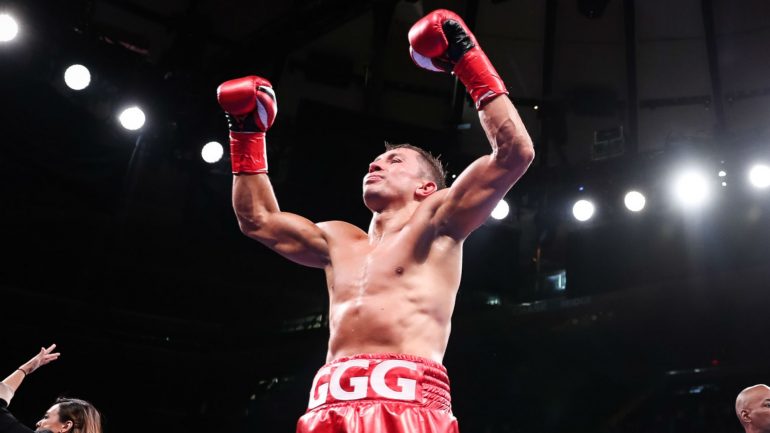 NEW YORK — This match wasn’t supposed to happen. But boxing is always offering the unexpected, isn’t it? It almost behooves you as a fan to expect the unexpected, as when Gennadiy Golovkin learned that he’d not be fighting Canelo Alvarez for a third time in a fall clash.

Nope, on Oct. 5, it is back to Madison Square Garden for the seventh time for GGG, the 37 year old Kazahk hitter. But he will face off with 33 year old Sergiy Derevyanchenko, a 13-1 (10 knockouts) pugilist from the Ukraine, instead of his Mexican rival.

The drums were beaten on Thursday at the famed and fabled so-called Mecca of Boxing, MSG, and the headliners were both courteous and looking dialed in as they spoke to assembled media.

The battle for the IBF middleweight crown last held by Canelo Alvarez will screen on DAZN’s platform. Eddie Hearn of Matchroom, the main promoter who funnels content to the OTT behemoth, presided over the presser, and sounded jazzed about this tango. He lauded the 39-1-1 (35 KOs) fighter who now makes California his home and said he was happy to be further allied with GGG. Last week, Hearn and GGG Promotions cemented a deal which will strengthen their partnership.

“He carries himself with so much class,” said Hearn of GGG who he said oozes integrity.

The boxer spoke all English in his turn at the mic. “Thank you Eddie,” he said, while wearing an eye popping red jacket, as he looked per usual humbled and less than fearsome. “Good afternoon everyone. I’m so excited…beautiful present, I don’t know.” He called the arena his “second home” and said he is now working with “the best people in boxing, I have the best opponent…This is not game, this is real fight.”

And then, “I’m a little bit scaried (scared),” he admitted, because he heard Derevyanchenko and his coach Andre Rozier talk up the Ukrainian’s chances. It might be Sergiy’s night Oct. 5…you must attend or watch to find out. “I promise guys, October 5th, we bring amazing show, don’t miss this show, see you at Madison Square Garden, guys.”

—Hearn called Keith Connolly the best manager in boxing. That is probably so; he has made Danny Jacobs absurd money the last three years.

—Sal Federico from MSG said he is looking forward to this one and also the Sept. 13 Theater program. He thinks Heather Hardy will steal the show that night.

—Connolly said that two days ago, he didn’t think this bout was happening. The Derevyanchenko rep said that one contractual hurdle got ironed out, with the help of attorney John Hornewer, with Team GGG, and Al Haymon. Nope, he wouldn’t tell me what the hurdle was.

—Andre Rozier tried with Danny Jacobs to take down GGG..and he tried with Curtis Stevens to do the same. He stated that the third time will be the charm. He noted also that he wished Abel Sanchez were still with GGG, because he likes sparring with Abel. New trainer Jonathan Banks, he likes him too much, he shared.

—Hearn had kind words for Lou DiBella. His former rival, he said, wears his heart on his sleeve, like him, and he likes that. He humbly even admitted he learned from the NY-based deal-maker, over the last year.

—DiBella said this fight will be a real good rumble, and that you can’t make fighters fight, even if a contract indicates that should be the case. He was referring to Alvarez…

—Derevyanchenko spoke Russian, and was interpreted by Vladimir Lik. “His time is coming to an end, I want to be the one to make his time come to an end,” the challenger stated of GGG.

—Tom Loeffler had a good mic session. He welcomed Hearn to the team, and noted that Sergiy is getting big bucks. The same chance wasn’t afforded to young GGG when he wanted a crack at Dibella’s guy Sergio Martinez, he told the press.