Luis Feliciano has high hopes for boxing career, and a criminology degree as backup 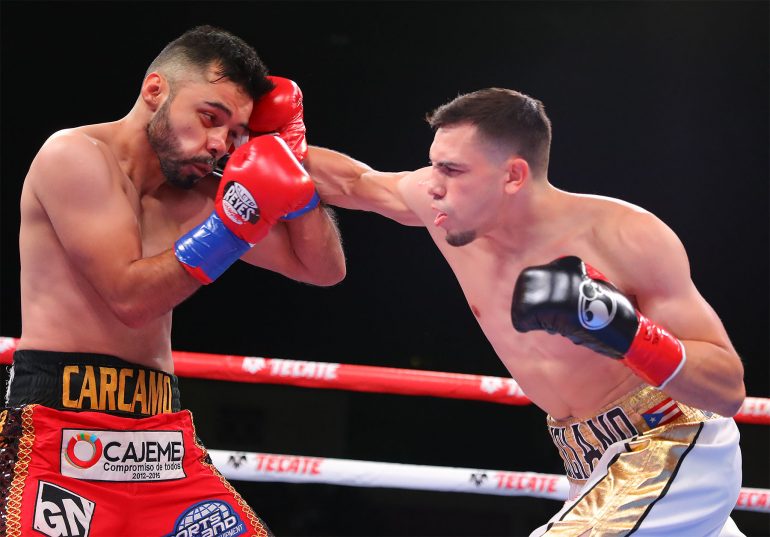 Luis Feliciano takes aim at Fernando Carcamo in a seventh round KO win in his most recent fight in June. Photo by Tom Hogan-Hoganphotos/Golden Boy
21
Aug
by Vladimir Lik

Luis Feliciano believes he is capable of beating his opponents using his brawn, but the Marquette University graduate would rather use his ring IQ to take down fighters.

He’ll look to show that when he faces the equally unbeaten Genaro Gamez on the latest installment of Golden Boy’s Thursday Night Fights series at the Fantasy Springs Casino in Indio, California. The event will be streamed live on RingTV.com and on Facebook Watch via the Golden Boy Fight Night Page beginning at 10:00 p.m. ET/7:00 p.m. PT. The series will also be available on regional sports networks around the nation. To see when and where the series is available in your area, click here.

Feliciano (12-0, 8 knockouts) knows all about discipline and sacrifice as he had to endure long training camps while maintaining a full-time course load at Marquette. Feliciano was fortunate enough to earn various scholarships based on both athletics and academics to attend the prestigious university.

“Getting my degree is one of my most proudest accomplishments,” Feliciano told The Ring. “This is boxing and you need to have a plan B. Even if you hope to never use it anything can happen to me inside and out of the ring so I wanted to be covered either way.”

While obtaining a degree in criminology and law studies was important, the 26 year old Feliciano still managed to have a decorated amateur career, netting five national championships and representing the United States in multiple international competitions. After fielding offers from several high profile promoters Feliciano chose to sign with Golden Boy Promotions because he saw the exposure other up and coming fighters were receiving.

“The platform that Golden Boy has was a major deciding factor for us when we decided to go with them,” Feliciano explains. “It’s exactly for fights like this against other undefeated fighters that the whole world can see. I know this is an opportunity for me to make a huge statement and that’s exactly what I plan to do.”

“This camp was totally different than the last one when I fought Carcamo,” Feliciano explains. “Last time everything was rushed because we took the fight last minute. I hardly had to time to prepare. This camp we made adjustments and I had time to plan for Gamez. I know he is aggressive and likes to come straight forward which will work in my favor.”

Feliano, who was born in Milwaukee with roots in Puerto Rico, moved to California shortly after turning pro to give his boxing career the maximum exposure in order to secure the biggest fights.

“I really couldn’t find quality sparring in Milwaukee,” Feliciano said. “I would have to go to Chicago to spar quality guys so I moved to Southern California to chase my dreams. This is another sacrifice I made to leave my friends and family behind.

“That’s why this fight is so important to me. I am treating it like a world title fight because that’s how much I want to get this win on Thursday.”