Kosei Tanaka: ‘My fight with Jonathan Gonzalez will be a high-level match’ 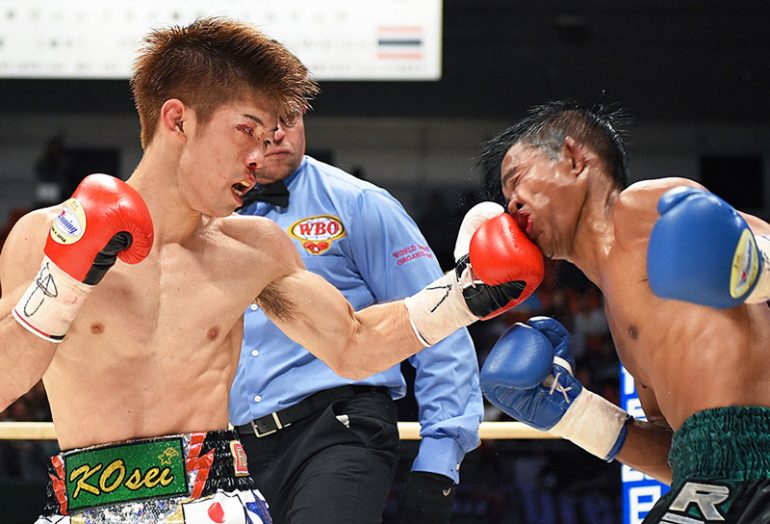 Kosei Tanaka will put his WBO flyweight title on the line for the second time when he faces mandatory challenger Jonathan Gonzalez at the Takeda Teva Ocean Arena in Nagoya, Japan on Saturday.

A three-division titleholder, Tanaka, who is ranked No. 1 by The Ring at 112 pounds, won his latest belt last September with a hard-fought majority decision over Sho Kimura. The Japanese star then beat long-time rival Ryoichi Taguchi in March to cement his position at the top of the division.

Tanaka expects another tough challenge when he meets his talented Puerto Rican opponent.

“I think that my fight with Jonathan Gonzalez will be a high-level match,” Tanaka (13-0, 7 knockouts) told The Ring through Marivic Kamiyama.

“He is a fast and very good fighter. As a precaution for Gonzalez, we have been improving my speed. Speed, of course, is better than all the other skills.

Tanaka was pleased to have finally met Taguchi, having seen a December 2017 fight fall through. However, he admits that he wanted more from his performance.

“I really wanted to fight with Ryoichi Taguchi and it was a good match,” Tanaka said. “However, I am not completely satisfied with my performance. One of the reasons is that I didn’t win by KO.”

For his latest assignment, the 24-year-old Tanaka spent two weeks training in the Philippines and also prepared diligently at home. He sparred with his brother, Ryomei, a top amateur, who is hoping to fight at the 2020 Olympics in Tokyo. Like Gonzalez, Ryomei is a southpaw.

Tanaka wants to keep challenging himself and fight the best available opposition, both in Japan and overseas.

“I would like to fight with boxers who have world-class abilities and achievements, regardless of their nationality,” he said.

His father and trainer, Hitoshi Tanaka, who has expertly maneuvered his son, has focused on certain key skills that Gonzalez possesses.

“It’s been a long time since Kosei fought with a southpaw boxer, so we practiced distance and speed,” said Tanaka Sr.

“I don’t know if there will be (another) match at the end of the year, but we will do it if it is decided.

“As for future weights, I will decide according with the growth and condition of Kosei’s body.”

Following a stellar amateur career, Gonzalez (22-2-1, 13 KOs) turned professional in 2011. Much was expected of the diminutive southpaw who moved quickly before tasting defeat for the first time against former titleholder Giovani Segura in 2013.

It took a while for Gonzalez to get over his first professional setback and he suffered a second defeat at the hands of Jobert Alvarez in 2016. The 28-year-old has bounced back well, winning all four fights to earn his title shot.