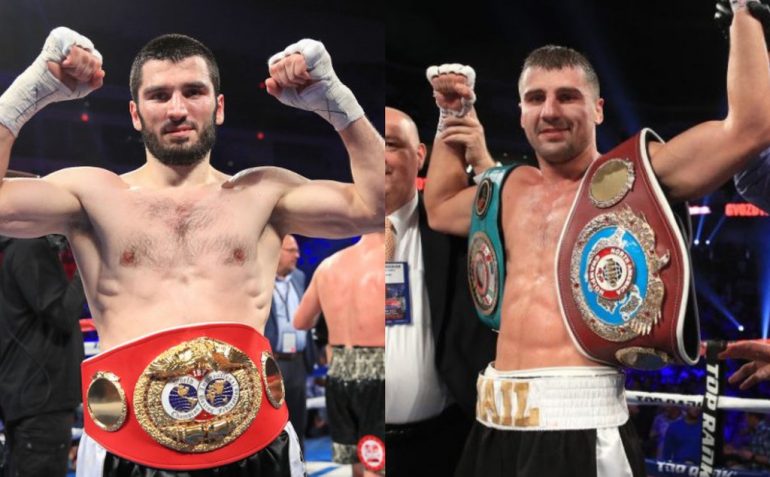 The fight to unify one half of the light heavyweight division is officially set.

Oleksandr Gvozdyk and Artur Beterbiev will put their respective world title belts on the line on Oct. 18 at the Liacouras Center in Philadelphia.

This is an intriguing clash between former amateur stars who are unbeaten in the professional ranks.

“This could very well be the fight of the year,” said Top Rank chairman Bob Arum. “These are two evenly-matched, undefeated light heavyweight champions. There is nothing better in the sport of boxing.”

Gvozdyk, who is originally from the Ukraine and now resides in Oxnard, California, won the WBC title on Dec. 1, coming from behind to stop Adonis Stevenson in 11. He made his first defense on Mar. 30, stopping Doudou Ngumbu in five. The 32-year-old Gvozdyk (17-0, 14 knockouts) has stopped 10 of his last 11 opponents.

“My first goal was to win a light heavyweight world title,” said Gvozdyk, who is managed by Egis Klimas. “Now, I want to unify the belts and that mission starts with Artur Beterbiev. This is going to be a spectacular fight, one that the fans will enjoy. The fans asked for this fight and we will deliver. One thing I know is that I will be the unified champion. I have the best trainer, Teddy Atlas, in my corner. This is our third fight together and under his guidance, I will continue to get better.”

Beterbiev, who is originally from Russia and now resides in Montreal, Canada, won the vacant IBF title in November 2017, knocking out Enrico Koelling in the final round. The 34-year-old power-puncher made his maiden defense against Callum Johnson on Oct. 6, stopping him in the fourth round. In his last bout on May 4, Beterbiev knocked out Radivoje Kalajdzic in five.

“This will be a great fight between the two champions who aspire to become the undisputed light heavyweight world champion,” said Beterbiev (14-0, 14 KOs). “I am looking forward to stepping into the ring on October 18.”

Gvozdyk and Beterbiev are ranked No. 1 and 4 by The Ring, respectively.