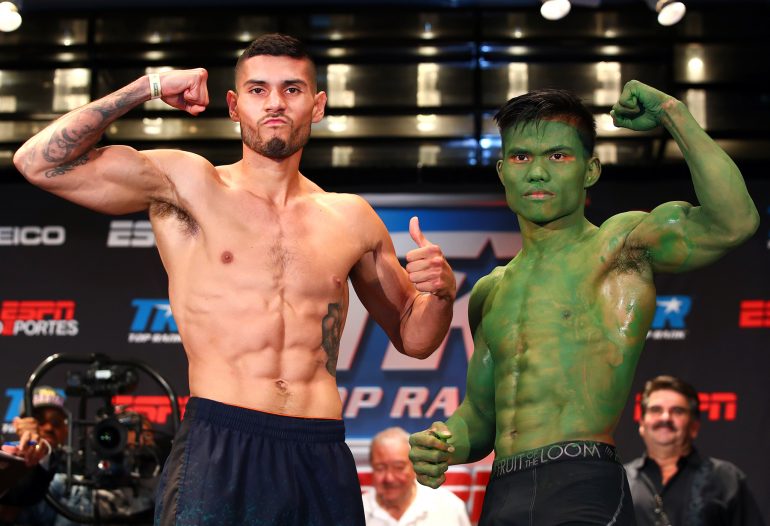 With the victory, Barboza improves to 22-0 (9 knockouts).

Barboza, who resides in the Los Angeles suburb of El Monte, scored his most impressive win to date in his previous bout on Apr. 12, knocking out Mike Alvarado in the third round. Sismundo, who is originally from the Philippines and now resides in Yokohama, Japan, took the fight on less than a week’s notice when Jorge Luis Rodriguez back out of the fight.

Sismundo (35-15-3, 17 KOs) was game, but Barboza was too strong and too quick for the smaller Sismundo. Barboza battered Sismundo during the third round, pinning him against the ropes and landing a barrage of punches to the head and body. Barboza punctuated the round by dropping Sismundo with a left hook to the head.

Sismundo was able to beat the count as the bell sounded to end the round.

Barboza continued the barrage of punches in round four. Sismundo attempted to fight back, but his punch output dropped significantly after each exchange.

After the bell sounded to end the round, Sismundo walked over to the ring ropes and crouched down. Referee Ray Corona asked Sismundo if he was able to continue, and when Sismundo shook his head, Corona waved the fight off.

The 27-year-old Barboza, who is ranked No. 4 by the WBO, has now stopped three of his last four opponents. Barboza believes he is ready for a world title shot.

“I want a world title shot now,” said Barboza. “I want to challenge all the champions. It doesn’t matter who it is, or where it takes place. All I want is to face Ramirez, Prograis, or Taylor, and I want it now!”

Fringe welterweight contender Chris van Heerden had to deal with cuts over both eyes to grind out a hard-fought unanimous decision victory over Aslanbek Kozaev.

Kozaev, who resides in Vladikavkaz, Russia, pressed the fight from the opening bell, hoping to get on the inside of van Heerden’s guard. An inadvertent clash of heads opened a cut over van Heerden’s right eye.

Van Heerden (28-2-1, 12 KOs) continued to outbox Kozaev, but another clash of heads opened another cut this time over the left eye of van Heerden in round five. Blood oozed out of both cuts, but a ringside physician told referee Jack Reiss to let the bout continue.

Both fighters let their hands go in round seven, bringing cheers from the crowd at Banc of California Stadium, but van Heerden landed the more-effective punches.

Scores were 79-73, 79-73, and 78-74 for van Heerden, who is originally from South Africa and now resides in the Los Angeles suburb of Santa Monica. Van Heerden has won his last five bouts since his knockout loss to Errol Spence in September of 2015.

Molina, who resides in nearby Norwalk and represented the United States at the 2008 Olympic Games in Beijing, mostly outboxed Mendez throughout the fight. Mendez (16-6-3, 11 KOs), who resides in Colton, California, had his moments on the inside, but Molina lander the more-effective punches.

Middleweight prospect Janibek Alimkhanuly of Kazakhstan broke down Stuart McLellan before stopping him in round five.

Alimkhanuly (7-0, 3 KOs) dropped McLellan in the second round. McLellan (27-4-3, 11 KOs), who resides in Williams Lake, Canada, was game but was not able to overcome Alimkhanuly’s power and accuracy.

Towards the end of round five, Alimkhanuly dropped McLellan face-first to the canvas. McLellan beat the count and attempted to fight back, but was getting battered against the ropes by Alimkhanuly. McLellan’s corner saw enough and threw in the towel, prompting referee Rudy Barragan to stop the bout at 2:51.

Yun was dropped with right hands to the head in rounds one and three, but was the superior fighter of the two. Martinez (4-7, 3 KOs), who resides in Austin, looked exhausted by the midway point of the fight. He was deducted a point by referee Jack Reiss in round three and five for excessively spitting out his mouthpiece.