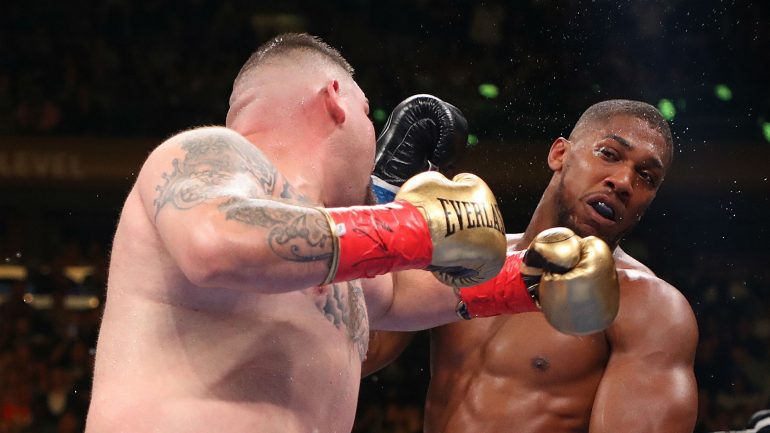 Andy Ruiz has comported himself quite well as the champ, making the rounds and greeted fans, doing media appearances, and going on shows like “Jimmy Kimmel.”

But don’t let the affability and chubby physique lull you into thinking that Ruiz doesn’t play hardball in that ring…or, indeed, outside.

The Cali boxer, who flipped the script and did a shocking re-write at Madison Square Garden on June 1, dropping and stopping Anthony Joshua, is proving himself to be a stern competitor outside the ring.

On Tuesday, Ruiz took to his Instagram account and gave his fans and boxing fans across the board an update from his standpoint about the planned Dec. 7 rematch, which should pit the Mexican American against AJ, in Saudi Arabia.

“I know everyone is talking about the (second) fight and all that,” Ruiz (33-1, 22 knockouts) shared.  “We got the real news coming soon, but the fight is gonna happen soon. AJ got the rematch, yes we do got the rematch. But it’s gonna be on my terms… on our terms. We’re gonna bring it back here in the United States.”

That would be news, breaking news, to the promoter of the event, Eddie Hearn. The charming Brit dealmaker met on Monday with the main man in Saudi Arabia who is, or would be, overseeing the Dec. 7 event which would be far and away the highest-profile boxing deal that nation has crafted. In recent years, the nation’s rulers have sought to bring athletic events, golf, auto racing, and now boxing, to the region. They want to give their citizens fun and games, and also show the world that they have become more open, more progressive.

Sounds good on paper. But speaking of paper. Ruiz knows that Hearn and more so Joshua are the recipients of a pile of loot paid out by the Saudis to land the tango. Maybe up to $100 million or so. And Ruiz had signed to fight Joshua and because the AJ people know that the best laid plans of mice and men and boxing promoters oft go awry, terms for a rematch were inserted. If AJ were to lose to Ruiz, which, frankly, a narrow few predicted, then the Brit would be covered. Specifics weren’t so much included, that would be putting the cart before the horse. Now, it’s those specifics which are being debated.

Hearn on Monday asserted that both fighters had signed on for the Dec. 7 slate. But it seems Ruiz isn’t on that same page. He’s under the Al Haymon/PBC umbrella, and Leonard Ellerbe, who works hand in hand with Haymon, is publicly applauding the Ruiz IG shot heard round the world, including the Middle East.

Social media legal experts insist that the ball is in Hearn’s court, he has contractual coverage. And that may well be. This could simply be Ruiz flexing muscles, but knowing that he will have to accede to the AJ terms, and trek to the Middle East, where he’s asserting he’d be on the B side. That’s why, he says, he wants to have AJ come to America, the scene of Ruiz greatest triumph, and Joshua’s disastrous outing.

Smart sorts are guessing that this is posturing…but with boxing, one never knows. Hearn seemed assured that Ruiz and Joshua would be standing across from each other in Saudi Arabia Dec. 7…but it looks like one or more wrinkles have to be ironed before his vision moves toward maturation.

Oftentimes, those wrinkles magically disappear when the pot gets sweetened. Ruiz is sending the message that he needs to see more sugar.