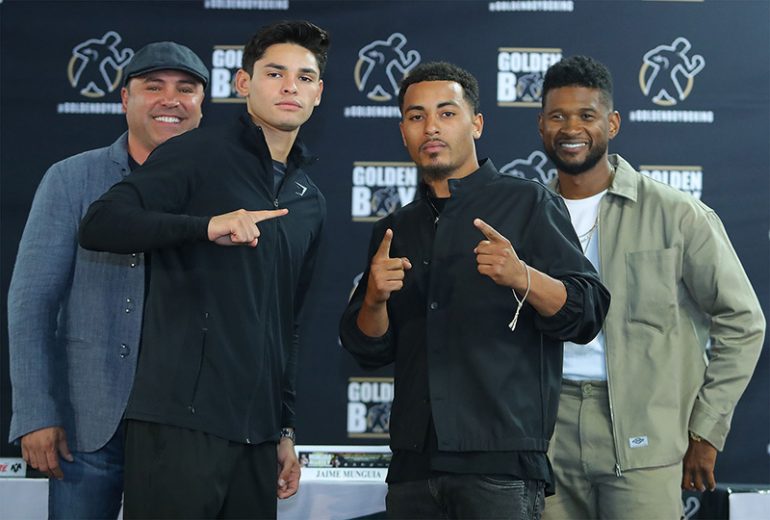 Ryan Garcia (flanked by promoter Oscar De La Hoya) and Avery Sparrow (next to his manager, Usher) faced off at the L.A. presser for their Sept. 14 DAZN co-feature.
13
Aug
by Manouk Akopyan

Ryan Garcia passes the smell test of perhaps one day becoming a boxing behemoth. The only question that remains is if the 21-year-old with boyish looks and flashy speed can translate the same success he’s seen as a socialite into breakout star savvy in the sweet science.

Garcia switched training headquarters to work with Canelo Alvarez’s coach Eddy Reynoso and alongside the sport’s biggest bread winner to expedite his maturation process. The power pairing was designed to help catapult Garcia as a serious player in the sport, and almost a year later, he’s inching closer toward proving it with a world title opportunity.

Garcia will step into the ring with another tough test in front of him when he takes on Philly fighter Avery Sparrow (10-1, 3 knockouts) on September 14 at the Dignity Health Sports Park in Carson, California as the co-feature of the Jaime Munguia-Patrick Allotey fight on Mexican Independence Day Weekend.

Although no titles will be on the line, if Sparrow wins, it could be just as significant beating a boxer with over three million followers on Instagram, a feat Garcia has accomplished with diverse Gen Z audiences outside of boxing enthusiasts.

Garcia’s online fame and prowess pitches somewhat of a Catch 22, even though he sports a perfect record of 18-0 and 15 knockouts. He catches flak from the doubters he alluded to for hitting a heavy bag by the morning, and the New York Fashion Week runway modeling for Tommy Hilfiger by night. Wanting to make sure his punches were as slick as his smile, Reynoso was tagged into the picture.

“He doesn’t play around. He really wants me to get better. Eddy believes in me because he sees it in the gym,” said Garcia. “I can take on a variety of different styles. You haven’t fully seen what I’ve learned, because my last fight ended quickly.”

Garcia made easy work of Jose Lopez in March, and Braulio Rodriguez before that in December, and sixteen other opponents before them. He’s now looking to diversify his hit list and portfolio while silencing his critics by beating Sparrow, a fast fighter who’s a good counter puncher coming to win. He was specifically matched against Sparrow because Golden Boy wanted him to experience a different style, and perhaps even deal with a bit of adversity.

“This is going to be a tough fight for Ryan because he’s going to see a fighter unlike any type he’s seen as a professional,” said Golden Boy matchmaker Robert Diaz. “I expect some tough bumps in the road because Avery is no joke.

“Every time Ryan steps into the ring, he has a target on himself. He still hasn’t developed the power because he’s maturing as a man and growing into his body. What makes him great is no one sees his punches coming.”

With Reynoso at the helm, Diaz believes Garcia will be ready for a world title opportunity within his next three fights. 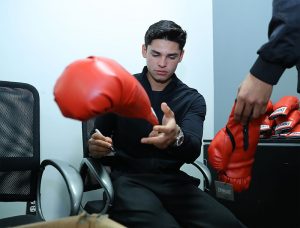 In the meantime, Golden Boy wants to continue building Garcia much like they have Vergil Ortiz Jr., arguably boxing’s best blue-chip prospect. Garcia is not too far behind in the pack alongside the likes of Teofimo Lopez and Shakur Stevenson, waiting in the wings to become a household name in boxing.

“I like to take it one fight at a time and see how they pass the test,” said Diaz. “Ryan has the discipline to go along with the talent, confidence, speed and ability to adjust. Most fighters his age don’t have the discipline. He works his ass off.

“You have to be mature to handle the popularity that Ryan has, and not fall apart. He’s showing it. Training with Canelo has motivated him to work harder. The sky’s the limit for Ryan.”

Manouk Akopyan has been a member of the Boxing Writers Assn. of America since 2011 and has written for the Los Angeles Times, USA Today, the Guardian and Philadelphia Inquirer. He can reached on Twitter, Instagram and YouTube at @ManoukAkopyan or via email at [email protected].