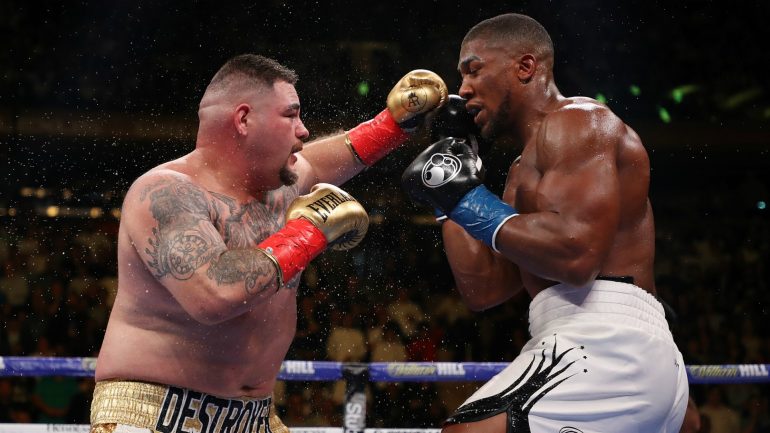 Eddie Hearn doesn’t really care what you think. Nor you, or you, or what you think over there. He never has. The boxing iconoclast has done what has always been best for him—and it’s made him a lot of money and highly successful.

So, to take the anticipated Andy Ruiz Jr.-Anthony Joshua heavyweight title rematch to Saudi Arabia, where a 12,000-seat outdoor arena will be built in Diriyah, is not really that much of a reach for Hearn or Matchroom Boxing. In fact, the fight Hearn has dubbed “Clash on the Dunes,” does seem like something Hearn would do, especially when it’s attached with what the BBC reported as a $40-million site fee.

It should be his mantra.

And no one should begrudge him of where it’s landed him.

In this case, Saudi Arabia.

Amnesty International has criticized the choice. Saudi Arabia is rife with human rights violations, which includes the murder of journalist Jamal Khashoggi and bombing the tiny nation of Yemen into oblivion.

That doesn’t matter. It’s boxing. Like when the world looked away for the “Rumble in the Jungle,” held in 1974 Zaire, then under the tyrannical rule of Mobutu Sese Seko.

No one associated with this fight advocates what’s gone on in Saudi Arabia. It’s just the bromide of the entitled: They always get what they want. Or in more old-school parlance, money talks, and you know the rest. When serious money is involved, those little nuisances like human rights atrocities are simply bypassed. Heads tend to turn when stacks of money are handed out.

“There has been a lot of talk about where this fight would be held,” Hearn said during a London press conference on Monday. “For us we wanted to go somewhere that believed in the sport of boxing, who had a vision. We have to realize there is a world outside of Cardiff and Madison Square Garden. This event could change boxing forever. You could be seeing a big change in the dynamics of the sport.

“When we realized Saudi Arabia was serious about boxing we looked into the logistical side and that blew our mind as well. Look at the events held there before us – Formula One, the European golf tour, the Italian Super Cup, WWE. It will be an iconic moment for boxing. With curiosity, the whole world will be watching this fight.”

The world won’t be watching.

DAZN subscribers who are boxing fans will surely tune in.

But in terms of cross-over mass appeal in the United States, forget it.

Fight fans around the world will be tuning in. That’s a given. What major events like Joshua-Ruiz II aim to garner are the general sports fan who wouldn’t normally be watching, that outstretched appeal the U. S. market provides.

Hearn and the DAZN wouldn’t want a piece of that?

One look, however, at the sports calendar spells it out: On Saturday, December 7th, 2019, ESPN and every other major sports network in the U.S. will be focusing on the Big 10, ACC, SEC and Big 12 college football championships—which will all be held on the same day.

It’s easy to call it “Championship Saturday,” with the Ruiz-Joshua championship rematch as an afterthought, relegated to the running scroll at the bottom of the screen.

Deontay Wilder, that famous Tuscaloosa, Alabama, resident himself, may be paying more attention to the Alabama-Georgia SEC championship game, along with countless millions, than hold any interest in Ruiz-Joshua II.

The NBA schedule is light that night with five games, sans any marquee matchup of prime teams, while the NHL has a full slate of games, highlighted by the Toronto Maple Leafs at the defending Stanley Cup champion St. Louis Blues on Canada’s legendary Hockey Night in Canada.

Now if the fight took place in New York, which many speculated it would, it still might get lost under the college football deluge, but at least the timing would be better, with a more likely 10 p.m. or 11 p.m. start, avoiding any head-to-head matchup with those college football championships, which more than likely will absorb prime sports viewership in all areas of the U.S.

Ruiz still has his Latin following, though it doesn’t touch the overflow Canelo Alvarez engenders. Joshua is still a relative unknown to the general American sports fans, who, regrettably, can probably only identify two fighters today, Floyd Mayweather Jr. and Manny Pacquiao, while some may recognize Canelo’s face from his Tecate commercials with Sylvester Stallone.

Otherwise, most fans would, also regrettably, confuse Ruiz with Jimmy Kimmel’s Guillermo Rodriguez. If shown Joshua’s face and asked to identify him, they may mistake him for an NBA forward or NFL lineman.

There are about 100 million pluses to the choice. But there are also a mountain of minuses with it, too, including the timing and placement that nixes the tepid interest of an important key nation, the United States, where boxing is sinking deeper, and deeper into an ever-depressing softer niche of the sports landscape.