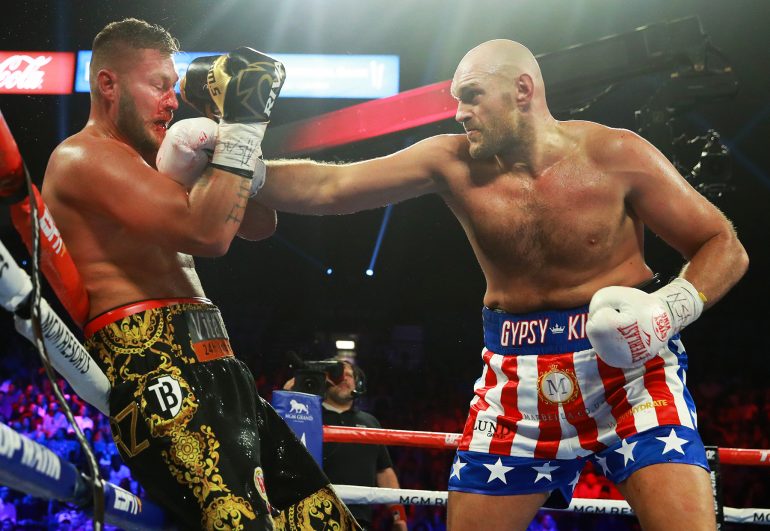 Former heavyweight champion of the world Tyson Fury will make his second straight appearance in Las Vegas when he faces Sweden’s Otto Wallin on Sept. 14 at the T-Mobile Arena.

Fury, who is rated No. 1 by The Ring at heavyweight, is coming off a second-round stoppage of Germany’s Tom Schwarz in June. The charismatic Englishman dazzled the crowd with an Apollo Creed-style ring entrance before dazzling Schwarz who was completely out of his depth.

“Otto Wallin is a world-ranked fighter and is tall, something we want with the Deontay Wilder rematch around the corner. He is also a southpaw, which will bring its own obstacles, but I will be fully focused to get this job done because the (Wilder) rematch needs to happen.”

The 28-year-old Wallin (20-0, 13 KOs) has been a professional for six years. His competition has been exclusively undistinguished, and there’s nothing to suggest that he can live with an opponent as seasoned as Fury.

“This is the type of fight I’ve been waiting for since I was a kid and my father started showing me some boxing moves in our kitchen,” Wallin said. “I’ve made a lot of sacrifices to get to this point and I’m very happy it’s starting to pay off. I want to thank my team and my supporters for making this happen.

“I know I’m an underdog in this fight, but I’m ready for this opportunity and I’m going to grab it with both hands. Anybody can get beat and especially in the heavyweight division. I like the fact that I have everything to gain and Tyson has everything to lose.”

Fury, 31, still retains status as the lineal heavyweight champion of the world.

Quotes courtesy of a press release issued by Queensberry Promotions.

Promoted by Top Rank, in association with Frank Warren’s Queensberry Promotions and Salita Promotions. Tickets for Fury vs. Wallin start at $105 and go on sale Friday, Aug. 16.

Tickets are also available for purchase online at www.t-mobilearena.com or www.axs.com, or charge by phone at 888-929-7849.