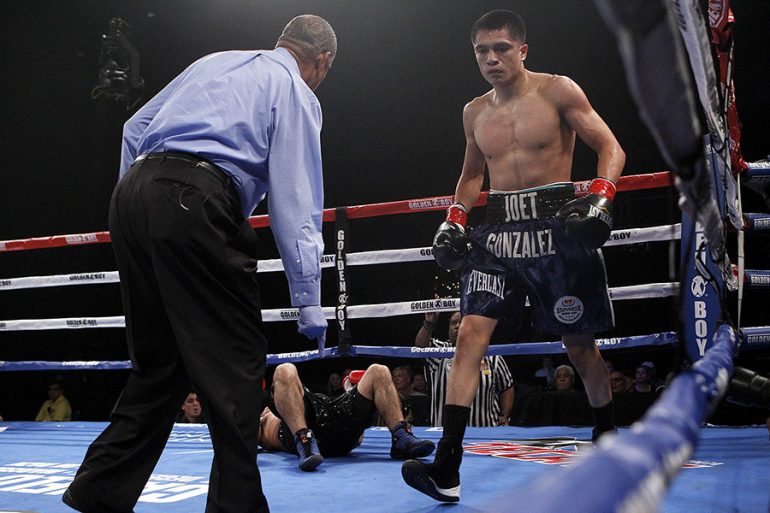 Shakur Stevenson has in the last year gained a bunch of converts who are now seeing him as a future superstar, and he’s not been shy about feeding those flames.

Stevenson isn’t scared to compare himself to Floyd Mayweather, and for a long spell now, he’s been agitating for a step up in competition and telling one and all he wants to secure a strap.

In pretty short order, he should be getting that chance and at the same time, stepping in with a fighter who on paper presents the stiffest test to date for the 22 year old New Jersey native, who holds a 12-0 (7 knockouts) mark.

You might have heard about this scrap being made for the WBO featherweight belt that Oscar Valdez vacated, though specifics haven’t come out. I checked in with Gonzalez, who lives in California, to get some more lowdown.

First off, he informs me that the chatter is true, to his thinking, there is some bad blood in the water surrounding this match. “Location is still to be determined but we are looking at a time frame for October and possibly early November being the latest.”

Is there indeed some saltiness and friction between Joet and Shakur?

“Unfortunately yes,” Joet said. The boxer came on the Everlast “Talkbox” podcast and said he’d love a crack at Stevenson. Shakur, he told me, didn’t dig it. “He started talking nonsense and had the nerve to bring up my family and my sister into it when it just could have been about us. But it is what it is, I’ll see him in the ring soon.”

Gonzalez comes from a fighting family: little bro and sister Jousce and Jajaira also do the pugilism thing.

Online chatter says this and that, that Shakur and Jajaira are or have been friendly. Is that an element of the bad blood present? “Yeah, it is what it is and honestly can care less ’cause it was just my opinion and an honest interview and yes,” Joet continued.

He’d rather simply concentrate on the in-ring aspect of the faceoff, of course, but seems smartly resigned to this being an “it is what it is” situation. “That’s why there’s bad blood cause he mentioned my family and sister and all because of an interview and my opinion. When it could have been only about us. I wouldn’t have cared if he would have talked shit about me but he did what he did…and now I’m gonna humble him.”

NOTE: I asked through a rep if Shakur wanted to respond. Not at this time, I was told. I will insert a reply if he changes his mind.

So…back to the in-ring angle…How would Joet seek to hand Shakur, who scored a stoppage in his last effort on July 13 over Alberto Guevara in NJ, his first loss?  “I can’t really say ‘how’, but for people to say he’s a young Mayweather is only going to push me to be at my best in every aspect in the ring,” he continued.

Having seen Shakur, does Joet think he’s seen a GREAT fighter…or merely a good one?

“Just a good fighter,” Joet continued. “I honestly don’t think he brings anything that’ I’ve never seen before. Don’t get me wrong, he’s good, I mean, you don’t get an Olympic silver medal by being average. I just don’t think he’s great.”

The difference maker will be, what?

“The hunger to win! Something none of his opponents have after rounds go by.”

Shakur is quite heralded, and with that comes high expectations, and some folks start thinking he’ll never get tested. They assume if someone who isn’t an across the board well-known entity is matched with him, Shakur will dominate. I wondered, has Joet sensed that by and large people are thinking Stevenson will streamroll him?

“Reaction has been both negative and positive but it’s part of the sport. He has his fans/supporters and I have my fans/supporters. But I’m used to it and heard it all, I don’t let the good or bad get to me cause at the end of the day it’s only going to be me and him and that ring. I’m just going to go in that ring and fight my fight and whatever happens happens.

“When that day of the fight comes I will come out victorious and be the new WBO featherweight world champion. It’s my destiny.”