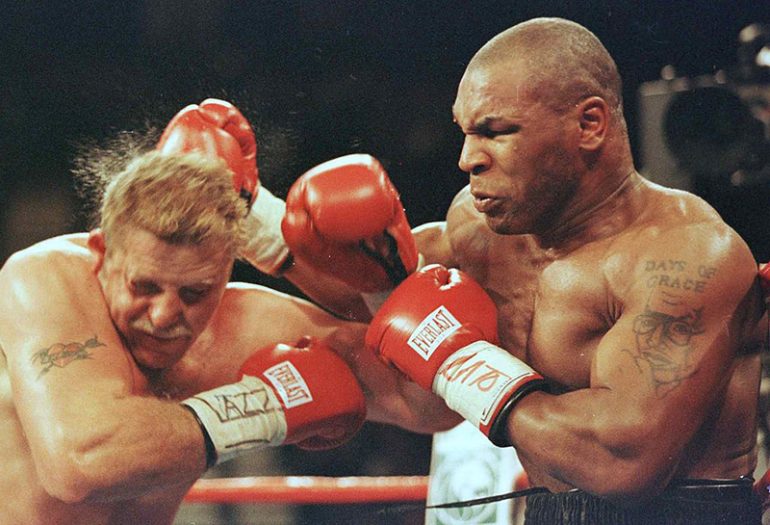 The last time I wrote in was to ask you how good you thought Teofimo Lopez might be and get your pick of which lightweight would give Vasiliy Lomachenko the toughest fight.

You picked Luke Campbell and now the fight is made, and I’ve got tickets! I am so, so excited to see Loma fight in person. I can’t see him fighting in the UK again. It feels like a once in a lifetime opportunity. What do you think of the fight?

My main question though is what would you pick as the one fight or fighter you’ve been most excited to see because you knew it might be the only time you’d see them live?

(P.s. as a comic, manga and Naoya Inoue fan I just wanted to say the George Morikawa cover was amazing.)

All the best to yourself and the family. – Phil, Liverpool

Thanks for checking in, Phil. I’m glad you’re into the cover for the September 2019 issue of The Ring. “Monster Manga” is the most popular cover concept we’ve come up with since my tenure as the magazine’s editor-in-chief.

I think Lomachenko will return to the UK after his lightweight title defense against Campbell, but you’re still gonna want to see him live at O2 Arena on August 31. I’ve been ringside for Loma’s pro debut (on the Tim Bradley-Juan Manuel Marquez undercard in Las Vegas in 2013), his first title win (against Gary Russell Jr. in Carson, Calif., in 2014), his showdown with Ring Magazine/WBA lightweight champ Jorge Linares (at Madison Square Garden in NYC last May) and his recent title defense against Anthony Crolla in Los Angeles in April. Every time I watch Loma fight live I see something new in his athleticism and approach to boxing. He’s a special talent and competitor and witnessing live is a special experience.

I think Campbell’s skill, style and stature will enable him to last longer than his countryman, Crolla, and I expect a competitive fight (probably a bit of a chess match) for at least the first half of the bout, so you’ll have ample time to appreciate Loma’s brand of ring artistry. 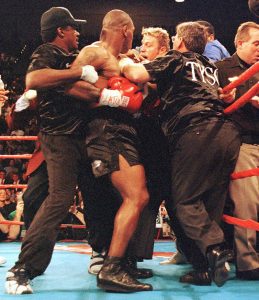 Both corners rushed the ring when Tyson refused to release Botha from an arm lock after the bell ended Round 1. Photo by Jeff Haynes-AFP-Getty Images

My main question though is what would you pick as the one fight or fighter you’ve been most excited to see because you knew it might be the only time you’d see them live? Probably Mike Tyson against Frans Botha 20 years ago. It was his first bout back following his suspension for the infamous Evander Holyfield “Bite Fight” in 1997, I’d never seen him fight live before, and it was the first major boxing event in Las Vegas that I was credentialed to cover as media (for my old House of Boxing website). I figured Tyson was sick of the sport (or just tired of being used by boxing’s power brokers) and would either find a way to get himself DQ’d vs. the South African (which nearly happened in Round 1 when he got the “White Buffalo” in an armlock), lose the fight (either due to ring rust or disinterest or a combination of both) or win and then immediately announce his retirement. I was wrong, of course, (maybe not about him being sick of boxing but about Botha potentially being his last bout) as he fought nine more times. I covered his next bout (a one-round No Contest against Orlin Norris), also in Vegas, and his two-round stoppage of Andrew Golota (later changed to a No Contest because Tyson tested positive for weed after the fight) in Auburn Hills, Michigan. Getting back to the Botha bout, which took place at MGM Grand in January 1999, it was as exciting as I thought it would be, not so much the fight, but rather the event. Tyson attracted fans and media from around the globe, including a lot of celebrities, entertainers and “underworld” types.

I was reading your Friday Mailbag and enjoyed the inquiry and your responses to the James Toney discussion. In one of your responses you mentioned that “In retrospect, however, I think leaving him out was a mistake (which happens with those kinds of lists; I also left out Michael Spinks, which was another obvious oversight.)”

Since I’m such a boxing nerd for these types of discussions then I’ll need to throw this question right back in your direction. If Lights Out and Spinks Jinx would retroactively be a part of your 40 honorable mentions list then which two from your previously list would you take out in their place? – Eli, Austin, TX

Good question, and a difficult one, because all of my honorable mentions were sensational boxing talents and incredibly accomplished.

Here’s the list from my commentary piece (and a reminder to those who haven’t read it, my top 20 and “also-rans” were not to include “old-timers” defined as those whose last bouts took place before 1943): 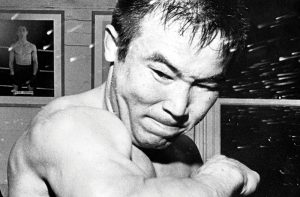 Fighting Harada, aka Masahiko Harada, prior to challenging for the featherweight world title in 1969. (Photo by Central Press/Getty Images)

boxer (at least until Naoya Inoue realizes his vast potential), and the former flyweight and bantamweight champ probably should have been a three-division champ (as his first bout with Johnny Famechon, in the featherweight champ’s native Australia, ended in a 15-round decision that could have gone his way), but his legacy is mainly built on two very close decision victories over the great Eder Jofre – both of which took place in Japan and both of which could have gone to the brilliant Brazilian  bantamweight. Rodriguez is a personally favorite of mine and I think he’s underrated because of his very brief welterweight title reign, but the Cuban boxer-puncher notched over 100 wins and has victories over fellow hall of famers Emile Griffith and Curtis Cokes, as well as top middleweight contenders, such as Rubin “Hurricane” Carter and Joey Giambra. However, he lost three out of four bouts to Griffith and two out of three to Cokes; and was also stopped cold by HOFer Nino Benvenuti in a middleweight title challenge. I think Zale is the poster star for the middleweight division, and also underrated as he’s often defined by his trilogy with Rocky Graziano and his TKO loss to Marcel Cerdan (bouts which took place when he was well past his prime) rather than his prime victories over Al Hostak and Georgie Abrams (which earned him world champion status), but those two aren’t hall of famers. Zarate, in my humble opinion, is one of the five best bantamweights ever and one of the 10 best boxers from Mexico, however the KO king only fought three hall of famers and he lost to all three. Spinks only fought three HOFers but he beat two (Dwight Muhammad Qawi and Larry Holmes), plus he beat the quality light heavyweight contenders (such as Eddie Mustapha Muhammad, Marvin Johnson and Yaqui Lopez) when that division was very deep.

MANNY PACQUIAO: FIGHTER OF THE YEAR AND DECADE

The fighting Senator from the Philippines fought twice this year, whitewashing former four division world champion Adrien Broner
in the defense of the WBA regular welterweight belt at the age of 40 and outpointing super champion Thurman in their WBA title unification bout barely five months before his 41st birthday in December.

Pacquiao had to settle for a split decision over Thurman in a fight many believed he should won in all of the judges’ score card. He scored the fight’s only knockdown and hurt the taller, bigger and heavier American a number of times during the fight, especially to the body which ironically you said would be Pacquiao’s potential achilles heel against the same Thurman.

With the great performance and convincing win. Pacquiao has drawn raves even from the most skeptical observers, including fight experts and scholars who have marveled at what he can still accomplish at such advanced age.

You may be right that his accomplishments this year may not be enough for him to win the Fighter of the Year award but I think his body of work over the past almost ten years put him firmly in the discussion for the Fighter of the Decade award.

Though admittedly Pacquiao suffered two conclusive defeats within the current decade to Juan Manuel Marquez who coldcocked him in six rounds in 2012 and Floyd Mayweather, Jr. who beat him by unanimous decision in 2015 (his other two losses in the period, both on points, to Timothy Bradley in 2012 and Jeff Horn in 2017 were both highly questionable), he still in my point of view has the strongest resume among the current, still active fighters who may be considered for the Fighter of the Decade award.

He has fought sixteen times since 2010, notching 12 wins as against 4 defeats against a veritable array of formidable opponents including a few who are cinched or could be in high consideration for future enshrinement in the Hall of Fame including Mayweather, Marquez whom he also beat on points in their other confrontation during the period, Shane Mosley and Tim Bradley who are all multi division world titlists like himself.

He also fought and defeated the likes of Joshua Clottey, Antonio Margarito, Chris Algieri, Brandon Rios, Jessie Vargas and Lucas Matthysse who were either reigning or former world titleholders at the time he faced them.

He chased Mayweather for nearly half a decade with the latter obliging only when he felt Pacquiao was already vulnerable enough for the taking. But even then, the loss to Mayweather was put to question by Pacquiao’s pre fight shoulder injury and Floyd’s illegal IV rehydration, which Hauser said could have even masked ped juicing.

I do not know of any other current active fighters and champions who could top or even come close to what Senator Pacquiao has accomplished during the decade where fighters like Crawford, Lomachenko and Inoue only made their mark passed the halfway point, i.e. 2015 onwards.

Regards from the Philippines! – Teddy

I think Pacquiao is a candidate for Fighter of the Decade, which is an amazing feat considering his age and the fact that he won the Boxing Writers Association of America’s award for the previous decade (2000-2009). How many fighters have been worthy of the FOTD honor (which the BWAA didn’t begin awarding until the 1990s) in back-to-back decades? Sugar Ray Robinson (1940s and ‘50s)? Muhammad Ali (1960s and ‘70s)? Roberto Duran (1970s and ‘80s)? Pacquiao is in great company.

I think he’s in the discussion for the BWAA’s award for this decade along with his nemesis Mayweather, Canelo Alvarez, Andre Ward, Gennady Golovkin, Vasiliy Lomachenko, Roman Gonzalez and maybe Terence Crawford.

My guess is that an undefeated American – either Floyd or Dre – will get the majority of the BWAA’s vote. 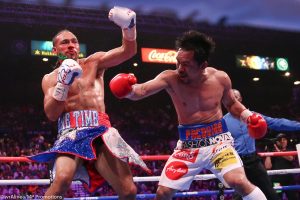 Pacquiao is also a candidate for Fighter of the Year. The victory over Broner isn’t nearly as significant as you make it sound by noting the Ohioan’s world titles in four divisions (most can’t name three of the four opponents he beat to win those alphabet straps without the aide of Boxrec), but the decision over Thurman was impressive. That’s one of the best performances of 2019.

However, we still have four and half months left in the year and a lot can happen in that time. If Andy Ruiz Jr. beats Anthony Joshua again I’m guessing he’s going to be the front-runner for the FOTY award. If Canelo Alvarez is able to take on Sergey Kovalev (provided the light heavyweight titleholder gets past Anthony Yarde this month) before the end of the year, and the middleweight champ beats the Russian, well, I’m thinking he’ll be the front-runner for FOTY.