PHILADELPHIA, PA – The phrase bounced from the speakers at Temple University’s Liacouras Center: “We have a split decision,” and the thought caused Adan Gonzales to momentarily freeze.

The same idea coursed through the Denver, Colorado featherweight’s mind like everyone else that watched his great effort against two-time Cuban gold medalist Robeisy Ramirez—he was going to get screwed.

Adan Gonzales was brought across the country to lose. Afterall, Ramirez had the great backstory that was laid out over eight pages in Sports Illustrated about how he escaped from Cuba and was getting ready to embark on what promised to be a successful pro career.

Gonzales got in the way.

“That drove me to win this fight.”

Gonzales’ career-changing victory started with a knockdown within the first 20 seconds of the fight, when Gonzales unfurled a left hook. When Ramirez pressed the action, Gonzales fought back.

“I heard ‘split decision,’ and it was in the back of my mind that I would get screwed, because I knew I won every single round,” Gonzales said. “I thought they were going to give it him. I’m just grateful they scored it right.

Gonzales was asked if he had to take a plane back home to Denver, or could he run home he was so charged with the victory.

He laughed at the notion.

“Hey, working in those mountains, running in the thin air of Denver, I can run all day,” Gonzales said. “It’s tough, it’s really, really tough to work through it. I felt like I could fight another four rounds.”

In the second, Ramirez quickly went to the attack, digging a left to the body. Wearing a constant smile, Ramirez seemed to be feigning he was the one in control. Through two rounds, he wasn’t. Gonzales was outboxing the venerated amateur.

Ramirez pounded a few left hooks off of Gonzales, but the underdog was unmoved by anything the Cuban expatriate did.

In the fourth, Gonzales was the more active fighter. Ramirez, who was down on the scorecards, needed to fight with more urgency. He did land one big left that, but Gonzalez fought back hard again, forcing Ramirez back.

“I felt I won the fight,” Ramirez said through an interpreter. “I thought it was a bad decision and that I landed the more efficient punches. I also thought I blocked a lot of the punches he threw.

“I feel like this loss will stymie the rest of my career. It’s hard to think right now what I can learn about this. It’s unfortunate and it was a really bad decision.”

It was as uneventful as the Gonzales upset was momentous.

Sosa dominated from the start, knocking Rhodes down twice in the fifth and for a third time in the seventh, before Rhodes’ corner ended it at 1:08 of the seventh round. 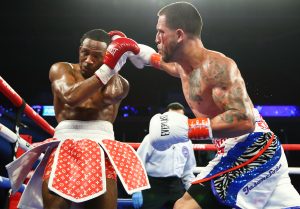 “It was pretty satisfying,” Sosa said. “I think we did everything we were supposed to do tonight. There’s room for improvement, but we’re a top contender now once again. We never left. I need a title. I want to call out (Miguel) Berchelt and get that WBC belt.”

“Don’t forget about me. I’m here. I ain’t going nowhere. I’m a warrior, baby. I come to fight. I put on good fights. The fans see me and appreciate me. I come out every night and do it for them.”

Berlanga (12-0, 12 KOs) was never threatened. Trenel barely threw a punch. Berlanga used a nice up-and-down attack, knocking down Trenel once, before referee Benjy Esteves Jr. mercifully ended it at 2:24 of the first. It was the first time Trenel had been stopped.

Top Rank now needs to think about matching Berlanga with more challenging opponents. The longest the 22-year-old from New York, known as “The Chosen One,” has gone is 162 seconds. He went 144 on Saturday night. 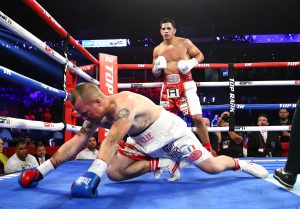 Edgar Berlanga made easy work of Greg Trenel, stopping his 12th-straight opponent in the first round. Photo by Mikey Williams/Top Rank.

“We went over the tape in the gym,” Berlanga said. “It’s just repetition. We go over the same things, and each time we fight, we execute. He was a tough opponent. He took a good shot. He didn’t go down. He didn’t want to go down.

“I want to go to the second round. It’s boxing. You can’t always have what you want. Eventually, I’m going to go those rounds when the competition steps up.

“I felt the love from the crowd and my friend Fat Joe walked me to the ring. It was a great night. I’m proud to represent my Puerto Rican people.” 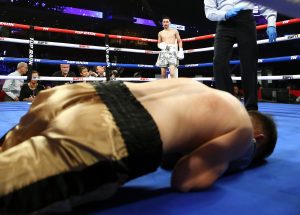 A Jeremy Adorno left to the body dropped Fernando Robles at 2:01 of the third. Photo by Mikey Williams/Top Rank

In the first fight of the night, 18-year-old southpaw Jeremy Adorno showed poise beyond his age in dispensing Fernando Robles (2-2) at 2:01 of the third round. A super bantamweight, Adorno (2-0, 1 KO) used a left to the body that dropped Robles and kept him down for the 10 count.

Donald Smith, a 5-foot-11 Philadelphia featherweight, won a six-round decision over Raheem Abdullah (3-3). Smith (10-0, 6 KOs) did have his troubles, getting rocked by the 5-5 Abdullah.

Philly heavyweight Sonny Conto has some talent, though it may take some time before that completely surfaces. Guillermo Del Rio (2-3-1, 2 KOs) was yet another victim served up to Conto (4-0, 3 KOs). Del Rio gets points for punching back, but Conto, being patient, whittled down the 225-pound jiggling Texan, with brutal body shots. 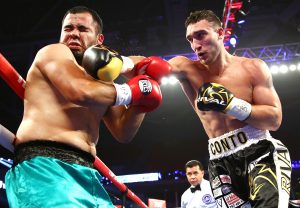 Finally, the gutsy Del Rio couldn’t take it, getting knocked down in the fourth of Conto’s first decision victory.

“You can’t load up on every punch in there,” Conto said. “This fight showed me how to be patient and work on the things that are going to get me to the next level.

“I’m used to being in there with guys who don’t go anywhere. I’ve sparred great fighters like Tyson Fury. That prepared me for a fight like this.”

In one of the best matchups of the card, featuring a pair of undefeated welterweights, Philly’s Paul Kroll and Trenton’s Shinard Bunch went hard at each other in what seemed like a fight for their future.

Kroll, who came in over the weight, at 147.9 pounds, had his knees buckled in the third, but came back to close the round strong with a right to the jaw. In the fourth, Kroll closed the gap on the taller Bunch and used a crisp body attack to slow down the jittery Bunch.

In the fifth, Bunch popped a combination off of Kroll’s head. Bunch snapped another right off of Kroll’s. And while Kroll seemed to stir the oohs and aahs from the partisan Philly crowd, it was Bunch that landed the more effective punches.

Kroll, who was clearly the more aggressive fighter, opened the sixth going back to the body. His attack worked, but each time he winds up, Kroll’s come from wide angles. Kroll nailed Bunch with a right to the check in the sixth, while Bunch did little to counter him.