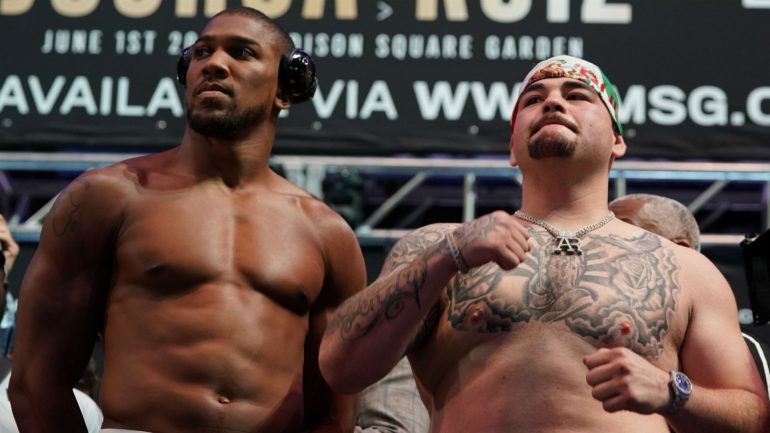 Negotiations went back and forth for a suitable locale.

Andy Ruiz Jr. and his team threw in Los Angeles, Las Vegas and Mexico. Anthony Joshua and his retinue countered with New York, England and Wales. Nobody could agree, and the last we heard was that the heavyweight rematch would be hosted on neutral ground.

Well, that’s exactly what we got.

Ruiz will defend his IBF, WBA and WBO titles against Joshua in Diriyah, Saudi Arabia on Dec. 7. Sources say the brain trust behind this event will put up $100 million – beating out main rival Dubai – to stage one of the biggest glamour division showdowns in years.

On June 1, Ruiz, who is rated No. 3 by The Ring at heavyweight, got off the canvas to floor Joshua four times en route to a sensational seventh-round stoppage. It was a colossal upset, but the previously unbeaten Brit had a rematch clause in place and he has elected to exercise it immediately.

News that the rematch is heading to the middle east is likely to be met with high levels of derision from fight fans. However, money makes the world go round and the winning bid is a clear indication of just how big this return fight is.

Will Ruiz repeat his epic triumph? Will Joshua gain revenge? There’s a long time to wait, but we have a date and we have a location.

The bout will be officially announced soon.

The bout will be carried by DAZN in the U.S. and Sky Sports Box Office in the U.K.