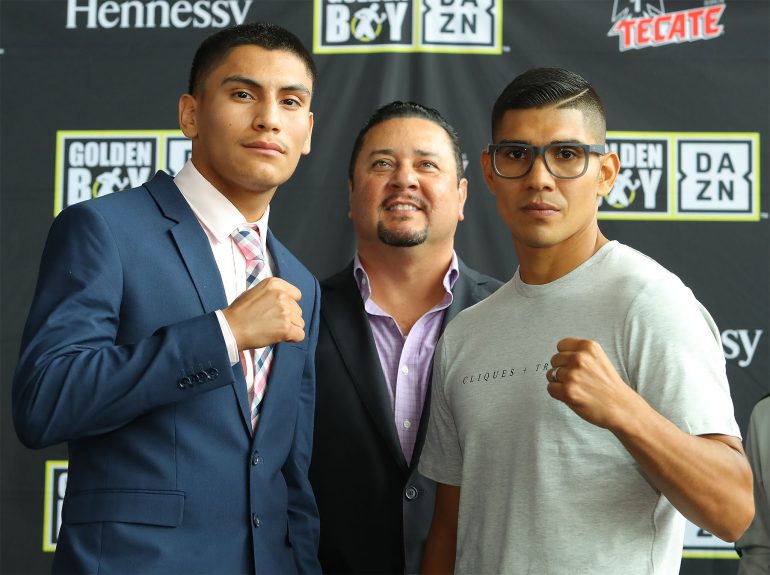 The deck is stacked against Antonio Orozco leading into his welterweight clash with Vergil Ortiz on Saturday.

Despite having more than twice as many fights as his opponent, Orozco is not expected to win against an authentic knockout artist, who also happens to be one of the finest prospects in the world today. However, Orozco, a former world title challenger, is not letting anything faze him and is dialed in on pulling off a career-best victory.

The eagerly anticipated 12-round bout takes place at The Theatre in Grand Prairie, Texas and will be streamed live on DAZN (9:00 p.m. ET/ 6:00 p.m. PT)

Orozco (28-1, 17 knockouts), who lives and trains in San Diego, was floored and outpointed by Jose Ramirez in a WBC junior welterweight title bout in September. Undeterred, he got himself back in the win column in March, when he defeated veteran Jose Luis Rodriguez by unanimous decision.

The 31-year-old jumped at the opportunity to face Ortiz (13-0, 13 KOs) when Golden Boy Promotions reached out to him.

“When the fight was presented, I thought it would be one hell of a fight because of the type of fighter I am and the type of fighter Vergil Ortiz is,” said Orozco earlier this week. “Because he is young, you can see that Vergil is a fighter that wants to put on a show. That’s a big danger in any fight and it’s something you have to look out for. Vergil is just that type of fighter; very exciting (and) aggressive.

“I know that Vergil has never been past the fifth round, but you can’t just rely on that. We have to make our fight. These are just statistics; facts that are put out there. Once we’re up in the ring, the scenarios can change.”

After campaigning for most of his career as a 140-pounder, Orozco moved up to welterweight and scored a third-round knockout of Mauricio Herrera in May. He believes there are more opportunities at 147 pounds.

“For this fight, I’ll be fighting (at welterweight),” said Orozco, who is managed by Frank Espinoza. “I think there’s a lot more opportunities at 147 pounds. We’re going to work for a victory, and we’re going to sit down and see what our options are after. With a big fight, plenty of doors can open, especially since it’s against a fighter of this caliber.”

A victory could indeed put Orozco back in the world title hunt. It will not be easy, however, as Vegas sporting books and gambling websites have listed Ortiz as a heavy favorite. Not to mention the fact that Orozco will be fighting in Ortiz’s hometown of Grand Prairie, which is a suburb of Dallas.

A pro-Ortiz crowd will be expecting to see Orozco get knocked out Saturday night, but it will not be the first time the underdog has faced such a situation. Orozco took on Ramirez in Fresno, not far from Ramirez’s hometown of Avenal.

“Going into somebody’s backyard is no easy task,” Orozco admitted. “We just have to be prepared to the best of our abilities and expect a very strong fighter that night. After the Ramirez fight, I think I found out exactly what I’m about. I faced a fighter in Ramirez, and I pushed myself until the fight was finished. I think that says a lot about myself. We’re going to bring that same passion Saturday night.”

Orozco believes he is a much-better fighter than the one who faced Ramirez almost a year ago. Whether that is enough to defeat Ortiz remains to be seen, but Orozco is willing to give it his all and give the fans their money’s worth.

“This is a fight where we’re looking to control the distance and take it into the later rounds,” he said. “Every fight is a learning experience, not just my loss to Jose Ramirez, but previous fights as well. There’s always something to learn, but obviously staying composed is very important.”

“Come Saturday, the fans can expect an explosive bout. This fight sells itself. The styles that myself and Ortiz have will give the fans what they want, which is fireworks.”