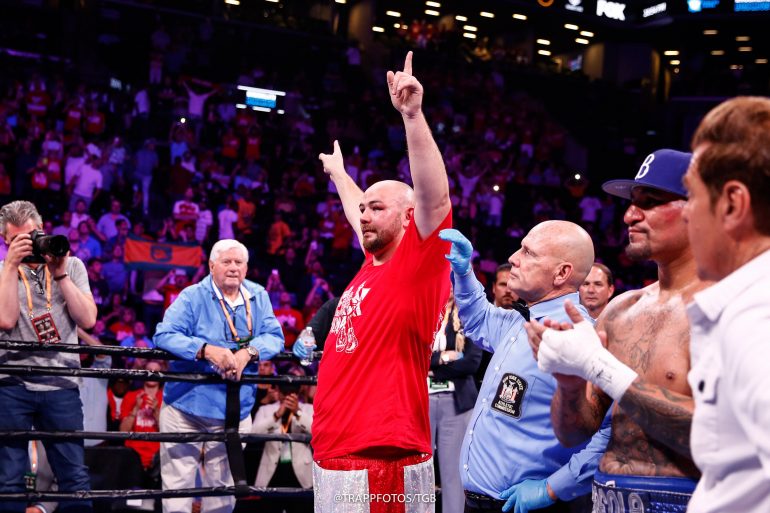 NEW YORK — About 45 minutes after the final bell, a partitioned media room awaited for the arrival of the main event fighters for the post fight press conference. Chris Arreola, who had thrown more punches than any other heavyweight in a bout tracked by Compubox, was seen leaving in an ambulance to tend to his broken left hand. Arreola’s trainer Joe Goossen offered a thumbs up to the couple of reporters who saw them off as the ambulance pulled away.

That left Adam Kownacki, who despite absorbing plenty of those punches, was only being held up in his dressing room by the state commission, who needed him to provide a sample for their post fight testing.

“I feel good. I drank too much water because I had to take a urine test for this fight, that sucked,” said Kownacki (20-0, 15 knockouts), when asked how he felt. Other than some swelling on his left eye – the product of Arreola’s right hands landing flush all night – he looked like any other fighter would after a hard, twelve round win on points.

The crowd was already hot from an upset win by Jean Pascal over Marcus Browne in the bout before, but the reported 8,790 in attendance had mostly come to see Kownacki, the Lomza, Poland native who was raised in the nearby Polish enclave of Greenpoint, Brooklyn. The atmosphere was reminiscent of the pinnacle of Tomasz Adamek’s run at the Prudential Center in Newark a decade ago, when the two division champion underlined how potent a draw Polish fighters could be in the right venue.

Kownacki’s trainer Keith Trimble wished he hadn’t taken as many shots, but saw some signs that the 30 year old was thinking in the ring and showing more wrinkles than he had in previous fights, when he walked through most of his opponents.

“He can actually box. I know you probably don’t think so because the way he likes to fight. He can box, he can throw his jabs, he can keep his distance. It was either the 8th or 9th round, he came out jabbing, hit him with a nice 1-1-2, hurt him. I sat there and looked at our outman Danny Milano and said ‘see, this is easy,’” lamented Trimble.

“He doesn’t have to make it so harder on himself. But you know,” he said, before knocking on his head. “Thick skull, he’s gonna do it.”

Trimble suggested that it was pressure from the media to have an exciting fight every time out that makes Kownacki take as much punishment as he does.

“Honestly it’s cool that you have a record for most punches, but my opinion, you don’t need to make all those punches,” said Trimble. “I would rather you make your punches count a little more instead of sitting there and going toe to toe slugging it out.”

The fight set a new record for punches landed and thrown in a heavyweight fight, surpassing a pair of performances from two decades ago by David Tua, another prospect coming up who also seemed to ignore right hands bouncing off his skull.

Kownacki came in at 266 pounds, heavier than his previous highs, which were a little too high to begin with. Asked about it, Kownacki defended his conditioning, bringing up the punch numbers he produced earlier in the evening, before admitting that dropping a few pounds could benefit him.

“I just threw a thousand punches, I think I’m in pretty good shape,” said Kownacki, who is rated in the top 10 by the WBC, WBA and IBF, plus no. 9 by The Ring.

After the fight, Kownacki didn’t put WBC heavyweight titleholder Deontay Wilder on the spot with a call out, despite Wilder being at ringside commentating for the PBC on Fox broadcast. That’s probably because Wilder already has a pair of rematches against Luis Ortiz and Tyson Fury in the pipeline, but Kownacki’s team wants their shot at him. Eventually.

“I would think probably two more of these types of fights, hopefully a little bit easier. I may have to do a little bit better matchmaking for him,” said manager Keith Connolly.

“A fight with Deontay Wilder in this building, I don’t think there’d be one seat that wasn’t sold. So I would say in the next year he’ll be fighting Deontay Wilder for the title.”

Taking a right hand from a 38 year old Chris Arreola who is leaning towards retirement is a different proposition from doing the same against Wilder, one of the heaviest punchers in modern heavyweight history. How would he avoid those shots?

“I’m gonna keep working on it. I was working on it in this fight, I didn’t show it as much as I should have,” said Kownacki.

Connolly interjected: “He’ll take the right hand, he’ll walk through them and knock him out.