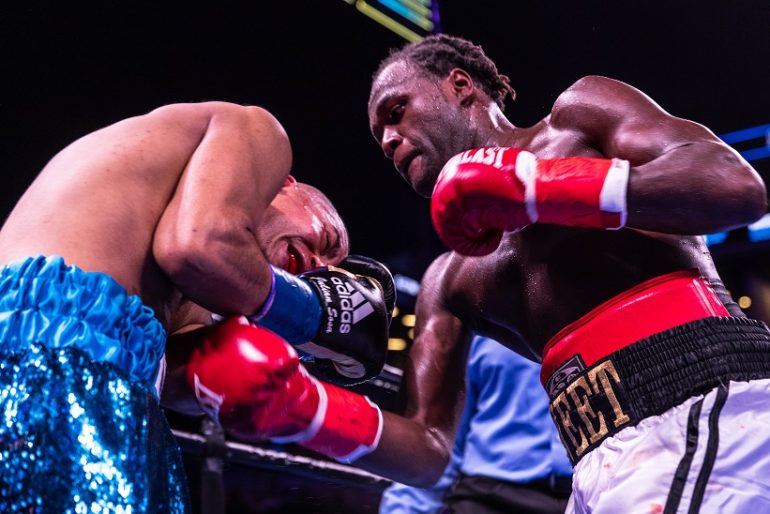 NEW YORK – In a minor upset, Brian Jones stopped the very popular Julian Sosa at 2:28 of the fifth-round on the undercard of the Adam Kownacki-Chris Arreola heavyweight main event at Barclays Center in Brooklyn on Saturday night.

Jones (14-10, 8 knockouts) dropped Sosa, making his fifth appearance at Barclays Center, in the fourth with a three-punch combination upstairs, bloodying Sosa’s nose. Sosa, from the nearby Sunset Park section of Brooklyn, beat the count, but his body language suggested he didn’t have much left. Jones came with a vicious combination raking Sosa’s body as the round ended.

Noticeable absent from Sosa’s corner was his father and trainer, Aureliano. Instead, the instructions were coming from unbeaten stablemate Chris Colbert, who is 22 years old. Sosa (13-1-1, 5 KOs) came out for the fifth unprepared for the barrage that came from Jones, who landed a body shot forcing Sosa to kneel over and touch the canvas with his glove, which resulted in another knockdown.

Sosa threw one more left hook to try to turn the tide before Jones took over and pelted Sosa with another big combination sending him to the ropes and unable to respond forcing referee Earl Brown to step in and stop the bout signaling the first defeat in the 23-year-old’s pro career.

Howard proceeded to land four more clean shots, punctuated with a clean right that dropped Negron near his own corner and almost out of the ring. Referee Shada Murdaugh waived the bout off immediately as ringside physicians rushed the ring.

Negron (20-3, 16 KOs) was laying on his back for five minutes before being allowed to sit up and eventually leave the ring under his own strength. This was the second-straight knockout loss for Negron at Barclays Center, after being knocked out cold by Dominick Breazeale last December.

Marsellos Wilder (5-1, 2 KOs) averted near disaster by defeating Nicoy Clarke (2-4) by a four-round unanimous decision. The official scores from ringside were 40-36 (twice) and 39-37.

With his brother Deontay yelling instructions from the Fox broadcasting table ringside, the younger Wilder returned to the scene of his stunning knockdown loss to William Deets earlier this year in the same building. This time it was in the third round that the 30-year-old Marsellos Wilder was caught with a looping right hand, sending him stumbling into the ropes, hanging on for dear life. Clarke just didn’t have enough in the tank to attack Wilder and put him away allowing him enough time to recover. Wilder fought back in the fourth to regain control and escape with the victory.

Junior middleweight prospect and New Jersey native Kestna Davis improved to 4-0 with a four-round unanimous decision win over the winless Jaime Meza (0-3). This was Davis’ first bout since defeating Miguel Miguel Ray in October of 2017.

The 27-year-old Breedy found success keeping Allen off balance with his sharp jab.

In the opening bout of the evening, welterweight prospect and New York City native Arnold Gonzalez (2-0) defeated Jeremiah De Los Santos (0-4) by unanimous decision of 40-36 on all three cards. Gonzalez, 24, was one of Manny Pacquiao’s sparring partners for the Keith Thurman bout and is coming off a unanimous decision victory over Stacey Anderson this past February in Rhode Island in his pro debut.