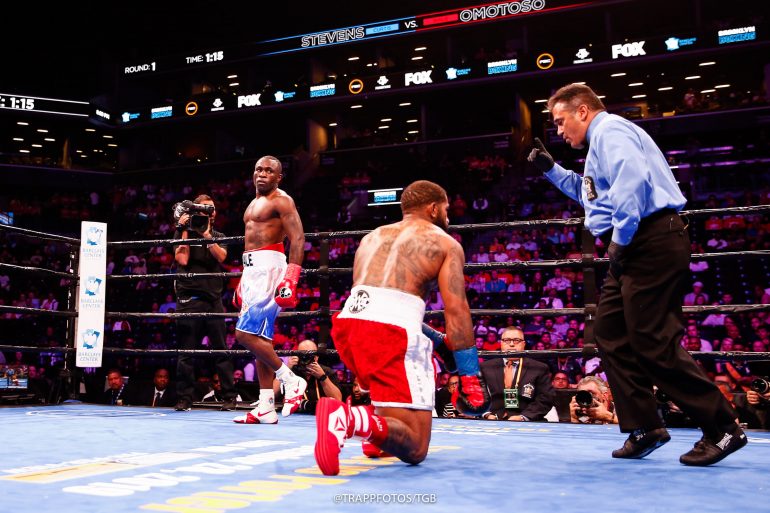 Curtis Stevens came to the Barclays Center hoping that a new weight class would translate to a new start after stepping down to 154 pounds. Wale Omotoso had the same thing in mind, and was looking for a clean slate after losing three of his last five fights.

It was Omotoso (28-4, 22 knockouts) who got his way, dropping the hard-hitting fan favorite three times en route to a third round technical knockout in the PBC on Fox televised opener of the Adam Kownacki-Chris Arreola card.

The fight was stopped after a right hand from the Nigerian gatekeeper put Stevens (30-7, 22 KOs) down in a neutral corner. Stevens beat the count but was unsteady on his feet, prompting Johnny Callas to stop the bout at the 1:28 mark.

“I was just letting my hands go. On the second knockdown my confidence grew. I was glad to get the victory by knockout,” said Omotoso.

From the opening bell Stevens, who turned pro as a light heavyweight and worked his way down over the past decade, looked flat at the weight. Omotoso scored the first knockdown midway through the first, catching Stevens with a right hand on the ear that didn’t look particularly devastating.

Omotoso continued boxing and moving in the second, catching Stevens with counters as he plowed straight forward. The second knockdown, this time on a jab, looked so innocuous that the crowd in Stevens’ home borough of Brooklyn didn’t know how to react.

Sensing the need for a big turnaround, Stevens came out firing away with the sort of bombs that had defined him as a wild card early in his career. Omotoso looked beleaguered but maintained his composure. Then, with Stevens seemingly having shot his load, Omotoso landed the punch that finalized matters.

And that'll do it! After 3 knockdowns by Omotoso in 3 rounds, the ref refuses to let Stevens continue. #PBConFOX pic.twitter.com/uxdlz4fNCM

Stevens, 34, was fighting for the first time in over a year, and just the second time since March of 2017, when he was knocked out in three rounds in frightening fashion by David Lemieux. The loss was his fourth by stoppage, likely signaling the end of his career as a contender.

“He hit me with an overhand right in the first round that knocked my equilibrium. But that didn’t really affect me too much. I wasn’t stepping enough into my punches, I was reaching. I got caught when I was reaching,” said Stevens.

“I was okay but the referee has to do his job. I was down three times so I know he was looking out for my best interests.”

Omotoso, also 34, now has some momentum behind him after moving up to 154 pounds after fighting most of his 13 year career as a welterweight.

“I have to talk to my team about what’s next. I’m thankful for this opportunity. I’m so happy to have this win. Give me anybody next, I’m ready,” said Omotoso.

The Stevens-Omotoso fight was originally slated for the untelevised undercard but was bumped up after Andre Berto withdrew from his fight due to an injury.

Liam Williams bids to be 13th world champion from Wales