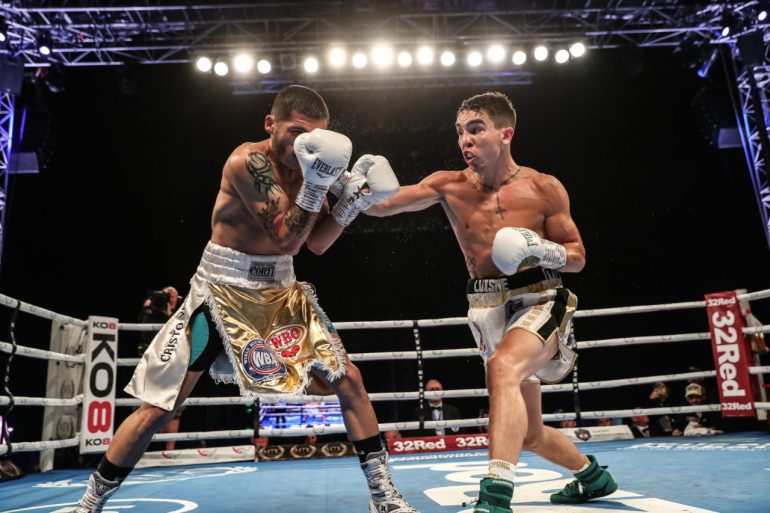 The 10,000 seat venue Conlan was fighting in was built into the side of a hill and had Ruiz been given the opportunity, he would probably have ran down it. The Argentinian displayed little to no offense and simply bounced around the ring looking to draw careless leads from his opponent. There weren’t any careless leads. Conlan, a gold medalist at the 2015 World Championships and a bronze medalist at the 2016 Olympics in Rio, has been there and done it, and he dominated the fight with an educated jab, the odd piece of switch-hitting and distance control.

Just when a decision victory looked assured, Conlan dropped Ruiz with a sharp two-punch combination to the mid-section in the ninth. The visitor was badly winded and stayed down for as long as he could before rising slowly. That was blood to a shark. Conlan attacked furiously and smashed home a few more sickening body blows, which prompted Ruiz’s corner to throw in the towel. Referee Michael Alexander accepted their surrender.

“I’ve been under the lights since my (professional) debut and I haven’t always lived up to expectations, but tonight I think I did,” said Conlan during his post-fight interview with BT Sport.

“Who’s to say we can’t get a world title fight here next year? I want any of (the featherweight world titleholders). With this atmosphere, with this crowd, with this support, I’ll fight anyone. And this is only the start. I believe this is the first time I’ve performed at a proper level, but I’ve got more levels to go, and I believe I can beat any of them.”

Conlan (12-0, 7 knockouts) has a top 10 ranking with three of the four governing bodies at 126 pounds. Despite having only 12 professional starts, his enormous amateur pedigree and international experience means that he is infinitely more seasoned than that number suggests. Conlan has also been working with acclaimed coach Adam Booth over the last 18 months and that pairing is definitely bearing fruit. 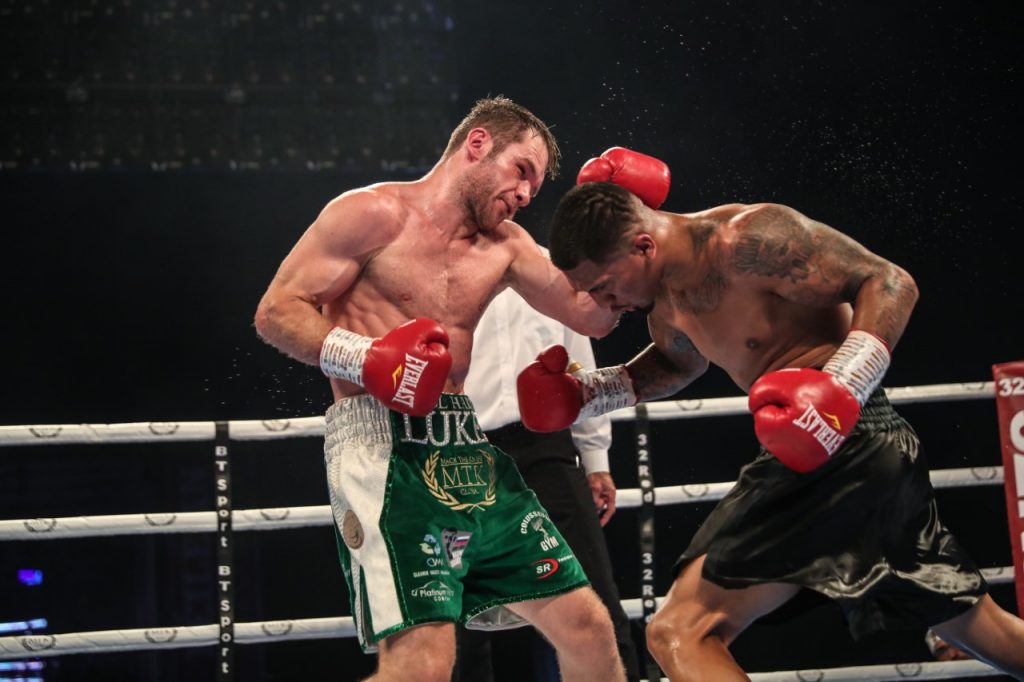 Keeler (left) on the attack against Arias. Photo by Karen Priestley

Dublin’s Luke Keeler scored an impressive 10-round decision over Luis Arias at middleweight. Referee Steve Gray was the sole judge of the contest and scored 96-91 in favor of the home fighter.

Keeler dropped Arias in the opening round with a left hook and followed up well. However, his success soon dwindled and Arias, whose only other defeat came against former IBF titleholder Danny Jacobs, managed to secure a foothold in the fight. Keeler (17-2-1, 5 KOs) was deducted a point for rabbit punching in the fifth, which effectively evened up the scoring for the early knockdown. But the 32-year-old technician grinded out a tough win by producing the better work down the stretch, punctuated by another knockdown in the ninth. Arias falls to 18-2-1 (9 KOs).

Jenkins, who was floored in the sixth round by a body shot, sustained horrible cuts around both eyes as a result of two accidental head clashes. Referee Howard Foster observed the lacerations on more than one occasion before halting the action in the ninth. Jenkins, however, had built up enough of a lead early to secure victory by an 86-85 margin all three cards. Gallagher falls to 16-6 (10 KOs) but deserves an immediate rematch.