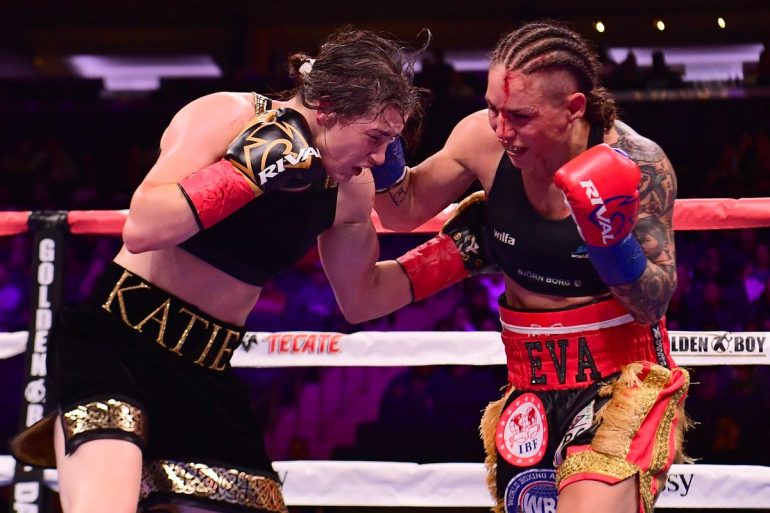 Eva Wahlstrom may have come up short against Katie Taylor in her last bout, but she still holds a world title belt.

Wahlstrom will make the fifth defense of her WBC junior lightweight title against Ronica Jeffrey tonight at the Thomas & Mack Center in Las Vegas. The 10-round bout will stream live on UFC Fight Pass (10 p.m. ET/ 7 p.m. PT).

The 38-year-old Wahlstrom, who resides in Helsinki, Finland, moved up in weight to challenge lightweight champion Katie Taylor on Dec. 15, a bout she lost by unanimous decision.

Jeffrey has not fought since Dec. 7, when she defeated Edina Kiss by unanimous decision. The Brooklyn native has won her last four bouts since losing a split decision to Carla Torres in May 2014.

Guy Taylor, the matchmaker for Roy Jones Jr. Promotions, believes Friday’s clash between Wahlstrom and Jeffrey will be an evenly-matched fight.

“Wahlstrom-Jeffrey should be a very fast-paced and entertaining bout,” Taylor told The Ring Thursday morning. “Eva has been the WBC world champion since 2015, while Ronica has been a world-ranked contender since 2011. Wahlstrom and Jeffrey (are) definitely two of the best female fighters in the world at 130 pounds.”

In the co-feature, junior middleweight John Vera will square off against Ravshan Hudaynazarov in a six-round bout.

This is a crossroads clash between two fighters who are coming off a loss and cannot afford back-to-back defeats.

Vera (18-1, 11 KOs), who resides in Fort Worth, Texas, will be moving up to 160 pounds after losing his last bout by unanimous decision to junior middleweight Michel Soro on Mar. 24 of last year.

“Vera is coming back at a perfect time and in a perfect weight class (middleweight) for him,” said Taylor. “After Vera’s defeat to Soro, we all knew it was a matter of time before John made the move up to the middleweight division. I expect to see a rejuvenated John Vera come Friday night in Las Vegas.”

“UFC Fight Pass will be very pleased with Vera’s entertaining and fan-friendly style.”

The 35-year-old Hudaynazarov (17-1, 13 KOs), who is originally from Uzbekistan and now resides in Las Vegas, has also been very inactive. He has not fought since losing by knockout to Ronald Cruz in February 2018, and that was his first outing in four years,

Junior bantamweight Trevor Covington of nearby Henderson will make his pro debut against Ming Freeman (1-3-1, 1 KO) in a four-round bout.