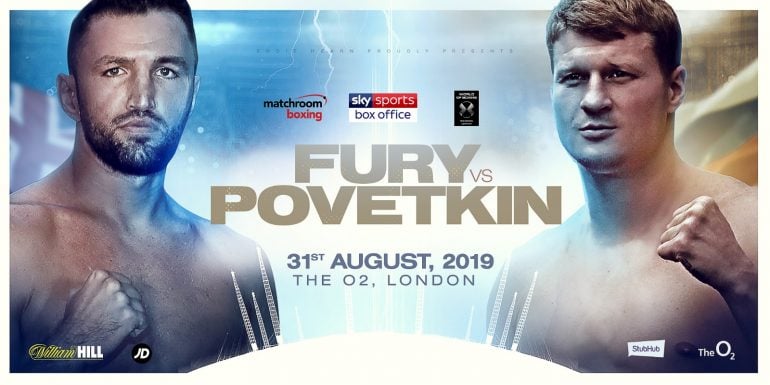 Hughie Fury will take on Alexander Povetkin in an intriguing heavyweight attraction at the O2 in London on August 31. The bout will support the lightweight championship showdown between Vasiliy Lomachenko and Luke Campbell, which will be televised on ESPN in the U.S. and Sky Sports Box Office in the U.K.

In 2017, Fury (23-2, 13 KOs) dropped a controversial majority decision to then-WBO titleholder Joseph Parker. The athletic Englishman is coming off a brace of victories over Chris Norrad and Sam Peter, which followed on from a unanimous decision loss to Bulgaria’s Kubrat Pulev in October.

Povetkin is likely to offer him a stern test.

“I’m over the moon with this news,” said the 24-year-old Fury. “I can’t wait. These are the kind of fights I want to be in. Matchroom can get me these big names, and I’m just really looking forward to it. Povetkin is a dangerous man. He’s not been where he’s been for nothing. It’s a very serious fight, but I’m confident of getting the win on the night.

“This fight here represents a massive opportunity. As soon as it was suggested, I said ‘yes.’ Povetkin is a completely different level to my last fight and I believe his style will compliment mine.”

The 39-year-old Povetkin (34-2, 24 KOs) has been in with the best. In October 2013, the Russian boxer-puncher was outpointed by then-champion Wladimir Klitschko, and in September 2018 he fell short in a game effort against Anthony Joshua, who stopped him in seven rounds. However, the canny veteran is well-known among U.K. fight fans, who watched his devastating sixth-round knockout of Liverpool’s David Price in March 2018.

“Hughie Fury is a young, strong and challenging boxer for me to face,” said Povetkin. “I am glad this fight will take place in the United Kingdom where people really love their boxing. I am anticipating an exciting fight and I look forward to returning to London next month.”