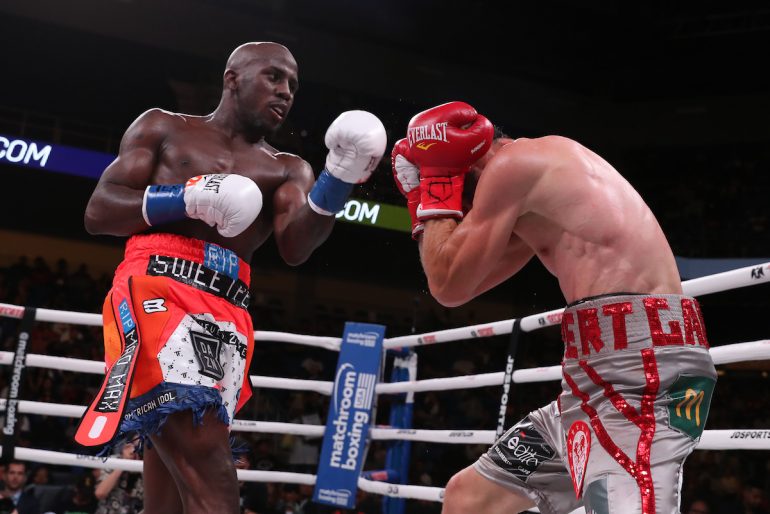 The scores were 116-111 on two cards and 119-108 on the third, all to the Philadelphia-based boxer. Since defeating Billy Dib to the win the vacant IBF title last August, Farmer has now made four defenses.

Frenois had not lost since dropping a unanimous decision to Italy’s Denis Boschiero in September of 2013, a string of 16 fights.

Farmer was the more polished of the two southpaw fighters, utilizing his quickness to beat Frenois to the punch and land the more telling punches from the opening bell.

Frenois, who fought to a split decision draw against Jono Carroll in his last bout on Dec. 8, let his hands go more during the third round, but Farmer swung the momentum his way in round four by mixing his attack to the head and body during the following round.

Farmer stood in the pocket with Frenois, sitting down on his punches, but none of them seem to phase Frenois.

In round 10, Farmer was deducted a point from referee Mark Calo-oy for landing a low blow on Frenois. Calo-oy had already warned Farmer in round six when a Farmer punch strayed below Frenois’ belt line.

Sensing he was down in the fight, Frenois let his hands go during the final two rounds. He did connect with more frequency, especially overhand and counter left hands to the head of Farmer.

“I mean I came out here and I did what I had to do,” said Farmer after the fight. “My hand is always messed up. I come in here and I keep winning. I did an excellent 12 rounds. I came in and fought all 12 rounds. I don’t care about the crowd, I came in here, I fight, I win, get my money, and I go back to my family. You love me or hate me. I think it was speed and my IQ that won me the fight.”

Farmer has options as he could fight next. There is a possible grudge match against contender Joseph ‘JoJo’ Diaz or a unification fight with WBA titleholder Gervonta Davis, who stopped Ricardo Nunez Saturday night in his hometown of Baltimore.

Farmer says he wants a fight with Davis, but could fight Diaz if a Davis fight cannot be made.

“It can be made, he says he wants me. Gervonta says he wants Tevin, then (Leonard) Ellerbe says something else. I’m moving forward from that fight. If I can’t get that fight, give me JoJo Diaz.”

With the victory, Williams improves to 19-0 (6 KOs) and won a regional title belt.

From the opening bell, Vicente walked Williams down and attempted to keep the fight in the center of the ring. The tactic worked as Vicente connected to the head and body of Williams. As the bout progressed, the southpaw Williams’ ring generalship took over, connecting several times to the head and body of Vicente, who began to get frustrated from the amount of punches Williams was able to land.

Vicente pressed the action during the final two rounds of the fight, but Williams landed the more-telling blows during several exchanges.

“B minus, C,” said Williams when asked about his performance. “I could have done better. Usually having fun means you did a good job. He could see me having fun so he was pushing my head low and hitting me low.”

Vicente, who is originally from the Dominican Republic and now resides in Miami, Florida, drops to 35-4-2 (27 KOs).