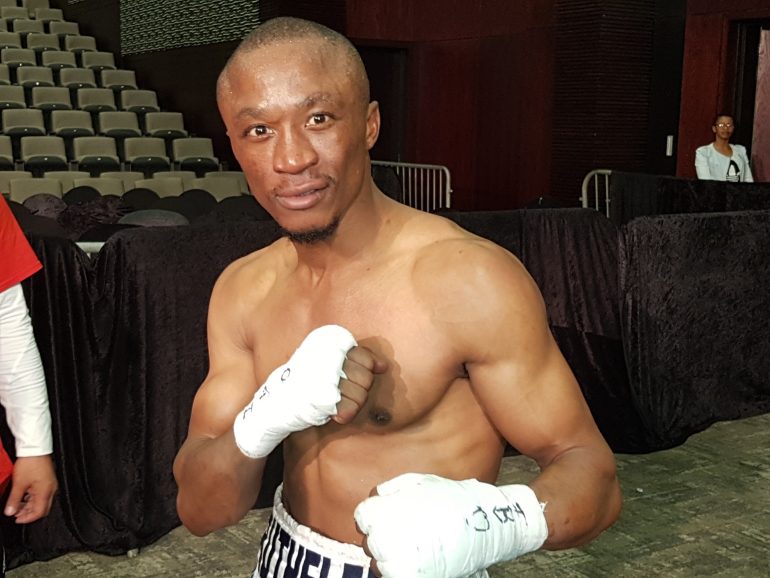 Gideon Buthelezi has had a long career of ups and downs. There was a win way back in 2011 over former two weight and Ring world champion, Hekkie Budler and also some crushing defeats, but he is a man who just won’t go away. He just put an exclamation point on the latter with an impressive win over Adrian Jimenez at the East London International Convention Centre in a stacked card of a weekend commemorating our late president Nelson Mandela.

With only four career knockouts everyone expected his 12 rounder against the Mexican visitor to go the distance but boxing has always had a way to deliver a surprise package on your door.

The visitor came out swinging with hard rights and wide left hooks but Buthelezi kept his cool under fire and nailed Jimenez with a left hook from his southpaw stance that buckled the legs of his opponent. That was followed up by a jarring left uppercut and somewhat out of character, he went for the kill.

A followup combination pinned Jimenez on the ropes, turned his eyes inside out and made him crumble to the canvass in a heap, prompting referee Deon Dwarte to wave the fight off without a count in the opening round.

The win brought Buthelezi’s winning streak to eight in unexpected fashion and built his case for another shot at a major belt (he was knocked out in two in a previous challenge of Adrian Hernandez for the WBC junior flyweight belt back in 2011).

Is he the best 115 pounder in South Africa? On paper, yes, but there are others that would like to put forth a strong argument.

One of them (along with Athenkosi Dumezweni) is slickster Yanga “Showtime” Sigqibo, who fought Filipino, Joseph Ambo, in the main supporting bout.

Sigqibo, like Buthelezi before his last outing, is not known for knocking down walls, but he is a fine boxer with speed of hand and foot to match. 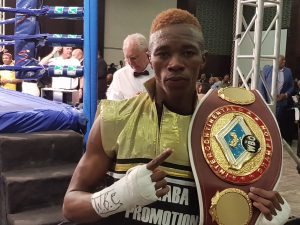 Always on his toes, moving this way and that, he gave a fine display of jabbing all night long. The left stick hit Ambo to the head and then to the body. He also mixed the power shots in when he had the chance. A straight right every now and then, a uppercut-left hook combination to the head, coupled with a whiplash left hook to the body kept adding to his jab and move approach.

In the fourth he scored a knockdown courtesy of a left hook that brought the partisan crowd to their feet.

Ambo was tough as nails though, got up, weathered the storm and just kept pressing forward. He bulled his way in, attacking mostly with a short overhand right that found a home on the odd occasion but Sigqibo was in cruise control, putting on a boxing clinic.

In the eighth, Sigqibo rammed home a series of straight rights to the body punctuated with a jolting right uppercut to the head that got the crowd on their feet. Limited as Ambo was, he had that warrior spirit and wasn’t going anywhere.

In the last round the Filipino pressed as hard as he could but just couldn’t match the South African speedster. It came as no surprise when he prevailed with wide identical scores of 120-107.

A much anticipated local rivalry between comebacking former IBF strawweight kingpin, Nkosinathi Joyi and Sipamandla Baleni ended up in disappointment after a promising start.

The shorter Baleni came out fast in the first round pressing the veteran former world champion and possibly shading the round.

Joyi started to find his rhythm in the second stanza, landing the more telling blows to the head and body.

All that was spoiled in the third, when Baleni half tackled, half threw his opponent to the ground that had both hitting the canvass. In the process, Joyi injured his shoulder and writhing in pain, was unable to continue.

The fight was declared a technical draw.

South African flyweight champion, Jackson Chauke, made a statement, dispatching challenger, Sihle Jelwana, inside of a round. He dumped Jelwana on the floor with a searing right uppercut. The challenger rose, mounted a desperate counter attack but got put down again by a right from the much more composed Chauke. He got back on his feet on spaghetti legs and the fight was wisely waved over.

In a junior middleweight bout, South Arican based Congolese prospect, Emmany “The General” Kalombo, stayed undefeated, scoring his twelfth knockout in a row in as many fights, but he had to work harder than ever before against another South African based fighter, Cristiano Ndombassy, from Angola.

In an absolute slugfest that stole the show from an action point of view, it was a battle of wills between the rangy Kalombo and always pressing forward Ndombassy.

When Kalombo established the distance with his jab, he landed thudding body shots and straight rights but every time he looked to be gaining the upper hand, Ndombassy nailed him with left hooks and the occasional right to keep him honest. Still, it was Kalombo who mostly forced his style on his opponent.

Ndombassy had his best round in the fifth, nailing Kalombo repeatedly when he tried to close the show, raising the possibility of an upset.

In the sixth, Kalombo stopped the outgoing tide when he backed Ndombassy to the ropes, opening him up with a flurry of body punches, before a thunderous straight right capped off with a left hook deposited  Ndombassey flat on his back in dramatic fashion.

Kalombo showed both raw power and vulnerablity and he is a must watch fighter. Ndombassy, who drops to 11-4, is a danger man for any youngster out there.

The card was presented by Ayanda Matiti of Xaba Promotions.