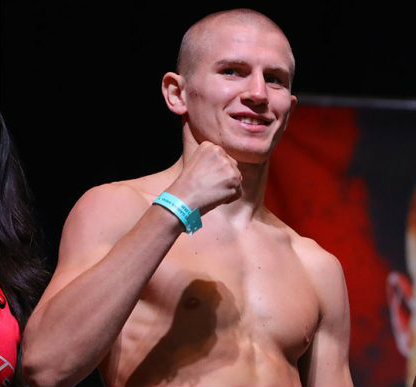 Unbeaten junior middleweight Serhii Bohachuk has stopped every opponent thus far in his young career. Could Sunday’s opponent Fernando Marin pull off the upset or at least go the distance against the blue-chip prospect?

Bohachuk will go for win and knockout number 15 when he faces Marin at The Avalon in Hollywood, California. The 10-round bout will stream live on 360Promotions.us (7 p.m. ET/ 4 p.m. PT).

The 24-year-old Bohachuk has become a fan favorite in Southern California with his aggressive style and improving skillset. Originally from the Ukraine, Bohachuk now lives and trains in Big Bear Lake, California.

In his last bout on May 19, which also took place at The Avalon, Bohachuk (14-0, 14 knockouts) stopped gatekeeper Freddy Hernandez in round five. Promoter Tom Loeffler offered praises, believing he has yet to his peak as a fighter.

“Whenever (trainer) Abel (Sanchez) gives a ringing endorsement, you listen,” Loeffler told The Ring Friday afternoon. “Bohachuk is almost similar to what Gennady Golovkin was at that stage. He’s a hard worker and a big puncher. Abel says he’s very dedicated and disciplined and you can see the results. Serhii has one-punch knockout power or wears him down with high work rate.

“Serhii has become one of my favorite fighters. As tall and wiry as he is. he has that Mexican style that Abel has implemented. He’s proven to have a great chin. He provides entertainment and he has great ring generalship and IQ. He’s trained alongside ‘GGG’ for the last several years. He goes to the body effectively and mixes his punches well.”

An impressive victory over Marin could put Bohachuk in line for a possible top-10 ranking or a step up in competition. Loeffler believes the ceiling is high for Bohachuk.

“Sunday will be Serhii’s first 10-round bout. We don’t want to rush him. He’s been in the ring with solid fighters in Freddy Hernandez and Cleotis ‘Mookie’ Pendarvis. If he comes out victorious, we’ll look for another 10-round bout later this year and the possibility to fight for a regional title belt so that he could get ranked.”

In his last bout on Mar. 28, the 31-year-old Marin (16-3-3, 12 KOs), who resides in Calvillo, Aguascalientes, Mexico, knocked out David Ochoa in the fourth round. Marin has won three of his last four bouts since losing back-to-back bouts to Mauricio Pintor and Juan Jose Velasco.

Also on the ‘Hollywood Fight Nights’ card, heavyweight Elvis Garcia (7-0, 5 KOs) will square off against Hugo Trujillo (4-1-1, 2 KOs) in a six-round bout.

In a clash of fighters who reside in the Los Angeles area, Alexander Enriquez (10-0-3, 1 KO) will square off against Ricardo Cuellar (5-3, 3 KOs) in a six-round junior featherweight bout.

Cruiserweight Marco Deckman (2-0, 2 KOs), who is originally from Germany and now lives and trains in Hollywood, will face Keith Barry (2-2, 2 KOs) in a four-round bout. Deckman is trained by Freddie Roach.

“We’re expecting the most fans at this venue for a ‘Hollywood Fight Night’ card,” said Loeffler. “There’s been an increase in demand. Marco Deckman sold a lot of tickets. We had to increase capacity for Sunday. It’s a great local show with a world-class feel.”