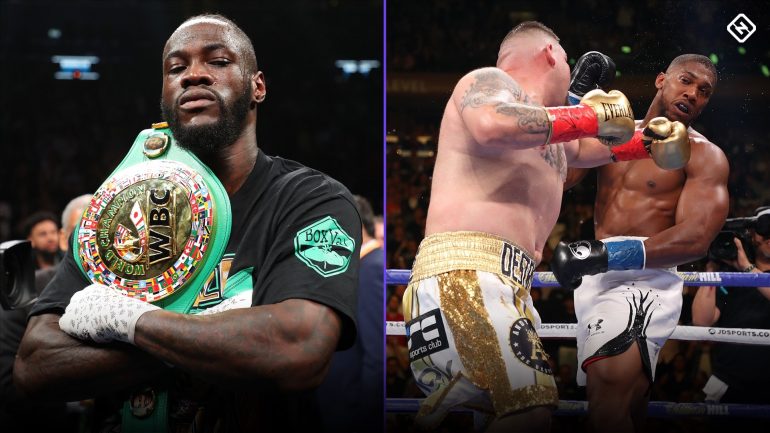 Speaking with TalkSport’s Jim White, “The Bronze Bomber” doubled down on his opinion that Joshua quit during his shocking seventh-round TKO loss to Ruiz at Madison Square Garden in New York City on June 1.

“I think Ruiz beat him too easily,” Wilder said. “I don’t think Joshua knows how he lost right now. In my opinion, Joshua quit.

“As a fighter looking in, understanding and reading the body language, he quit. I’m sad to say, he quit, though.”

Wilder proceeded to pinpoint three tell-all signs that Joshua did indeed quit, including him spitting out his mouthpiece following his fourth knockdown of the fight, blatantly ignoring the ref’s instructions to come forward and finally looking to his corner for guidance, which the WBC champ believes was a “sign like I’m looking for a way out.”

“I don’t think he’s a quitter,” Wilder continued, “but it’s going to sound contradicting, but he quit that night.”

“As a fighter reading the body language, I’m sad to say that he quit.”

“Ruiz beat him too easily, he doesn’t know how he lost that fight.”@BronzeBomber says Anthony Joshua quit in his big fight with Andy Ruiz Jr. pic.twitter.com/frz1pURAHr

MORE: The timeline that led to Ruiz’s historic upset of Joshua

Wilder’s latest comments follow him ripping Joshua with a series of tweets in the immediate aftermath of him losing to Ruiz.

He wasn’t a true champion. His whole career was consisted of lies, contradictions and gifts.
Facts and now we know who was running from who!!!!#TilThisDay

The worst thing you can do in life is Fucking Quit!!

Wilder and Ruiz were all smiles last Saturday night during the PBC on FOX pay-per-view broadcast for the Manny Pacquiao-Keith Thurman fight in Las Vegas.

Of course, the newly-crowned unified world heavyweight champion, Ruiz, and Joshua continue to iron out the details for their highly-anticipated rematch, where the former will look to prove that his upset wasn’t a fluke, while the latter seeks redemption.