For John Dato, spotlight on Manny Pacquiao undercard was a dream come true 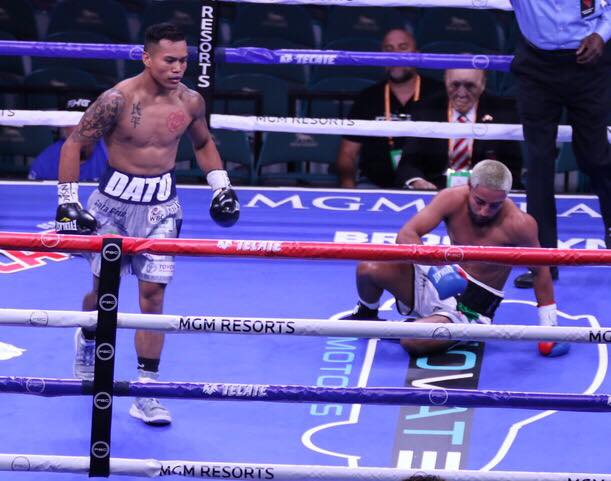 Hours before Manny Pacquiao would step into the ring at the MGM Grand, John Dato got to wear his cape. Though the vast majority of the 14,000+ in the house would show up much later, Dato had a little cheering squad of his own from the 200 or so tickets he sold from his home base in Santa Maria, Calif.

“It’s an amazing feeling when I walked outside the ring and I saw all these people,” said Dato (12-0-1, 8 knockouts), a Filipino born, America raised featherweight. “It was time to show these people who I am and that’s what I did. It was the best feeling ever.”

His opponent last Saturday in the curtain jerker was Juan Antonio Lopez (14-7, 6 KOs), a durable Mexican southpaw who had faced plenty of prospects but had never been stopped before. That changed in round five, when Dato bullied the more slender fighter to the ropes and planted a right hand to the ribs that left him unable to rise from his knee before the ten count.

“Even Leo Santa Cruz said congrats, ‘you’re the first guy to stop him, it’s a big statement,’” recalled Dato, who sparred with Joseph Diaz to get ready for the fight.

The victory was the culmination of a month-long process where Dato was able to run with the new WBA welterweight titleholder, and visited his home for lunch. Pacquiao didn’t speak much (“I told him that I’m fighting a lefty and he just nodded his head”) but the 25-year-old was able to absorb more with his eyes.

“His footwork, how he throws a lot of punches when he’s shadowboxing, I’ve been studying all of those,” said Dato.

For a prospect who was first turned on to the sport by watching Pacquiao’s clashes with Juan Manuel Marquez, it was an experience he couldn’t pass up.

Dato was raised in the Rissing section of Bangar, La Union, a rural beach area north of Manila. He moved to the United States at age 7, following his father, who had worked in Alaska for some time, and took to the world of scholastic sports.

In high school he competed in wrestling and track and field for four years, and football for three as a wide receiver. His pole vault personal record of 7’0 is still listed among the best results in Pioneer Valley High School history, but Dato says wrestling was his primary sport.

As graduation neared, Dato still wasn’t sure what he wanted to do with his life. School wasn’t his thing, so he considered the military. A friend told him about the Minami Boxing Club nearby, and one day he decided to give it a look.

He only had 12 amateur fights, which he says he won, before going professional in 2016. He traveled to Mexico for his debut, and has fought there three more times since. Despite not having a promoter he’s stayed busy, in part because of his ability to sell tickets. Having a high school athletic background and working full-time as a personal trainer has its benefits when it comes to moving tickets.

“I will still be working because I love what I do,” said Dato, who is trained by Raul Anguiano and Antonio Ojeda, and managed by Andres Moreno Rodriguez. “Right now it’s hard but in the long run it’ll get easier.”

His next fight is set for October 4 at the Chumash Casino in Santa Ynez, Calif., a headlining bout in his first eight round assignment.

“I don’t know where I’m at right now but I’m just going with the flow with what my manager and trainer want me to do,” Dato said of his progress. “I just have to be ready and stay active.”