Dillian Whyte is the latest fighter involved in a PEDs controversy 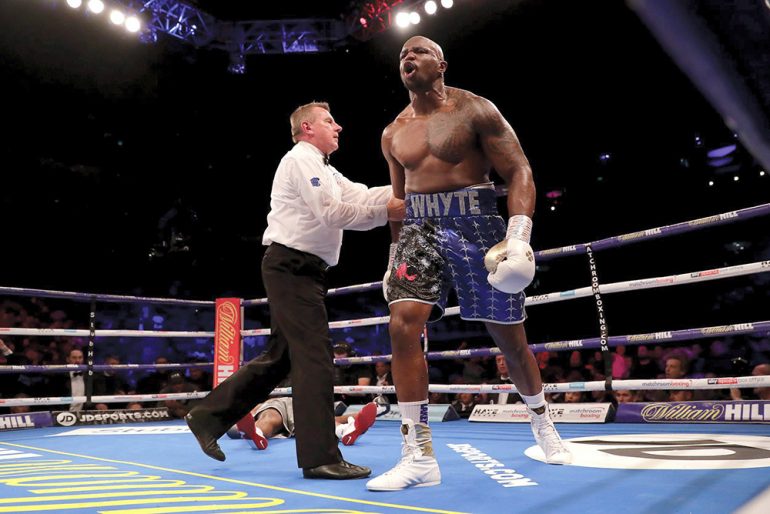 After Jarrell Miller got flagged for PED usage, setting a new record for combat sports with three banned substances (maybe), some fighters weighed in, and commented upon the kerfuffle.

Dillian Whyte (26-1, 18 knockouts), the British heavyweight, in fact, was one who went on the record. On April 29, the Jamaican-born hitter spoke to the UK Mirror, and shared that he thought loads of athletes were cheating with performance enhancers.

But, Whyte stated, many are doing it “legally,” by asking for and gaining “therapeutic use” exemptions. Meaning, they get a doctor’s note, and are thus allowed to use chemicals that are otherwise verboten, like synthetic testosterone.

“Look at it like this – there’s loads of fighters who are legally cheating,” Whyte said to the Mirror. “There are many fighters on TUEs – Therapeutic Use Exemptions – who are legally juicing, the doctors just give it to them saying they’ve got asthma, they’ve got ADHD or whatever, and they’re legally juicing. That’s the bigger question in sport that needs looking into and needs shining a lot on, it’s TUEs, because you’d be shocked to see how many fighters are on stuff.”

Yes, you recognize the name, Dillian Whyte. Isn’t that the same guy who this story says allegedly tested PED positive himself, days before his July 20th bout against Oscar Rivas, at the O2 Arena in England? Same guy!

Whyte, age 31, beat Rivas via unanimous decision for the WBC interim heavyweight crown. Back in April, he was asked about what “Big Baby” Miller might have been thinking when he took banned substances. Whyte continued: “I think he’s thinking ‘I’m fighting a juice man so I’m getting on the juice too’. He kept on going on about Joshua’s therapeutic use exemptions so he knows Joshua’s on the TUEs. It’s a big fight and he doesn’t want to get hurt, he probably just got scared and thought ’s— I’m going to get killed, I’d better do something drastic!'”

No one has reported, in fact, that Joshua has asked for a “TUE,” for the record.

In all likelihood, the TUE situation Whyte described is probably not fiction. The WBC’s Clean Boxing Program front and center asks athletes to list any chemical or drug they want to use, via an exemption, and requests the prescribing physician describe why that medication is being proferred.

This is what writer Thomas Hauser posted to Boxing Scene:

“Multiple sources have confirmed that an “A” sample taken from Dillian Whyte tested positive for one or more banned substances prior to Whyte’s July 20 fight in London against Oscar Rivas. Although Whyte is in the World Boxing Council Clean Boxing Program which is administered by the Voluntary Anti-Doping Association (VADA), the test in question was administered by UK Anti-Doping (UKAD). The positive test result is believed to have come back on July 17. A knowledgeable source says that it was reported to the Whyte camp (including promoter Matchroom Boxing) and the British Boxing Board of Control by UKAD prior to Whyte-Rivas. However, the BBBC allowed the fight to proceed as scheduled.”

That right there, if it plays out to be the case, is loony tunes. We who care about the sport MUST come together in all nations to come up with a comprehensive and consistent protocol for PED positives. It makes next to no sense, beyond applying a “the show must go on” mindset, for a fighter who quite possibly is enjoying the usage of banned substances, to gain advantage over their foe to ply their trade…after being red-flagged for submitting a radioactive specimen.

Further to reports I can confirm that both Dillian Whyte and Oscar Rivas were subject to extensive VADA and UKAD testing for their bout. Both fighters were cleared to fight by both bodies and the BBBofC

He’s saying that VADA “cleared” Whyte to fight? I could be wrong, I am pretty sure I’m not, but VADA does oversight, they oversee testing and do the logistics, then hand over results. They are not in the business of “clearing” fighters, not how Hearn describes.

We in the sport have yapped endlessly about the need to be better, and do better, in this realm, and we still spin our wheels. For how much longer will we operate in this slap-dash and lazy and dangerous fashion?