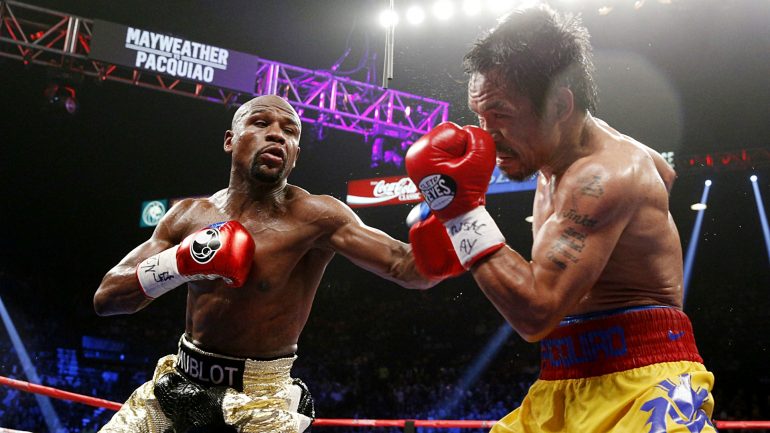 Did we see an escalation in the build toward Floyd Mayweather Jr.-Manny Pacquiao 2 on Tuesday, or did we just see more pettiness on social media?

Mayweather started the show with an Instagram post accusing the media of “clout chasing” by constantly adding his name to their coverage of Pacquiao. He also said people “hate” that a “Black, high school dropout” retired undefeated (50-0) and in good health.

I find it real ironic how every time Pacquiao’s name is brought up in the media, my name is always attached to it. This man’s entire legacy and career has been built off its association with my name and it’s about time you all stop using my brand for clout chasing and clickbait and let that man’s name hold weight of its own. For years, all you heard was that ” Floyd is afraid of Manny Pacquiao”. But what’s funny is, when we finally fought, I won so easily that everyone had to eat their words! All of the so called boxing experts, critics and jealous American “fan base” either went mute and ran for cover or made every excuse in the world as to why I should give Manny Pacquiao a rematch. My take on all this bullshit is that y’all are just upset that I broke Rocky Marciano’s record and hate the fact that a Black, high school dropout outsmarted you all by beating all odds and retiring undefeated while maintaining all my faculties simply by making smart choices and even smarter investments. Ultimately, I will always have the last laugh!

MUEHLHAUSEN: Why a rematch makes sense

Pacquiao countered with a much shorter tweet accusing Mayweather of trying to remain relevant by attending Pacquiao’s welterweight title fight vs. Keith Thurman on Saturday in Las Vegas, which Pacquiao won by split decision.

Pacquiao then threw down the gauntlet:

.@FloydMayweather You come to my fight and then use my name in a post but I’m the one that is trying to stay relevant? if you want to be relevant again… #MayPac2

The two champions met in a title unification bout May 2, 2015, in Vegas, with Mayweather easily winning a 12-round decision. Pacquiao later said he was suffering from a right shoulder injury that made him essentially a one-armed fighter. He underwent surgery on the shoulder days after the loss.

Mayweather, 42, claimed in his IG post Tuesday that people have been making “every excuse in the world” over that result and for why he should give Pacquiao, 40, a rematch.