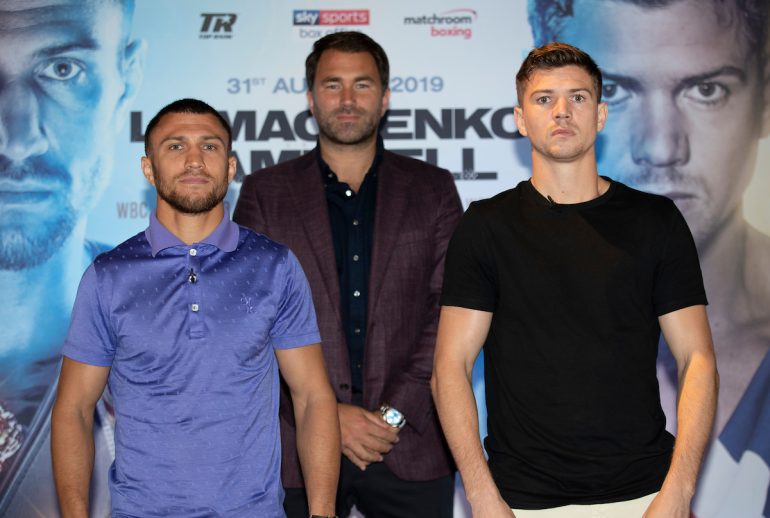 From left to right: Lomachenko, promoter Eddie Hearn and Campbell. Photo by: Mark Robinson.
22
Jul
by The Ring

“Good morning everyone and thank you for coming along today. Special fight, special announcement after a great night at The O2. Dillian Whyte moves to the mandatory position with the WBC. Also announced on Saturday was a huge unification fight, WBC, WBO, WBA and Ring Magazine World Lightweight titles.

“Vasiliy Lomachenko versus Luke Campbell, August 31, The O2, Sky Sports Box Office, ESPN+ in the States. It is a huge night for British boxing, we saw pre-sale records broken at the weekend and we’re expecting an immediate sell-out for this massive moment for British boxing.

“Thanks Eddie. I hope everyone’s not too tired after Saturday night. What a night. It was another great night at The O2 and it’s fantastic to see these two go head-to-head. Vasiliy Lomachenko, possibly the greatest fighter of our generation, a wonderfully talented amateur that lost just once in 396 fights and a fabulous pro career so far, a three weight World Champion.

“We were there at his professional debut in Las Vegas and I thought we were starting a journey that might not just end up in the Hall of Fame, but as one of the great fighters of all time. I really love watching Lomachenko, he’s got incredible ring craft and talent. It’s a pleasure to have him over here. This is going to be a special attraction. We’ve had great fighters over here in recent years like Errol Spence and Genady Golovkin but for me Vasiliy Lomachenko might be the best of the lot.

“Luke Campbell, our greatest ever amateur. He’s not only just a fabulous fighter and a beautiful southpaw technician himself, but he’s a great guy as well. He’s an absolute pleasure, he’s been great to work with over the years and it’s a golden opportunity for Luke.

“Both of these guys hit gold in London 2012, there is no reason why Luke Campbell can’t go and achieve his dream and achieve his goals, and give Lomachenko the toughest and best night of his life. And who knows, maybe he can bring these titles back to Britain. It would be an amazing if he does. It’s a fantastic moment for us on August 31, we cannot wait. It’s promising to be a terrific card as well. For Luke it’s a chance of a lifetime and we wish them both well.”

“Eddie thank you so much. It is a pleasure to be here. As always we want to thank Matchroom and their entire team for their hospitality. This is a once in a generation opportunity to see a tremendous fighter, number one in the world, against such an accomplished fighter in Luke Campbell. The entire world is waiting for this event to happen so we’re just looking forward to being back next month.”

“I am really blessed to represent the best fighter in the world. When I signed him I hit the jackpot! A lot of people say Madison Square Garden is the Mecca of Boxing, I have to disagree. UK fans know and understand boxing.

“This is two guys who are going step in the ring and they both have skills, a high boxing IQ and this more like a chess game rather than a boxing match. This is going to be a great night for boxing fans. Lomachenko’s dream is to unify all titles and this will be another step for him to reach his goal. We’re looking forward to August 31.”

“What an opportunity for Luke Campbell to get in there and really show what he’s all about. This week Shane said to me, ‘Lukes’ going to beat Lomachenko’ and I replied, ‘I know’. We know he’s got it all to do and he’s a big underdog but he’s going to go out there and do the job, do what he was put on this planet to do.

“He’s one of the best fighters we’ve produced. I know this first hand by training alongside him. He is going from strength-to-strength and really improving. The best is yet to come, he’s got the opportunity to fight the pound-for-pound number one and if anyone can beat him, it is Luke Campbell. He’s not here to make up the numbers and to give the British fans the opportunity to see a great fighter. I’m so excited to see my friend become World Champion, this is a huge occasion and a must see fight.

“He’s got that champion material, there’s not an ounce of self doubt inside him and he’s a born champion. Luke’s had to face frustration where you feel like you have to work harder so it is going to be that bit sweeter on the night. On paper he’s our best amateur fighter of all time and now it is his time to do the same in the pro ranks.”

“Hi everyone. I am happy to be in London again. I don’t want to talk too much, see you on August 31, okay.

“He is tall, he has a big reach, he is a smart boxer and has a high boxing IQ. He also has lots of amateur experience so maybe for me it will be a big challenge. I never think about being unbeatable, I just do my job and train hard. When I come in the ring I believe I win.”

“I’ve never shied sway from a challenge, this is a big one but it is the type of challenge I train and prepare for everyday. I believe this is the two best Lightweights in the division that are dancing off and this brings everything to the table. Power, speed, ability, this fight has everything. Come August 31 I believe that you’re going to see one hell of a fight. I’m a competitor and I want to compete at the highest level. I believe in myself and I will rise to occasion and be ready on August 31st. Vasiliy doesn’t need to talk much because the action will do the talking. You’re going to see a great fight.

“We know how good he is from being a young age but I never really thought we would be facing off. We set out goals and one is to have the titles. When I was young my father always said to me you’re going to be Olympic Champion and I never believed him. He also said in the pro game that I will hold all the belts and I finally now believe him.

“Im the challenger he’s the champion, obviously I respect everything he has done and achieved but I also know that every champion was once a challenger and I’ll be ready to give everyone a great fight on August 31. My carer is going from strength-to-strength. It took me a while to get settled in the pro game, now I feel like I’m finally settled. I’m in a great place and this is the perfect time for me. Both of us are in our prime and this for me is perfect timing.”