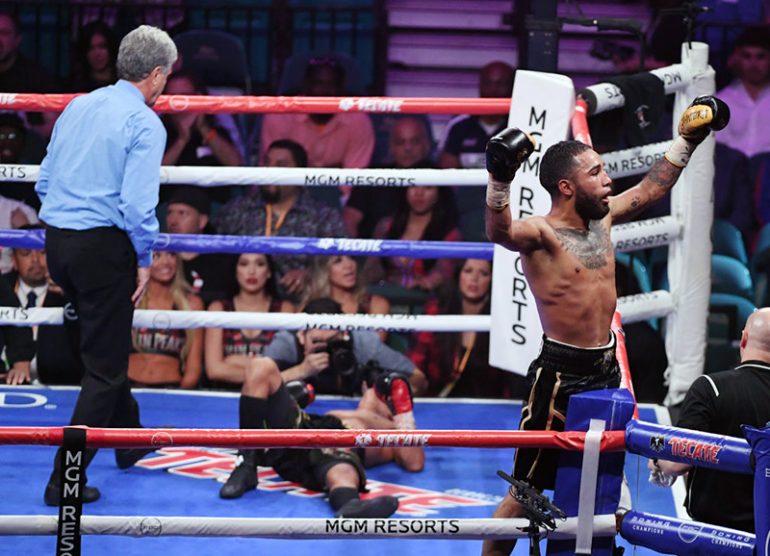 Luis Nery keeps stopping everyone in front of him. Photo by Ethan Miller/Getty Images
20
Jul
by Joseph Santoliquito

It took a few seconds for the shot to register, but when it did, Juan Carlos Payano crumbled to the canvas.

Luis Nery had a streak going, and on Saturday night on the Manny Pacquiao-Keith Thurman undercard at MGM Grand Garden Arena, the unbeaten Mexican bantamweight upheld it by winning his 11th-straight stoppage victory, scoring a TKO at 1:43 of the ninth round of a scheduled 12 rounder.

“(Payano) was a very complicated fighter at the beginning, he’s a veteran, so I had to try to adapt to his style to see how I could get in,” Nery said. “In the fifth or sixth round I started gaining control of the fight and then that left hook came to the body which was devastating.

“I saw the openings in the body and then that’s when the left hook came and it was over.

“I wasn’t really paying attention to how long the fight was going, I was just getting into a rhythm as it went on. I had to work hard to get to him because he’s a good boxer. The longer it went, the better I felt. I put my punches together well once I got going.

“I wanted to get him out early. But this showed that I do have the experience to go into the later rounds and still take out my opponent. I showed that I have good defense and can make adjustments.”

Payano was down on all three scorecards when the stoppage arrived.

“I’m a warrior and I wanted to keep going and fight back,” Payano said. “My coach wanted me to stay behind my jab a little more.

“During the exchanges it was Nery’s second shot that was getting in. We corrected the issue but then that body shot came in from nowhere and hit me in a rib that I had broken years ago against Raushee Warren.

“We’ll see what the doctors say about the rib, but once I’m healthy, we’re going to keep working. I got caught with a great shot, but I was definitely in the fight before the knockout.”

In the Thurman-Pacquiao co-feature, defined as a WBC welterweight elimination bout, Yordenis Ugás got off to a great start, knocking down Omar Figueroa, Jr. with a short right to the jaw with 1:01 left in the first round.

“The fight played out how I thought it would,” Ugas said. “I came out strong and Figueroa was tough as well. This is was similar to the fight everyone expected. I came out on top.

“I knew Figueroa was a tough guy, so I didn’t want to waste my energy trying to take him out early. I was ready to go 12 rounds.

“I’m extremely happy to be in this position to fight for the WBC title again. I will be ready for the winner of Errol Spence Jr. vs. Shawn Porter.”

Judges Eric Cheek, Julie Lederman and Steve Weisfeld all had Ugas by 119-107 shutout.

“Ugas fought a smart fight,” Figueroa Jr. said. “He was smothering me on the inside and holding. I thought the scores were too wide. I was following him and working the whole time. I felt like he only worked the last 30 seconds of the round, but I guess that was all it took.

“I didn’t have any problems with his size. I thought I was able to do my thing, but when he was holding me I couldn’t get my offense going.”

In a scheduled 10-round welterweight clash, Sergey Lipinets (16-1, 12 KOs) made a quick night for late-substitute southpaw Jayar Inson (18-3, 12 KOs) with a big left hook. 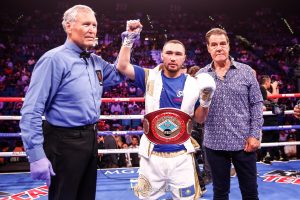 “Joe Goossen is an exceptional trainer and he just told me to work from a different direction facing a southpaw,” Lipinets said. “I just made sure to block his punches with my elbows. That was the only adjustment I had to make and it ended up working just fine.

“When I first heard the news about Molina, I knew that I wanted to still fight on a show of this magnitude. As far as fighting a southpaw, I’ve had so many amateur fights in my kickboxing career that I had no problem adjusting. It was just a matter of time. I also spar with great southpaws like Victor Ortiz throughout my career, so I was comfortable with the change in fighter.”

Said Joe Goossen, Lipinets’ Trainer: “You never know what to expect. You train for one style and then you get another. But I’ll certainly take the results, a second-round knockout. I really love that. We were warming up on that particular thing in the locker room so he was looking for it. A great fighter always executes what you ask him to do and he’s a great fighter. I expect him to be champion again one day, that’s for sure.”

Inson, who stepped in for John Molina Jr., who pulled out of the fight on Friday due to a back injury, took a textbook counter left hook to the chin.

The end came at :57 of the second round.

“I got hit and I slipped, that made it look worse,” Inson said. “When I stood up, I thought I was fine and tried to raise my hands and show the referee.

“I feel good now and I was ready to fight. I’ll be back and ready to put on a good performance.”