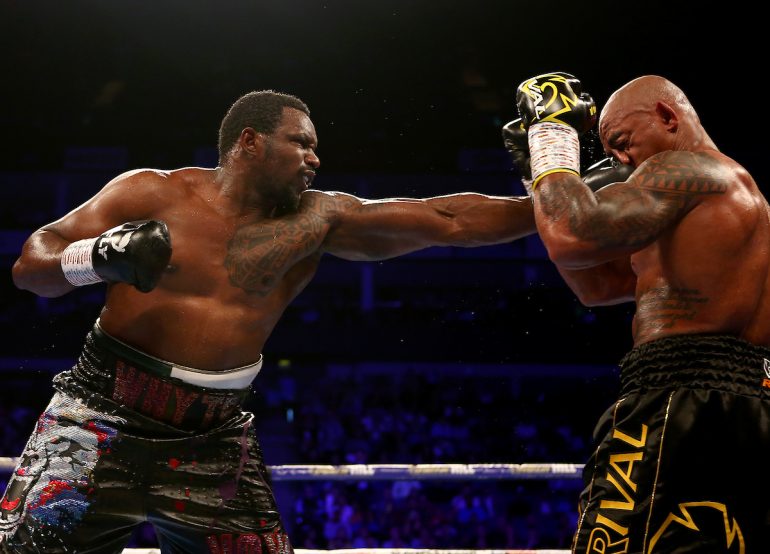 Whyte's jab was a key component in his off-the-canvas victory over Oscar Rivas. Picture By Dave Thompson.
20
Jul
by Tris Dixon

After more than 600 days as their No. 1 contender, a win over Oscar Rivas means he must fight full champion Deontay Wilder by May 2020.

Whyte, who is rated No. 5 by The Ring at heavyweight, said he will fight again this year, in November or December, and having placed himself in the unofficial role of the underdog, he won a hard contest against the game and determined Rivas.

“I keep showing up,” said Whyte, who had to climb off the deck after eating a flush uppercut in Round 9.

“There was a lot of pressure. Camp hasn’t been great, lots of things have been happening but I’m a professional. He’s a great fighter, he’s a tough man. I have a lot of respect for him.”

Asked if he will now get his shot at Wilder, the Brixton man sounded skeptical.

“A lot of things get said, not a lot happens,” he stated.

“Mandatory means I could be waiting another 600 days, but let’s see.”

Rivas opened the 12-rounder at the O2 Arena in London with intent, looking menacing with an overhand right, but Whyte landed some shots downstairs.

Rivas was sharp but Whyte rattled him with a right hand and the two traded in a wildly-exciting second round. Rivas found his legs by the end of the session and finished well.

Both tried to dictate behind jabs in Round 3 but it was a physical and competitive bout with neither willingly submitting distance. Whyte invested to the body and Rivas seemed to slow a little in the fifth but he was still a threat and he had moments of success with big hooks near the end of the sixth.

Still, it wasn’t enough to please his trainer, Marc Ramsay. “Are you fucking serious?” Ramsay screamed at him when he returned to the corner.

He was a little one-paced and predictable but remained a danger searching for overhand rights and left hooks.

Whyte fought on the back foot in the eighth, shaking Rivas with an uppercut and then forcing the Canada-based Colombian to soak in a horrible left into his side.

Whyte shipped a vicious uppercut in the ninth and took a count and he had to get on his bike to get his legs back to keep Rivas at bay. Even then, Dillian returned fire with some of his own big shots before Rivas landed a right near the round’s end.

The 10th was gritty and hard. It was an exciting fight and there was not a great deal in it. 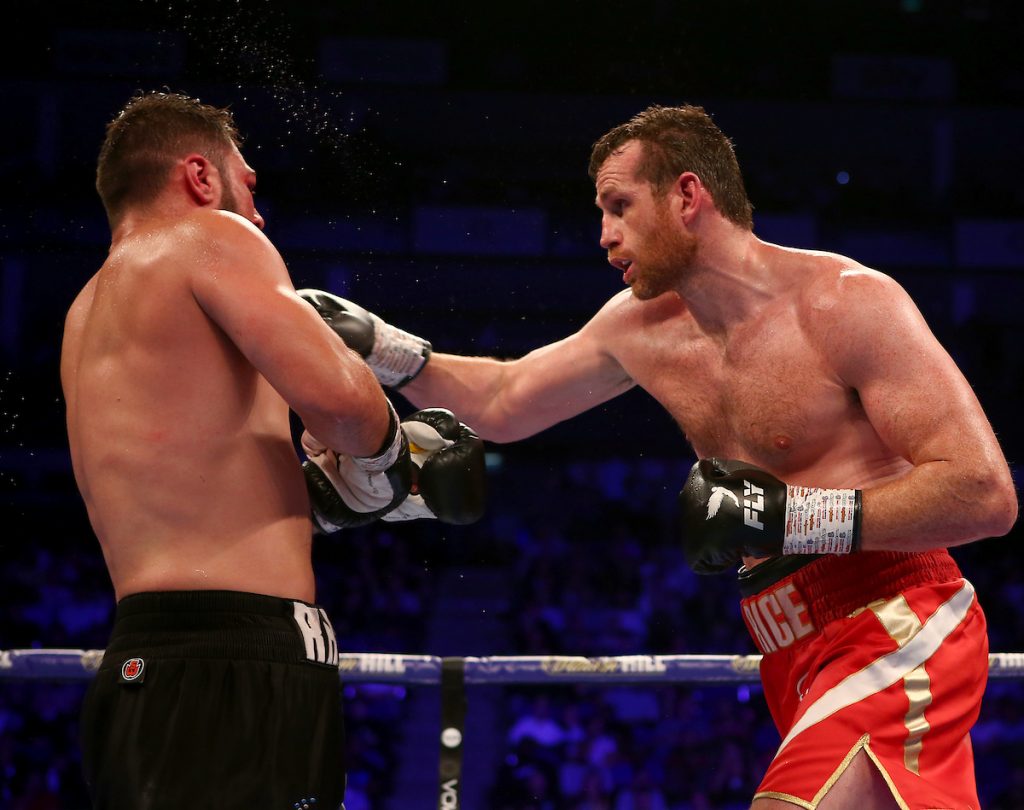 Price (right) picked off Allen at will. Photo by Dave Thompson.

Liverpool’s David Price scored what has to be considered the win of his career, defeating countryman Dave Allen. Referee Marcus McDonnell accepting the Doncaster man’s corner retirement before the start of the 11th.

Price looked comfortable from the start, controlling the distance and the pace. Yes, he worked behind the left using his height and reach advantages, but his variety was good. He found a home for occasional right hands and selected a nice right uppercut in the third.

Allen was untroubled, however. He had his own success in Round 4 as he closed the gap.

It was intriguing without ever catching fire.

Price, a 2008 Olympic bronze medalist, was still happy with the pace but the question was whether he would run out of gas.

Allen was becoming frustrated as the fight progressed. Price was claiming him when he came in close and landed some attractive jabs and uppercuts in Round 7.

Allen kept grinding away but he was struggling to get a foothold, even as Price was supposed to tire.

He didn’t. In fact, through Round 10 Price started to box with a swagger and when that round ended former IBF middleweight titleholder Darren Barker, Allen’s coach, withdrew his man from battle.

It was a fight between a touted prospect who was meant to be a world beater and someone who very little was expected of but who found himself on the verge of a match with Alexander Povetkin, the carat that had been dangled before Allen ahead of this showdown. 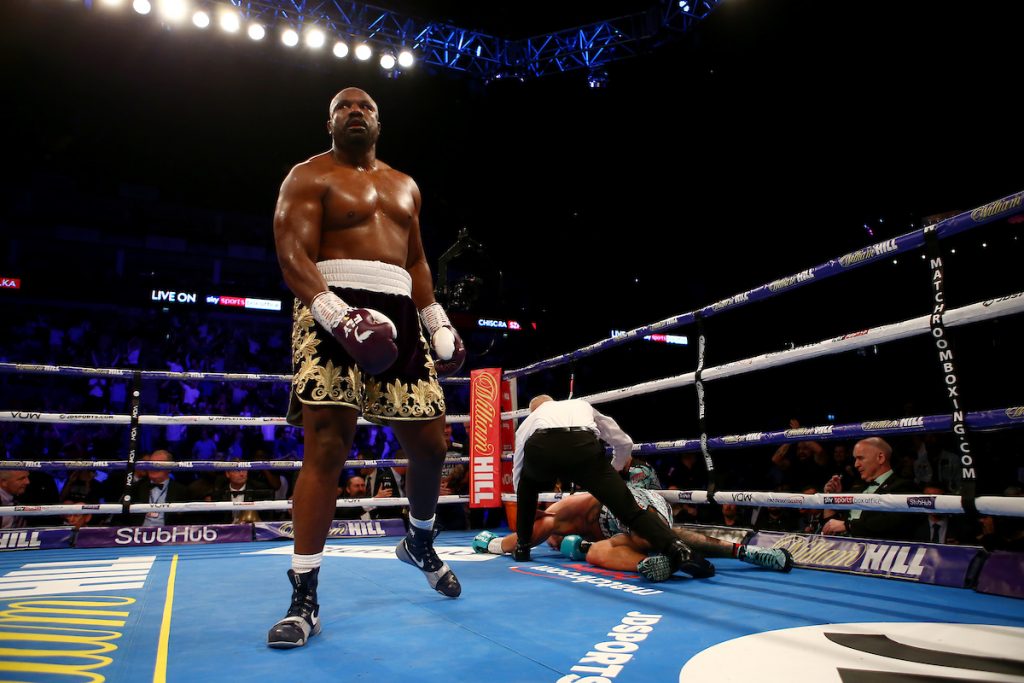 Chisora, who said he’d had nightmares sparring left-handers in training camp to get ready for the visitor, until the final few days of preparation when everything clicked, has now put himself in line for another big fight.

Chisora had been linked to a match with Joseph Parker if successful but new heavyweight contender Aleksander Usyk was shown on the big screens applauding Chisora, and what a welcome to the heavyweight division that would be after this performance from “Del Boy”.

Chisora, though, admitted New Zealander Parker was in his sights.

“I love it, I can’t get enough of it. We want to try and get Joseph Parker as long as he doesn’t run like an Australian chicken.”

It looked like it was warming into a war. Then, as Szpilka guarded his body, Chisora whipped over a right hand. Two further rights then landed flush – with referee Mark Lyson trying to intervene although too slow to make it in time – and they destroyed the Pole who dramatically crumpled, sagging against the ropes before pitching face first. It was over after 1:01 of the second round.

There were worrying scenes as the visitor lay prone on the canvas but he was eventually helped to his feet and then onto his stool where he gathered his senses and was observed by the ringside physician.

Asked of the clinical finish, one of the knockouts of the year, Chisora said: “It’s one of my favorites. I know him well. I enjoyed it.”

Szpilka is now 22-4 (15 KOs), and had previously been stopped in four by Adam Kownacki, in nine by Deontay Wilder and in 10 by Bryant Jennings.