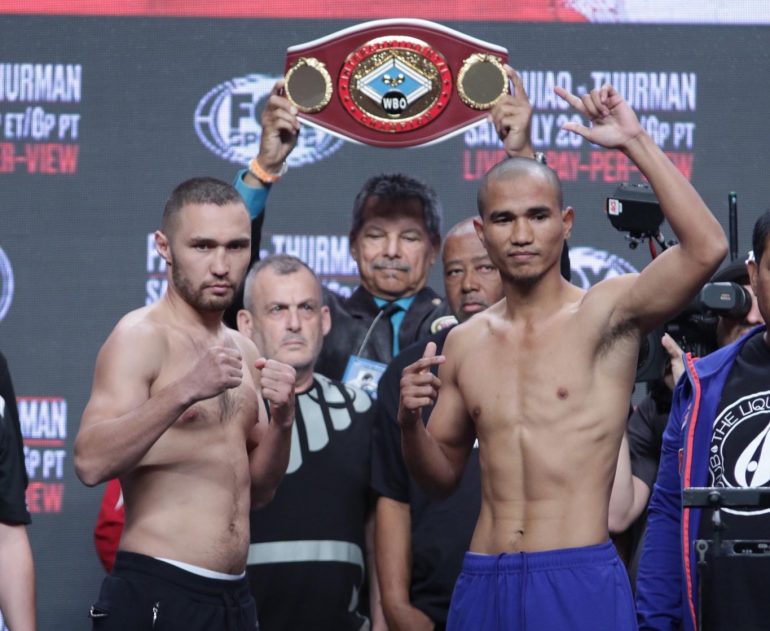 Jayar Inson is getting a bump up the card on Saturday after stepping in to replace the injured John Molina Jr. against Sergey Lipinets on the undercard of the Manny Pacquiao-Keith Thurman fight on Saturday.

The news was announced by Premier Boxing Champions on Friday, with Molina pulling out due to a back injury. Inson (18-2, 12 knockouts) had been scheduled to face Mahonri Montes in an eight-rounder on the undercard before accepting this promotion to the pay-per-view portion of the card.

The fight will be the second straight for the 28-year-old Inson at the MGM Grand, having lost a split decision to Jonathan Steele on the Pacquiao-Broner card in January. Inson, of Davao City, Philippines, is signed to MP Promotions and is no stranger to fighting abroad, having fought in Japan, South Africa and China as well.

“This is big opportunity for me,” said Inson. “This is a big test.” Inson adds that he only took a look at Lipinets’ fights Friday morning – right after he was offered the fight.

Lipinets (15-1, 11 KOs) is a former IBF junior welterweight titleholder and has won two straight since moving up to 147 pounds, including an exciting tenth round stoppage of Lamont Peterson in his most recent bout in March.

While the Molina-Lipinets fight had the potential to steal the spotlight because of Molina’s fan-friendly brawling style, Inson brings a similar aggressive style. Inson, a southpaw, is a come forward puncher, but is lacking in speed, a deficiency that Steele took advantage of to land his counter punches.

Lipinets-Inson is scheduled for ten rounds, with both men weighing in at the 147-pound limit.

A message to Inson’s trainer Nonoy Neri was not returned by the time of this story’s publication.