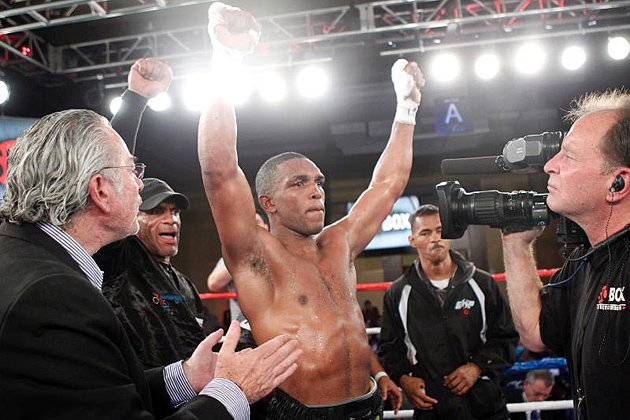 Middleweight contender Tureano Johnson battered Jason Quigley before the fight was stopped at the end of the ninth round Thursday night at the Fantasy Springs Resort Casino in Indio, California.

Despite Johnson facing the stronger opposition of the two, Quigley was the favorite going into the fight. Johnson entered the bout winless in his previous two bouts, a loss to middleweight contender Sergiy Derevyanchenko and a draw against Fernando Castaneda on Feb. 9.

The 28-year-old Quigley fought in a stay-busy bout on Mar. 23, stopping Mathias Eklund in round two.

Both fighters stood in the pocket from the opening bell. It was an even bout until round four when Johnson’s punches began to take their toll on Quigley.

During the opening minute of round six, the 35-year-old Johnson hurt Quigley with a left hook to the head. Quigley was able to gather himself, but his punch output began to drop significantly with each passing round. Johnson continued to walk Quigley down against the ropes, letting his hands go and connecting several times to the head and body.

After the end of the ninth round, Quigley’s corner told referee Eddie Hernandez to stop the bout.

“I came inside the ring with so much on my back, but the struggle is behind me now,” said Johnson, who represented the Bahamas at the 2008 Olympic Games in Beijing. “I heard that Quigley had a victory party, but he didn’t invite me. Quigley is a dangerous fighter. Boy has heart. He didn’t quit, but he did.”

“I’m here to get another shot. I’m here to become a world champion. I want a Canelo (Alvarez). I want a (Jermall) Charlo. I want a Sergiy (Derevyanchenko). I want an (Demetrius) Andrade.”

Quigley, who is originally from Laghy, Ireland and now resides in the Los Angeles suburb of Woodland Hills, drops to 16-1 (12 KOs).

Melian was considered a blue-chip prospect, recently signing a promotional deal with Golden Boy. In his last bout on Apr. 26, he overcame two knockdowns to defeat Isaac Zarate by unanimous decision.

Baez, who was making his United States debut on Thursday, had mostly fought on obscure club shows in Tijuana and his hometown of Mexicali. The 23-year-old Baez entered the bout having won his previous three bouts.

From the opening bell, Baez was the aggressor, closing the distance between the two and letting his hands go. Baez’s thudding hooks and crosses kept Melian on the defensive, especially in round two when he was momentarily stunned by a right hand to the head.

The pace of the fight slowed by the middle rounds, but Baez was the effective fighter, initiating exchanges and continuing to land to Melian’s head and body.

Sensing he was down in the fight, Melian rallied during the final two rounds, fighting with a sense of urgency. Both fighters let their hands go during the second half of the final round, landing thudding punches that brought the crowd to their feet.

All three judges scored the bout 97-93 in favor of Baez.

“I felt excellent and I’m grateful for the opportunity that Golden Boy gave me,” said Baez, who is trained by Joel Diaz. “I’m honest that I thought I lost the last round. I felt I won all the rounds before that. I won because I fought with a lot of heart.”

In an all-out war between flyweight prospects, Ricardo Sandoval (16-1, 11 KOs) of nearby Rialto stopped Marco Sustaita in the fifth round.

Sandoval dropped Sustaita twice in the opening round, but was also dropped himself in the same stanza. Sustaita (12-2-1, 10 KOs), who resides in the San Diego suburb of Oceanside, dropped Sandoval once in the second round.

Both fighters had their moments, but Sandoval began to get the upper hand during the exchanges. During round five, Sandoval hurt Sustaita, battering him until referee Eddie Hernandez, Sr. stopped the bout at 1:16.

Now fighting at lightweight, Carlos Morales (19-4-3, 8 KOs) knocked out Rosekie Cristobal (15-5, 11 KOs) of the Philippines in the opening round.