Mike Lee’s drive has brought him to his desired destination 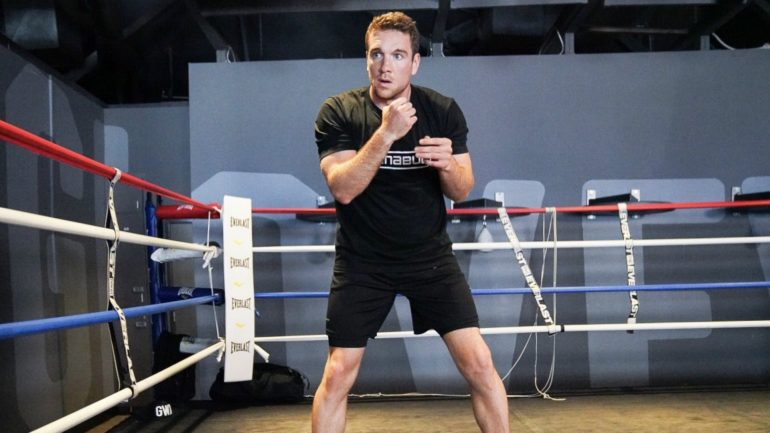 The goal for any boxer, from the time their career begins, is to become a world champion. Only some of them will succeed in that journey.

A title shot is all Mike Lee has wanted ever since he chose the sweet science over a job on Wall Street after obtaining a finance degree from Notre Dame. Lee will finally get to live out his dream Saturday night when he steps through the ropes at the MGM Grand Garden Arena in Las Vegas to challenge Caleb Plant for the IBF super middleweight title. The bout is the lead-in to the Manny Pacquiao vs. Keith Thurman fight later that evening.

“I’m so excited to be getting this opportunity,” Lee told Sporting News. “It’s the culmination of years of hard work and a long career. A lot of people didn’t think I’d get to this point. I always believed in it. Now, I just have to go out there and perform on July 20.”

The Downers Grove, Ill., product has worked extremely hard to get to this point after it appeared as though it would never become a reality.

In September 2012, things couldn’t have been going better for Lee. He was undefeated in 11 fights and someone to watch in the light heavyweight division. He was about to appear in a commercial for Subway during the 2013 Super Bowl. His star was shining bright. He was ready to break through.

Then it all came to a screeching halt.

Lee crumbled to the canvas after his back gave out during a workout session with then-trainer Ronnie Shields. Little did he know that his life was about to change significantly.

Lee began suffering constant back and joint pain. He had headaches and was getting extremely sick. Eventually, he was diagnosed with an autoimmune disease known as ankylosing spondylitis. He still deals with the pain every day, from the time he wakes up in the morning to the time he goes to bed

“My immune system was negatively impacting itself,” Lee said. “Essentially, I was in a hospital trying to figure out what was wrong with me.”

Lee expected the disease to go away, which would allow him to return to the ring. Instead, he encountered a roadblock.

“I was told that I would never box again,” Lee said. “That really infuriated me because every time someone tells me I can’t do something, I want to do it twice. Doctors are smart and know what they are doing. I knew, though, that they didn’t know what I had in my heart and I was a different human being.

“I told them they were wrong, and I would figure it out and get back into the ring.”

Eighteen months later, in April 2014, Lee made a miraculous return and scored a sixth-round TKO over Peter Lewison. Since then, Lee (21-0, 11 KOs) has won his next nine fights to earn a crack at Plant.

Why did Lee return after being told it wouldn’t be in his best interests to fight? He could have a career outside boxing. He wouldn’t have to endure the rigors of a training camp or add to his physical pain.

In his mind, he had no other choice but to drive himself, to keep pushing himself to the limit when almost everyone else would have folded their tents and called it a day, because all he wanted was that one shot at making history.

“Quitting was never an option,” Lee, now 32, said. “I’m glad I didn’t because there were times I was injured or sick and could have walked away from it all. If anything, it proved how bad I wanted this more than those other things and how much of a dream this is for me and how much I was willing to sacrifice and put my body through. I’ve never done easy. I’ve taken a path most wouldn’t bother continuing on. Doing all of this has led me to July 20 and fighting to a world title on a national stage. It’s a dream come true.”

People aren’t born with drive; it’s instilled in them. Lee got his from his parents, who grew up in inner-city Chicago having next to nothing. His parents gave him and his sister a life they themselves couldn’t have. They instilled morals in their children, and they always drove them to do more.

“I want to be an inspiration to people that are either dealing with an autoimmune disease or dealing with injuries or sickness and believe they couldn’t do it and continue to try and push through,” Lee said. “That drive was something instilled in me at such a young age. I was always such a competitor and wanted to win. My dad told me at such a young age that tomorrow is promised to no one. As a kid, I had this weird thing inside me that I had to win every day like it was my last and really take chances and go for it.

“That’s what my life has been all about. It’s about taking these chances and risks and going for what I love and not being apologetic about it. It’s definitely not an easy way to go. But at least I can go to bed at night knowing I went for it no matter what happens. I said that the day I turned pro. That’s how I choose to live my life in and out of the ring.”

After being told to end his dream, Lee has finally reached his destination, but now another obstacle stands in front of him: In his first bout at super middleweight, he’ll be standing across one of the premier boxers at 168 pounds, a fighter who will try to destroy everything Lee has worked so hard to achieve. He knows he isn’t expected to walk out a champion. The betting circles have him as high as an 11-1 underdog.

None of that matters to Lee. He plans on continuing to defy the odds in Sin City and having the championship belt wrapped around his waist.

“I’ve envisioned this going many different ways and they all end with me winning,” Lee said confidently. “I know I can beat him. I know the best Mike Lee beats Caleb Plant and that’s exactly what’s going to happen.”