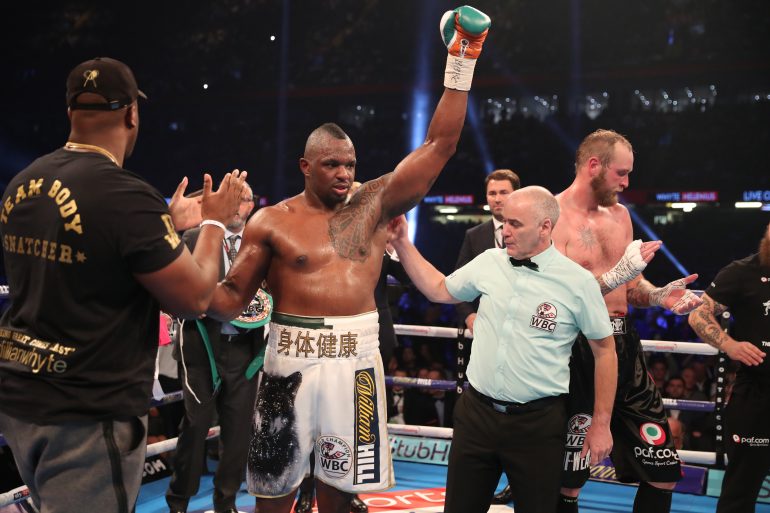 The London heavyweight is on a run of high-profile wins having dispatched Derek Chisora (twice), Lucas Browne, Robert Helenius and Joseph Parker in five of his last six and he’s been sat in the WBC’s No. 1 spot for nigh on two years.

And while he’s had no choice but to be patient, a fight with one of the sport’s big four heavyweight franchises – Anthony Joshua (a rematch he’s craved since losing to AJ in 2015), Andy Ruiz, Deontay Wilder and Tyson Fury – has eluded him.

Wilder is the man he has long been at the front of the queue to face, but the WBC have not forced the American’s hand, and Wilder has already talked about his next two fights possibly being a rematch with Luis Ortiz and a return with Fury.

That means the wait will go on for Whyte, but he’s refusing to sit still.

He wants to fight. He still wants to improve. He wants to make sure he is ready when the time comes.

That mindset sees him go in with 26-0 (18 knockouts) Rivas with the stakes as high as they’ve ever been. A slip-up now and the big chance he’s been fighting for will have evaporated, likely for months, possibly for years, maybe for good.

“I’m just trying to give the fans the best fights I can give them until a title comes along,” said Whyte, as fight week came around. “There’s no point in just fighting dead bodies.”

He realises that, at 31, and with a brief unpaid career behind him, he will learn by boxing at a high level, while walking a tightrope that could cost him mega-fights.

“[It’s] to improve as a fighter,” he said, when asked of his level of opposition. “I’ve had seven amateur fights and 26 professional fights, some of these guys have had 200 amateur fights. All of these guys I’m fighting, they’re all banana skins. That’s why I’m different. I go out there, I fight the best, I beat the best, so what. What can people say? At least I’m not hiding. At least I’m not fighting Tom Schwarz… I’ve fought proper contenders, people who were hungry, young and fresh who hadn’t had a loss on their record or who had been world champion the fight before. I try to fight the best people there so some don’t know who’s the underdog in the fight and some people say, ‘Dillian’s going to lose to him, this guy’s going to beat Dillian, Dillian’s going to get knocked out’. I’ve just got to do my thing, man.” 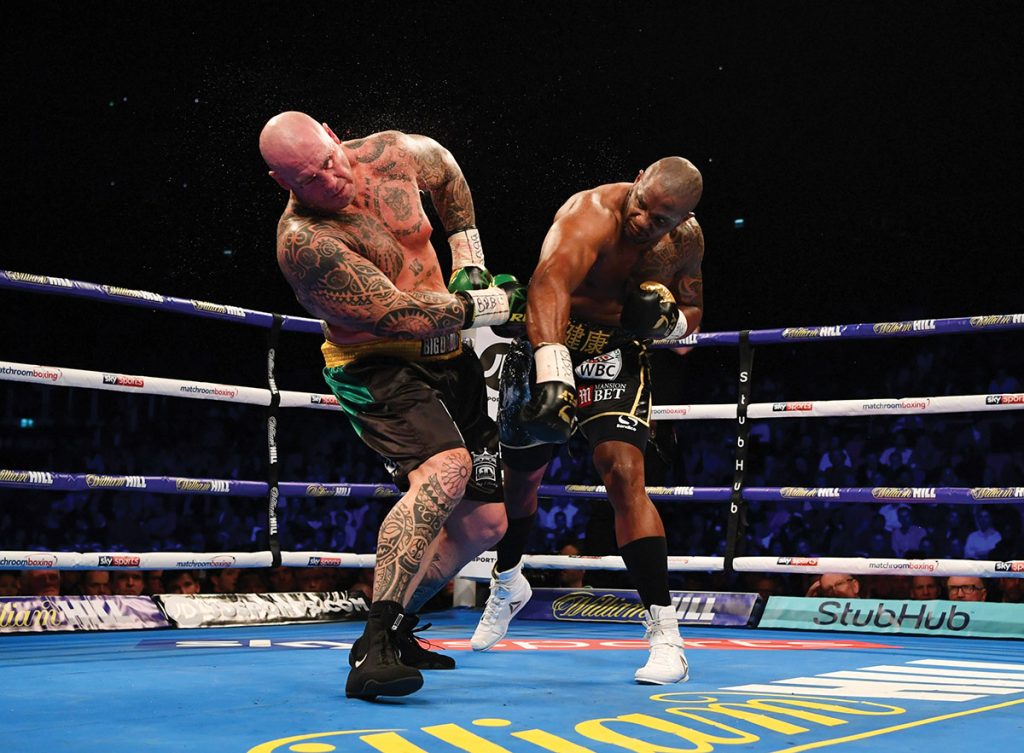 When asked about motivation he pauses for thought. He has become an attraction in the U.K. He has become a Sky Box Office fighter, he’s on the popular TV show Masterchef in the near future and he’s one of the biggest names in British boxing.

But it’s his relationship with his supporters that drives him.

There are big contests for the big names in the big division but Whyte, clearly irritated by the showpiece events not happening, reckons that as exciting as the heavyweight landscape might be, it counts for nothing if the top guys don’t fight one another.

“Yeah, there are some good fights there but the problem is making them,” he explained. “I think there are two or three of the top fights that will never happen.”

When asked to pinpoint which ones might be lost for good, he doesn’t identify contests individually but he soon turns his attention to Wilder, the long-reigning WBC titleholder.

“Why was Wilder so pleased Joshua lost?” he asked rhetorically of the failure for the fighters to be on the same commercial page. “He lost that massive payday, he lost one of his biggest fights. Why would he be happy? It’s things like that that’s nonsense.”

Wilder and Joshua’s teams argued over percentages and A-sides and B-sides and before the fight could be made, the momentum of having an undefeated unified champion was gone with Ruiz’s stunning upset of the London heavyweight. The talk of 70-30, 60-40, 50-50 was gone, and the Americans would have delighted in Joshua’s demise. It’s a sentiment Whyte can’t get on board with. He felt Wilder would have been better off taking a small slice of a bigger pie rather than a large slice of a smaller pie.

“But Joshua is still a bigger draw than him, even in defeat. It makes no sense,” he said, before venting on the man who’s kept him waiting at the alter.

Whyte said that he’s seen Wilder only once in person (“he didn’t say anything to me”) but if he saw him now, what would he say to the champion?

“Stop being a bitch!”

He’s on an opposing network to Sky’s Whyte, fighting on BT Sport in the U.K., and he and Whyte have traded public barbs in recent weeks.

Dillian seemed unsure whether Tyson is all talk. For a man who has spent more than a year on the outside trying to get a look in, it’s unsurprising he’s a little sceptical of fighting Ring No. 1 Fury.

“I would take the fight with Fury in a minute but people say a lot of things,” Whyte said. “Tyson Fury says random stuff sometimes that doesn’t make any sense, you know?”

Then, when asked about the network clash, Whyte believed it was not an obstacle.

“Well, it’s an easy fight to make,” he said. “I’m with Sky but I’m sure for a big fight like that we could come to some sort of agreement to get the fight done.”

Whyte said he had agreed to box for ESPN in the U.S. provided they matched him with Fury inside the first year of the deal, but they wouldn’t agree. 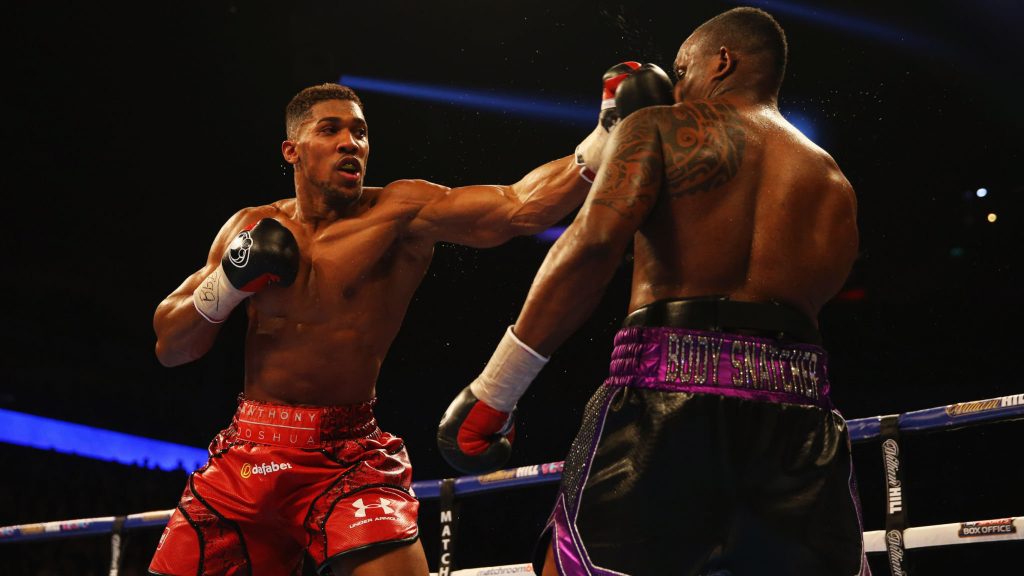 Whyte (right) in action against Anthony Joshua, the only fighter to have defeated him. Photo courtesy of Sky Sports

Then there is his old rival, Joshua. The two seemed destined to rematch at Wembley stadium in April but a deal couldn’t be done over a proposed return fight.

Whyte is asked how dramatically Joshua’s stock dropped in defeat to Ruiz.

“I don’t know, it’s hard to say,” he said. “If he loses again then he’s lost a lot. But if he wins then they will just say it’s a little blip in his career and that’s it.”

So what happened that night in the Garden, when Ruiz shocked the world?

“It’s hard to say because it was very strange behaviour with Joshua, the whole way through,” Whyte continued. “I’m baffled by the whole thing. For someone who appears to be so professional, so humble and stable… The stuff he was doing, the stuff he was saying in the ring, the way he was acting… But he’s a human being. Everyone thinks he’s a God but he’s a human being and everyone has their ups and downs and everyone breaks down and maybe he just had a mental breakdown and that was that.”

Some said Joshua was simply looking beyond the man in front of him, to Wilder, to Fury. Whyte insisted that’s not the case with him. He is not allowing himself to look beyond Saturday’s visitor, even though he reckons he’s faced better men.

“He [Rivas]’s not the best [I’ve faced] but he’s one of the best,” Whyte added. “He hits hard, he’s undefeated so he will have confidence, he’s a very experienced man, a top amateur who competed in the Olympics. He’s a tough, dangerous man, he’s a top contender.

“I don’t overlook no one, man. I’ve been working hard. You haven’t seen me much on social media, doing a lot of media, doing this and that. I’ve been locked away and training, training in Loughborough and just grafting.”

Some of Whyte’s rare posts have included his training. He’s incorporated some CrossFit-type movements and workouts to improve his shoulder strength but says he will do whatever his coaches tell him to do in order to get the victory.

But Whyte is also staying true to his sport. He’s spoken with Frank Bruno for Sky Sports and when Gerry Cooney stopped by to see him in camp recently, he was asking the American how he preferred to set up his devastating left hook.

Cooney said it would start to the body, and then he’d go up top. Dillian, who is trained by Mark Tibbs, was all ears.

But throughout a conversation with “The Bodysnatcher”, he notably sounds down on occasions.

He’s asked, for instance, whether he feels he gets the respect he is due.

Sounding low rather than fired up, he said, “I don’t really care to be honest. I just have to get the ‘W’ and just keep moving on. To be honest a lot of times people don’t give fighters credit they’re due until after they’ve retired and gone. I can’t spend my life focusing on what respect I get and what respect I don’t get. I just have got to win, improve and progress and move on.”

There are points in discussion when he sounds disenfranchised by the business, frustrated at being made to wait, having to watch, while he grinds through difficult assignments.

The conversation dips, again, when he’s asked whether he sees himself as the best in the world.

Then, he carried on, equally nonchalantly, saying, “It’s hard to say who’s number one at the minute. Who has Fury beat to be number one? If you beat Tom Schwarz are you number one? So if I fight Tom Schwarz in my next fight and I knock him out in a round, then I should be number one or number two if I did what Fury did?

“Fury hasn’t had a good win since he beat Klitschko. Who has he beat since Klitschko? He beat Klitschko, he had the world at his feet and he destroyed his own career. Everyone says it was the governing bodies… No, Tyson Fury destroyed himself. It’s all self-inflicted.”

It’s an unforgiving, hard-line stance from Whyte on a man who’s battled demons but he’s been jerked about by the sport for months and maybe, just maybe, that’s why he wants the tougher tests.

He wants to work out his frustration on tough nuts like Rivas.