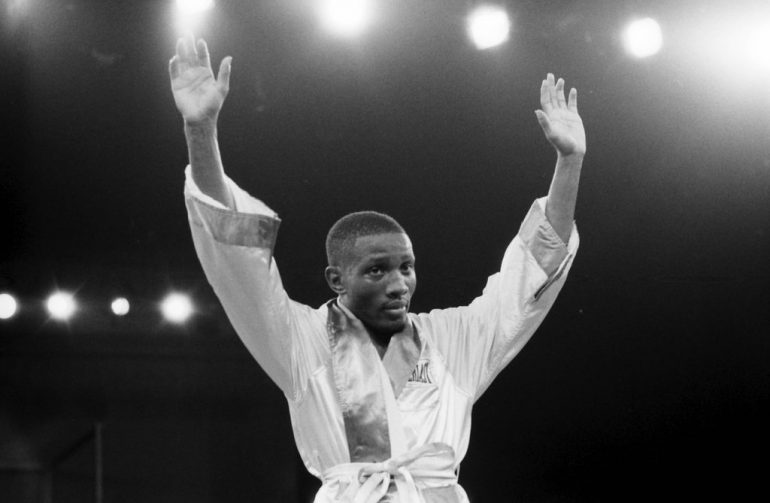 Photo from The Ring archive
15
Jul
by Anson Wainwright

Editor’s Note: This feature originally appeared in the August 2015 issue of The Ring.

Whitaker burst onto the scene as a member of the gifted 1984 U. S. Olympic team, winning a gold medal in the lightweight division. He reportedly finished his amateur career with a sterling record of 201-14.

The Virginia resident has fond memories of his Olympic experience.

“I was with 11 of the greatest guys you could wanna be with,” Whitaker told The Ring. “We were teammates, we were together all the time, we supported one another when guys had fights, everybody showed up. It was fun being around.

“It’s like one big family, having 11 brothers. The Olympics was different. It was the most successful time in my life winning the Olympic gold medal.”

Whitaker was extremely successful as a pro, too, winning world titles in four weight classes to earn recognition as one of the greatest fighters of his generation.

And “Sweet Pea” succeeded even though he often found himself on the wrong end of controversial decisions, starting with his first title shot against WBC champ Jose Luis Ramirez in 1988 in France.

The only people who thought Ramirez won the fight were those closest to him and two of the three judges, who awarded him a split decision victory. Whitaker rectified the injustice in 1989, first by dominating Greg Haugen to win the IBF 135-pound title by a unanimous decision and then avenging the loss to Ramirez six months later. 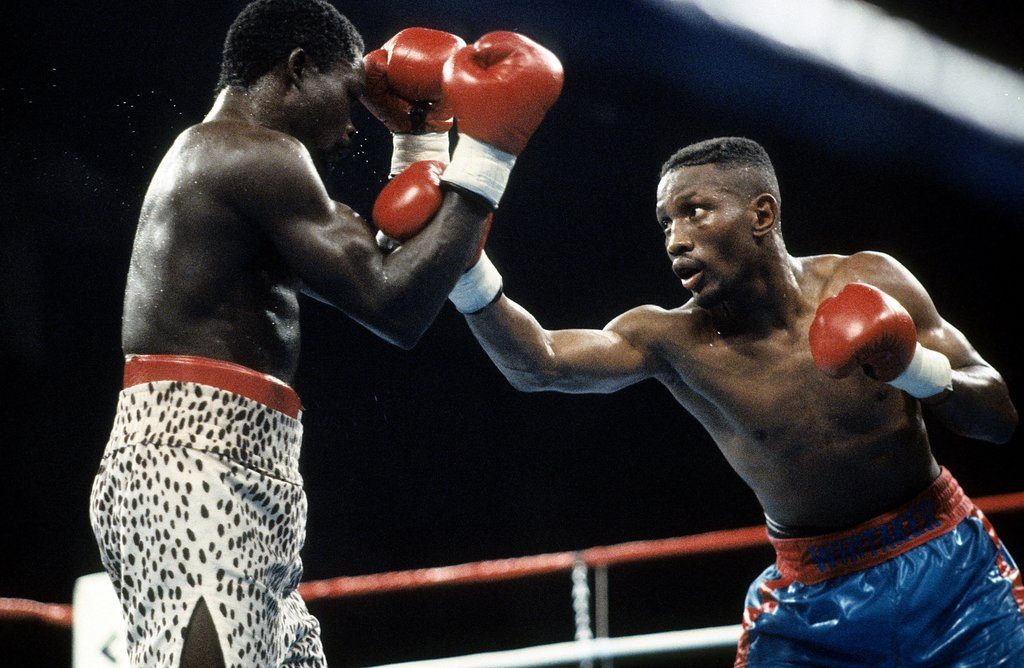 Whitaker (right) against Azumah Nelson. Photo from The Ring archive

Whitaker wouldn’t lose again until 1997, when Oscar De La Hoya defeated him by another disputed decision, and would finish with a record of 19-3-1 in world-title fights against some of the best fighters of the time.

The most bitter disappointment of his career might be his draw with Julio Cesar Chavez in San Antonio in 1993, when The Ring ranked Chavez and Whitaker Nos. 1 and 2 in the world.

Once again, Whitaker, too quick and slick for the Mexican legend, appeared to win a clear decision only to learn upon the announcement that he had to settle for a majority draw in a pro- Chavez environment.

“Fighting Chavez is one of my favorite memories,” he said. “I know I won. The good thing was the fans know who won.”

Whitaker (40-4-1, 17 knockouts) retired after losing a wide decision to Felix Trinidad in an attempt to win back the IBF welterweight belt in 1999 and being forced to quit when he broke his clavicle against Carlos Bojorquez two years later.

He has no regrets.

“I think I had a complete career,” he said. “I had a good 17 years as a pro. I tried to fight everybody, I didn’t pass up anybody.”

Whitaker was inducted into the International Boxing Hall of Fame in 2007. He has five children and three grandchildren. “Life is great,” he said. “I’m enjoying myself.”

Whitaker kindly agreed to speak about the best fighters he fought in his career in 10 categories.

Buddy McGirt: I didn’t really get hit with them jabs. I tried to keep guys on defense. That was one of my best assets. That’s where I start off at, using the jab and being constant, keeping my jab out there. I think every fighter should have a good jab; a good jab could take you a long way. Of the guys I fought I would say Buddy McGirt had the best jab.

Azumah Nelson: (Laughs) That’s a tough one because it never took me long to get to anybody. But if I picked someone, I would say Azumah Nelson. I don’t think nobody on this planet had a better defense than I did. There are a lot of fighters with good defense but not like Pernell Whitaker.

McGirt: Had a pretty good chin. It’s kind of hard to say who had a good chin. I liked hitting to the body; I liked to work from the body up. McGirt took a good punch.

Julio Cesar Chavez: Everybody I’ve been in the ring with was considered a big puncher. The one who stands out the most would be Julio Cesar Chavez. I didn’t experience any big shots. I don’t like taking punches.

Oscar De La Hoya: I made all these fights so easy, it’s hard to say who had the better hand speed. I consider all of them being great, they just weren’t quicker than I was, though I would say Oscar De La Hoya had good hand speed. They start off with speed but by the time I break ’em down, the speed’s over.

Diosbelys Hurtado: I didn’t have a problem with anybody. All the fighters I fought were good fighters. It’s hard to give credit when you make guys look so bad all the time. I would say Diosbelys Hurtado had good feet. Like I say I just went in there and took fighters out of their fight game, turn them into being ordinary fighters.

All of them: All of the guys I fought were smart fighters; I was just a little smarter. Chavez was pretty smart, De La Hoya was a pretty smart kid, McGirt, I fought him twice, he was a veteran. I don’t have no favorite.

Nelson: I didn’t give anybody the opportunity to punch. I tried to be the complete boxer. I outboxed all off them. The one that comes to mind is Azumah Nelson. He was a strong guy. He just kept coming forward.

Chavez: [He] was just a good fighter. He had great boxing skills, he was a big puncher, you had to be careful. You don’t get caught up with him, going toe to toe.

Nelson: I liked Azumah Nelson. He kept on coming, he never gives up, he hung in there.