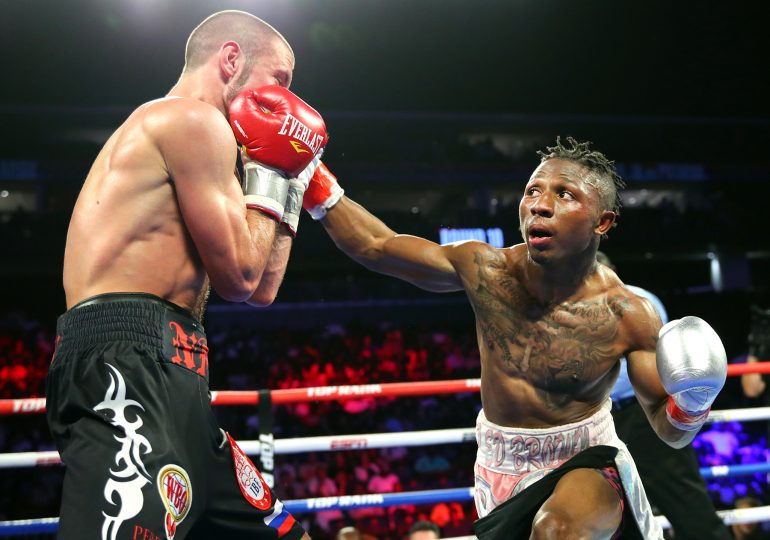 NEWARK, N.J. — Joshua Greer Jr. didn’t get to break out his trademark “Night, Night” pillow, but he still came away with a majority decision victory over Nikolai Potapov on Saturday night.

The official scores at ringside were 114-114, 116-112 and 115-113, awarding Greer the victory in the co-feature to the Shakur Stevenson-Alberto Guevara bout at the Prudential Center.

While both Greer (21-1-1, 12 knockouts) and Potapov each had good moments in the bout, it was ultimately the body assault by Greer (20-2-1, 11 KOs) that kept the Russian fighter off balance. Greer gave away a few of the early rounds trying to figure the slick Potapov out, as the 29-year-old Russian was much quicker and elusive than Greer anticipated.

By the fifth round, the 25-year-old Greer’s energy level increased and he started to find a home for the right hand to the body. Potapov was clearly bothered by the work but fought well enough from the back foot to land good counter shots of his own.

In the sixth and seventh rounds, Greer mixed in a double jab that opened Potapov up for power shots. In the eighth round, it was another body shot from Greer that had Potapov backing up into the corner, but again Potapov slipped a punch and moved away from danger and chose to play defense rather than exchange with the Chicago native.

Feeling the knockout and possibly the fight slipping away Greer stepped on the gas in the ninth round and landed the more telling shots, causing the top of Potapov’s head to redden from the clear shots. Greer tried to punctuate the fight in the eleventh and twelfth but Potapov countered well and even caught Greer walking into a straight right hand flush in the face which dazed Greer for a moment. Greer went back to the body in the final round and moved around more, allowing for Potapov to swing and miss a few times.

Greer has now won 18 in a row and 10 of his last 12 inside the distance since suffering a draw and a loss back to back in 2015. Greer’s career skyrocketed on a Shobox card in 2017 when his knockout of then unbeaten prospect James Smith became an early knockout of the year candidate. 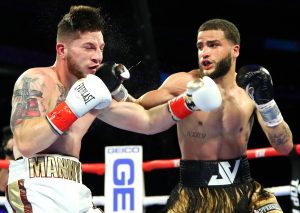 The 21-year-old Vargas had Lopez hurt several times in the bout, but it was in the seventh round when Vargas started mixing in some body shots that opened Lopez up for the big punches upstairs. The southpaw landed a huge straight left hand, forcing Lopez to cover up against the ropes. Vargas let off another right to the body followed by a left uppercut upstairs, popping Lopez’s head straight up. Vargas followed up with three more unanswered uppercuts and then was about to unload a looping left hook when referee Sparkle Lee mercifully got in between the combatants and stopped the bout.

Vargas has now won eight in a row since suffering the lone blemish of his career in October 2016, when he was disqualified for hitting Samuel Santana on the break. Santana was unable to continue and Vargas took the loss. Since then, Vargas has left Mayweather Promotions and signed with Top Rank, which has kept him busy rebuilding his fan base in the New York City area. Vargas also took his training camp to California to train with Robert Garcia which also includes dozens of rounds sparring with knockout machine Vergel Ortiz.

In super middleweight action, India’s Vijender Singh improved to 11-0 (8 KOs) by scoring a fourth-round TKO victory over Michael Snider (13-6-3, 8 KOs). The official time of the stoppage was 1:23 of the fourth round.

Making his first appearance as a professional in the United Sates, Singh hurt Snider with a straight right hand, sending the West Virginia native into the corner to cover up. Singh, sensing an opportunity, moved forward launching a solid four-punch combination for which Snider had no answer. After the last looping right hook connected from Singh, referee Shada Murdaugh jumped in to halt the bout.

This was the first bout for the 33-year-old Singh in over a year and half since taking time away from boxing to heal from an injury and an unsuccessful run for congress back home in India. The decorated amatuer won the bronze medal at the 2008 Olympic Games in Beijing.