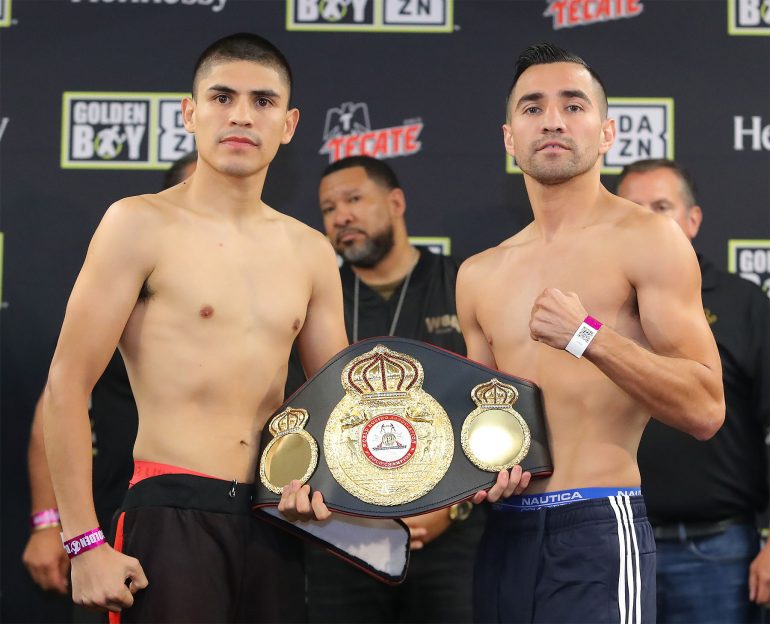 Diego De La Hoya does not want anything handed to him. The unbeaten junior featherweight appreciates the opportunities his famous last name have afforded him, but he wants to fulfill his dream of becoming a world titleholder on his own terms.

At Friday’s weigh-in, both De La Hoya and Rios weighed in at 121 pounds.

De La Hoya (21-0 1 NC, 10 knockouts), who resides in Mexicali, Mexico, last fought on Apr. 13, when his fight against veteran Enrique Bernache was stopped in the second round when an accidental clash of heads opened a cut over the left eye of Bernache, preventing him from continuing.

The 24-year-old De La Hoya was scheduled to fight in Mexicali on Nov. 17, which would have been his first fight as a pro in his hometown. De La Hoya had to withdraw from the fight two days before the fight after confirmed reports of De La Hoya passing out as a result of attempting to make weight.

After consulting with Golden Boy, which promotes him, and manager/ cousin Joel De La Hoya, De La Hoya decided to stay at 122 pounds.

“I’ve turned that page on that part of my career,” De La Hoya told The Ring last week. “We trained smarter and did not have to fight at the end to make weight. Now we stay focused on the task at hand against Ronny Rios because I believe this is my year.”

De La Hoya, who is the younger cousin of Oscar De La Hoya, does have a victory over former world bantamweight titleholder Randy Caballero. Rios (30-3, 14 KOs) will be another solid test for De La Hoya and tensions mounted at the weigh-in as Rios refused to participate in the customary stare down.

Rios has split his last four bouts, but De La Hoya is not overlooking the Mexican-American who resides in the Los Angeles suburb of Santa Ana.

“It will be a great fight,” said De La Hoya. “An explosive fight. We know each other well. We’ve sparred against one another. We know each other’s qualities. I think the fans will expect an action fight. They’ll want a rematch, but a great battle.”

De La Hoya is ranked No. 3 by the WBA. An impressive win over Rios could put De La Hoya amongst the elite fighters in the division, but he believes he is ready to face any of the world titleholders at 122 pounds.

“I’m ready for a world title fight. The promotion (Golden Boy) has faith in me that I can become a world champion. I’m motivated and I’m working hard in the gym that these 18 years in the sport of boxing count for something.”

De La Hoya is well-skilled, but some critics wonder if he has benefited from having the famous last name. Others have wondered whether he has been matched too well (besides the Caballero fight) or whether he has hit his ceiling.

For all the criticism he has received, De La Hoya wants to create his own path towards a world title opportunity and not rely so much on his last name.

“It’s a great responsibility when I started my career. Everyone around the world knows the name of De La Hoya. I have to admit that at the beginning, it was difficult for me to be reminded of my cousin. However, the last name has opened many doors for me. I am making a name for myself and that’s important to me.”

De La Hoya believes an impressive victory over Rios could open several doors later this year or in 2020 to prove he is the best junior featherweight in boxing.

“(I can be) number one soon. I have that hunger to be a champion. That’s what I wish for. I want to fight all the champions and I want to be number one.”