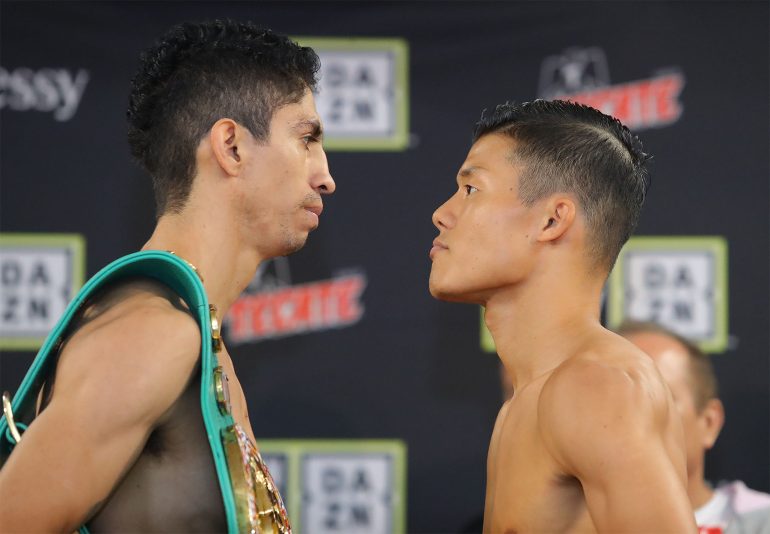 Rey Vargas is peaking at the right time as a prizefighter. He is unbeaten, a world titleholder and is co-promoted by two major promoters.

All of this would not be possible if it was not for his hard work in the gym, but also from the work he has put in with his father and famed trainer Ignacio ‘Nacho’ Beristain.

Vargas will again rely on the 79-year-old Beristain Saturday night when he squares off against mandatory challenger Tomoki Kameda at Dignity Health Sports Park (formerly known as the StubHub Center) in Carson, California. The 12-round bout will headline a four-bout DAZN stream (9 p.m. ET/ 6 p.m. PT).

At Friday’s weigh-in, both Vargas and Kameda weighed in at 121.4 pounds.

Vargas (33-0, 22 knockouts), who resides in the Mexico City area, will be making the fifth defense of the WBC junior featherweight title he won in February of 2017, when he defeated Gavin McDonnell by majority decision. In his last bout on Feb. 9 in Indio, California, Vargas overcame a knockdown to defeat Venezuela’s Franklin Manzanilla by unanimous decision.

The 28-year-old Vargas will be defending against Kameda, who became the mandatory challenger on Nov. 12, defeating Abigail Medina by unanimous decision in his hometown of Tokyo. Kameda has won his last five bouts since back-to-back losses to Jamie McDonnell in 2015.

Vargas understands the challenge Kameda will bring to the ring Saturday night.

“All the Japanese fighters are very strong,” Vargas told The Ring in an interview over phone earlier this week. “They have no quit. I’m going to go in there and do my job. I will demonstrate who I am as a champion and what I’m capable of against Kameda.”

Aside from the McDonnell fight, Vargas’ recent fights have been dominant or one-sided. At almost 5’8”, Vargas has utilized his significant height and reach advantage to outbox his opponents.

Vargas will be without that height and reach advantage Saturday as Kameda (36-2, 20 KOs) stands almost as tall as Vargas. Even as the fight is on even playing fields, Vargas believes his skill-set will carry him to a victory over Kameda.

“None of these previous fights have been easy,” said Vargas, who is co-promoted by Golden Boy Promotions and Promociones del Pueblo. “It may look easy, but I’ve trained very hard, including this fight against Kameda. I can box or stand and trade against any opponent.”

“Every fight is difficult and styles make fights. It depends on how each rival comes out. Kameda may be aggressive or look to counter. I can implement any style based on what he will do in the ring.”

Vargas, who is ranked No. 2 by The Ring, is hoping for a unification fight with the other titleholders at 122 pounds, should he come out victorious against Kameda. Danny Roman is now the WBA and IBF titleholders, while Emanuel Navarrete owns the WBO title.

Vargas will continue to push for Golden Boy and Promociones del Pueblo to reach out to Matchroom Boxing and Thompson Boxing, which promotes Roman, in attempt to finalize a fight for later this year or in early 2020.

“I have been asking for these fights. Whether against Roman or ‘Vaquero’ (Navarrete). Roman has the two belts and I would like to fight him in a unification fight. That is something that boxing fans want.”

With the success he has had throughout his career, Vargas is thankful to his father, Carlos and trainer ‘Nacho’ Beristain. Vargas believes the confidence he has had in the ring is because of what both men have instilled in him.

“My father trained me throughout my amateur career and Nacho has been my trainer throughout most of pro career. I have become more confident with each fight and it is because of both of them. Their experience has been beneficial and important to me. I’ve utilized their teachings and instructions and adjusted to all opponents in the ring.”

“My goal has always been to be number one in the division. I have a world title and it’s something important that is important to me. I want to be the best.”