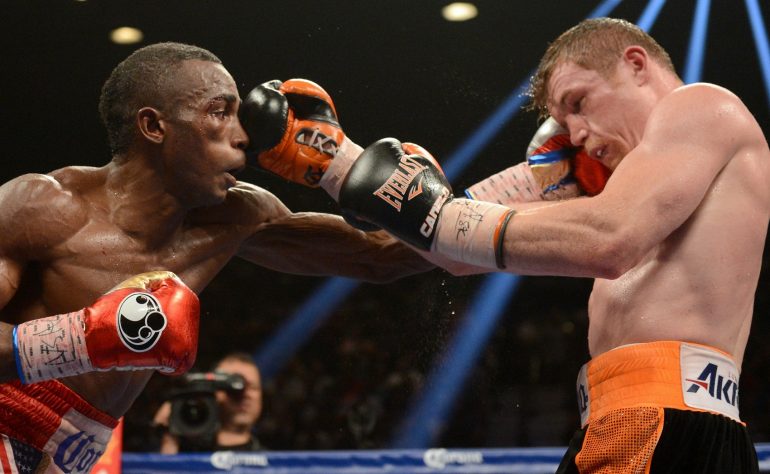 Erislandy Lara will get the chance at a measure of revenge for his loss to Canelo Alvarez. Photo by Naoki Fukuda
12
Jul
by Francisco Salazar

Erislandy Lara will have an opportunity to avenge his split-decision loss to Canelo Alvarez. Sort of.

Lara will square off against Ramon Alvarez, the older brother of Canelo, on Aug. 31, Premier Boxing Champions (PBC) officially announced. The 12-round bout will take place at The Armory in Minneapolis, Minnesota.

Also taking place on the card will be the rematch between super middleweight contenders Peter Quillin and Caleb Truax. Both fights will air live on FOX and FOX Deportes (8 p.m. ET/ 5 p.m. PT).

The clash between Lara and Alvarez will be part of a WBA junior middleweight tournament. The winner between the two will square off against the winner of the July 20 clash between France’s Michel Soro and Magomed Kurbanov, who will be fighting for the WBA ‘regular’ title.

Lara (25-3-3, 14 knockouts), who is originally from Guantanamo, Cuba and now lives and trains in Houston, fought to a draw in an action fight against then-WBA ‘regular’ titleholder Brian Castano on Mar. 2 in Brooklyn, New York. Castano was recently stripped of the title after failing to sign a contract to face Soro, who was the mandatory challenger.

The Castano fight was the first for the 34-year-old Lara since his back-and-forth battle against Jarrett Hurd on Apr. 7 of last year, a fight Lara lost by split-decision. The fight against Alvarez will mark almost two years since Lara’s last victory, a decision win over Terrell Gausha in October of 2017.

“The fight against Ramon Alvarez is personal for me, as I have history with the Alvarez family,” said Lara, who is trained by Ronnie Shields. “Expect another great fight and a spectacular performance. I can’t wait to perform at this tremendous venue in Minneapolis. I’m going for the knockout.”

The clash against Lara will mark Alvarez’s second time fighting in the United States. Alvarez faced Brandon Rios in a crossroads bout on Nov. 17 in Mulvane, Kansas and was stopped in round nine.

“I am very excited for this opportunity to fight for a chance at a world title,” said Alvarez. “I’ve worked hard my whole career for a fight like this and I’m going to take advantage. My brother beat Lara a few years back and I’m going to be the next Alvarez to beat Lara.”

The bout between Quillin (34-1-1 1 ND, 23 KOs) and Truax will be an IBF super middleweight title eliminator and a rematch from their last bout on Apr. 13. The fight ended in a no decision after an accidental clash of heads opened a cut over the right eye of Truax.

“I’m going to finish what I started this time,” said Quillin, who had won his previous two bouts after losing by knockout to Daniel Jacobs in December of 2015. “I’m treating this like any other fight and working hard to put on my best performance on Aug. 31. I was in control of the first fight and ready to go for it. I’ll be ready again for a dominant statement when we get back in the ring.”

Truax (30-4-2 1 ND, 19 KOs), who resides in the Minneapolis suburb of Saint Michael, lost the IBF title to James DeGale by unanimous decision on Apr. 7 of last year. The 35-year-old Truax bounced back to stop Fabiano Soares of Brazil by knockout in round three on Aug. 24, which also took place in Minneapolis.

“I’m ecstatic to have the opportunity to run it back against Peter Quillin at home again at The Armory,” said Truax, who has a Bachelors degree in sociology from the University of Minnesota. “The ending of the first fight was a huge buzzkill to what had shaped up to be a great night. We obviously have unfinished business and I am again confident I will get the job done.”

Truax is ranked No. 8 by The Ring.

Opening the FOX telecast will be a 10-round bout between 6’6” junior middleweight Sebastian Fundora (13-0, 9 KOs) of Coachella, California and Cincinnati’s Jamontay Clark (14-1, 7 KOs).