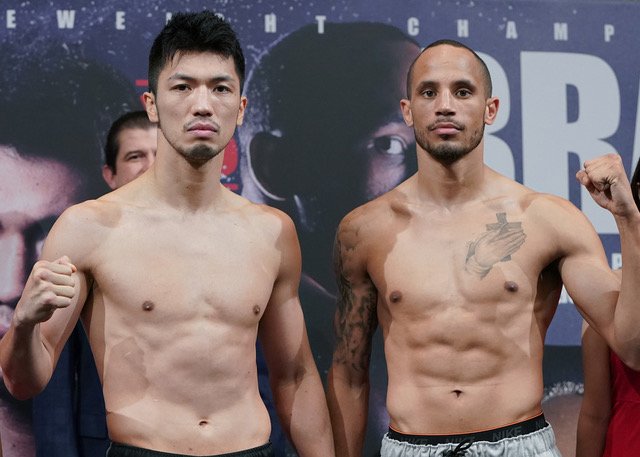 Ryota Murata made an emphatic statement in his return bout with Rob Brant, stopping the tough as nails American in the second round Friday at the EDION Arena in Osaka, Japan.

The end came at the 2:34 mark as Luis Pabon stepped in to halt the one-sided affair, putting the 2012 Olympic gold medalist Murata (15-2, 12 knockouts) back on track for the big fights Top Rank had been trying to maneuver for him before Brant’s upset decision win over him last October.

Brant came out busy, just as he had in the first fight, but Murata met him at center ring, pushing him back with his heavier blows. The two exchanged blows and neither made the other miss often, but it was clear that Murata was the one doing greater damage as he stunned Brant (25-2, 17 KOs) with two right hands with 15 seconds remaining in the round.

Less than a minute into the second, Murata landed a right hand that stunned Brant and sent him reeling into the ropes. Murata beat Brant from corner to corner, throwing right hands and left hooks from varying angles while Brant struggled to cover up. Brant finally tumbled backwards 30 seconds later for the first knockdown of the fight, but did little holding to survive, opting instead to try to fight his way out of trouble.

That enabled Murata to land his blows more effectively, and after another minute of sustained punishment the fight was halted.

Murata, 33, has now avenged both of his losses by technical knockout, having stopped Hassan N’Dam in the 2017 rematch of N’Dam’s controversial split decision win earlier that year. He also regains his WBA “regular” middleweight belt in the process.

Murata wasn’t the only Japanese star to score a big win. Ken Shiro (16-0, 9 KOs) scored a fourth round stoppage of no. 1 contender Jonathan Taconing to retain his WBC junior flyweight title for the sixth time.

Taconing had his moments in round two, catching Shiro with power shots as Shiro pulled straight back. Shiro, utilizing his superior footwork, was able to get in and out of range with counters but was ruffled by Taconing’s physicality in close. The fight took a turn midway through the third when an accidental head clash opened a massive gash through the right eyebrow of Taconing, resulting in a point deduction from Shiro.

Shiro used Taconing’s aggression against him, dropping him with a right hand counter that sent Taconing down face first. Taconing rose up but was on unsteady legs, prompting the ref to stop the fight at the 1:00 mark.

The upset of the night came in the co-featured bout as Satoshi Shimizu, a bantamweight bronze medalist at the 2012 Games, was stunned by Filipino Joe Noynay, losing by sixth round stoppage in their twelve-round scheduled junior lightweight bout.

In the matchup between two southpaws, Noynay (18-2-1, 7 KOs) landed harder, dropping Shimizu (8-1, 8 KOs) with a left hand high on the head midway through the first. Shimizu didn’t appear hurt by that knockdown. The second one which came 30 seconds later was the result of a straight left to the chin, and that had a greater impact.

Shimizu was able to turn the tide briefly in the third, hurting Noynay with a left hand counter and forcing him to the canvas with a push, but his inability to stop the straight lefts began to tell on his face as Shimizu’s right eye was closed and nose was bloodied.

The fight was nearing its end when the doctor was called in to take a look at Shimizu’s increasingly misshapen face. The doctor gave the OK to continue, but after a few more blows Shimizu turned his back to quit. The referee was slow to acknowledge, and in the confusion Noynay rushed in with two punches that knocked Shimizu down.

The fight was finally stopped at the 2:18 mark.

Noynay, who hails from the same city – Bogo, Cebu – as Filipino legend Gabriel “Flash” Elorde, has now won his last six fights, including his second straight in Japan after knocking off Kosuke Saka in two rounds this past April.